Suspense the Hard Way: Writing Suspense Stories When You Already Know the Outcome


by Paul D. Marks
In early June, I attended the California Crime Writers Conference in Culver City in the LA area. I was on a panel called Thrills and Chills. The panel’s topic was suspense, how to create it, sustain it, etc. Many good points were made by my fellow panelists, D.P. Lyle, Craig Faustus Buck, Laurie Stevens, Diana Gould, moderator, and I hope by me too. Being on that panel got me thinking about what defines suspense? Is it a cliffhanger? A surprise ending? A reversal? A twist? All of which is part of it. Or is there something else? But I’ll leave the micro mechanics of suspense writing for another time. What I want to talk about here is a certain type of suspense/thriller that’s based on real events and/or people. 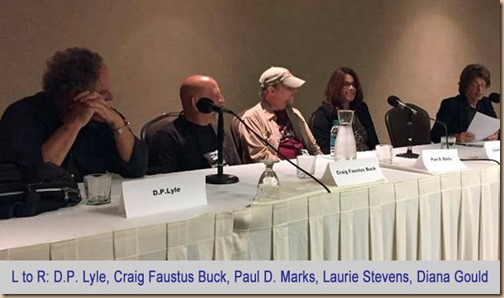 When one’s writing a fictional story with fictional characters it’s one thing. It’s another thing completely when you’re writing a story based on a real character or characters and situations, because, if the reader is halfway literate (which is getting more and more iffy all the time), they will know the outcome of the story before they read the first word.

Some cases in point: 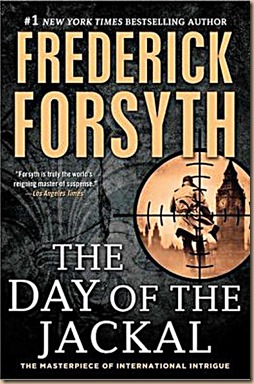 My favorite example of this is The Day of the Jackal, by Frederick Forsyth. The book came out in 1971, about a year after Charles de Gaulle died. It’s a suspense-thriller about an attempt to assassinate de Gaulle in the early 1960s. I remember reading the book when it came out, turning page after page. Sneaking a read here and there because it kept me so engrossed. And I knew how it would end. At least I knew de Gaulle would not be assassinated, because I knew that in real life he wasn’t murdered. So the incredible thing about that book for me is how the author kept me, and others, interested when we knew the outcome. An amazing feat. And how he had us rooting for the Jackal to succeed, even though we knew he wouldn’t, and even if in real life we wouldn’t have wanted that.

In The Eagle Has Landed, Jack Higgins’ thriller, Nazi commandos allied with Irish revolutionaries attempt to kidnap British Prime Minister Winston Churchill during World War II. Complications ensue. But once again, we know the outcome in real life: Churchill was never kidnapped. Still, Higgins manages to keep our attention and keep us guessing—will they succeed? Or is this an alternate history with a totally different outcome from what really happened?

And my wife and I just recently watched Bugsy again, the Warren Beatty movie about the notorious gangster Bugsy Siegel. Again we knew the ending. We knew he got murdered, we knew pretty much the how and why, at least according to the movie. Yet still we were glued to the screen. (And as a side note, I grew up across the street from Bugsy’s brother, a doctor—and his family—who Bugsy put through medical school.)

A couple other movies that come to mind are an oldie but goodie, Manhunt, with Walter Pigeon, and 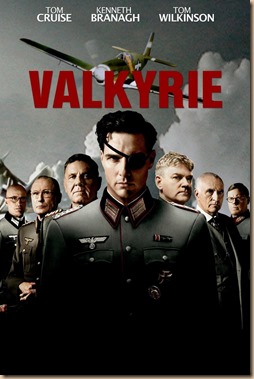 a newer flick, Valkyrie, with Tom Cruise. Both are about plots to assassinate Hitler, and if anyone deserved it, well..., but I digress. Manhunt is a fictional story, to my knowledge, and, as it was made in 1941, World War II was still going strong. So who knew at that time, maybe a plot to kill Hitler was going to happen? But the fact is the story is fiction, and Hitler was still alive and kickin’ when the movie came out. So people watching it then knew the ending wasn’t going to work out, at least not when the movie was released. But somehow the suspense worked and you are sucked into believing it. Valkyrie, based on a true story, came out in 2008, so everybody knew, well almost everybody, well maybe nearly almost everybody, well maybe a handful of people knew, that Hitler hadn’t actually been assassinated. But again the story was like a roller coaster ride at Magic Mountain. You were still rooting for the conspirators to kill Hitler and to get away with their lives even when you knew they wouldn’t. There’s also Argo, with Ben Affleck, and we knew the outcome there too, but were still on the edge of our seats, waiting to see if that group of people would get out of Iran alive.

So how do these authors and filmmakers keep us interested and involved when we already know the outcome?

The suspense comes from empathizing with the characters, wanting them to get away or even succeed, even if you know they can’t/won’t and even if they’re anti-heroes or badguys. You want them to come out of it alive. Since you know from the get-go that the mission fails, you have a sense of suspense in hoping the character won’t be injured and will get away in the end. We’re also interested in the how of it—the how-dun-it? How do they plan to achieve their aim of killing de Gaulle or Hitler or kidnapping Churchill?
Also, like the ticking bomb in Hitchcock’s example of suspense (see sidebar), the reader knows they’re going to fail so you’re watching them run towards the “ticking timebomb,” hoping they’ll escape before it’s too late. But with Day of the Jackal, also what makes the reader want the killer to succeed? Isn’t he a “bad guy”. Why don’t you want the other characters to succeed in catching him?

So how does a writer achieve this? A full answer would probably take a book, but briefly: Initially you might not be rooting for the anti-hero. But as the author introduces you to the character and his/her goal you might start identifying with them and their mission. And even though you know their mission is a bad one, like kidnapping Churchill that might have changed the outcome of the war, you still feel a sense of suspense in wanting them to either get caught or succeed. It’s not because you identify with the Nazis per se, but you identify with these individuals and their efforts to achieve their goal or you’re hoping like hell that they won’t. And just like with any other character, the author puts them in jeopardy and puts obstacles in their way so the reader wonders whether or not they’ll get out of it. Also, sometimes villains can be charming or tough or cool. We admire their skill and caginess and we want to live vicariously through them and their adventures.

Sometimes the outcome isn’t the most important part of a story. It’s the ride getting there. So, while a spectacular ending may be good in some books, for some it is more important to build great characters and suspense and not rely on a surprise ending to leave the reader with a good feeling. In a way you have to work harder on the meat of the story when readers already know the outcome, but it is one way you can really distinguish a writer who is a master of suspense—when they can still build suspense with a known outcome.

So sometimes suspense isn’t just about the surprise ending or the unexpected, sometimes it’s about knowing what’s going to happen but wanting something different to happen and how that in itself can create tension, suspense and a great ride along the way.