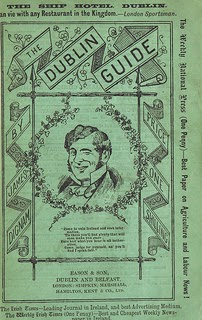 I was watching the local Saint Patrick's Day parade (lots of horses, bicyclists, and bagpipers, all drenched in green), and suddenly an old memory popped into my head.  So I thought I would share this anecdote discussing the profound influence crime fiction has had on popular culture.  Or possibly it's just a silly story.  But to the best of my knowledge and memory, it's true.

I went to high school in New Jersey.  Every March 17 people at my school celebrated Saint Patrick's Day in the usual way.  Wear green or get pinched.  KISS ME I'M IRISH buttons.  Shamrock jewelry.  Nothing unusual there.

But there were some people of Italian ancestry who got irritated. Why did the Irish get all the attention?  And so they announced, completely inaccurately, that the day after Saint Patrick's Day was Saint Luigi's Day, a celebration of Italian-American heritage.  And they came in, dressed appropriately.

Now, this was just after Mario Puzo's classic novel The Godfather was published, so that was how they chose to dress.  Like 1940s gangsters.

Do I need to say I'm not making this up?  I should probably say that while I am half-Italian and one-eighth Irish, I was not part of this group.

Every year it got more and more elaborate.  By the time I was a senior some of the celebrants were arriving on March 18th in  a rented limousine with violin cases containing toy machine guns.

(And let's ponder that for a moment.  What would happen nowadays to a high school kid who even suggested bringing a toy machine gun to school?  He'd be on a plane to Guantanamo before gym class.)

So at long last we graduated and went off to jobs or academe.  One friend of mine, Tim, went to college in Baltimore where he shared a house with several other students.  One day a housemate was strolling through an alley (and what he was doing in a Baltimore alley alone is probably a good story in itself, but I don't know it.)  There, lying on top of a trash can, was a dry cleaner's bag.

He peeked inside and saw a suit.  Not just any suit, but the kind of suit you would expect to see in the movie version of The Godfather.  Apparently someone had taken this gangster-style outfit to the dry cleaners, picked it up, and then threw it out.  Why?  Who knows?

Tim's friend took it home, check it for bloodstains and bullet holes, and tried it on.  Alas, it was too slim for him.  (Maybe that was the original owner's problem too, come to think of it.)  It turned out to be a perfect fit for Tim, so he graciously passed it on.  Now all Tim needed was an occasion to wear it to.

Now it happened that Tim's university. like many others, had an event called Casino Night, where students could gamble with tokens.  Perfect!  And Tim had a friend who made his pocket money betting on this or the other, and sometimes wore an outfit Tim referred to as "racetrack tout."  So picture the two of them strolling around Casino Night, catching the eye of more conventionally dressed college students.

The friend was sitting at the poker table while Tim stood behind him, standing somberly in his
gangster outfit, both of them looking like they had just strolled out of a noir picture.

And then a female college student,  unknown to Tim, marched up and demanded to know:  "Why are you dressed like that?"

Tim replied with his best Brooklyn accent (which is how people think those from the Garden State talk).  "I'm from New Joisey.  Everyone in New Joisey dresses like this."

"No!  They only dress like that on Saint Luigi's Day!"

And Tim said "WHAT?"

Turns out she had gone to our high school, a couple of years behind us.  They had never met.

I hope you had a pleasant holiday, and if you didn't wear green, I hope you didn't get pinched.  And kids, if you bring a toy machine gun to school, you will definitely  get pinched.
Posted by Robert Lopresti at 00:02 11 comments