Put The Words In The Right Order

He was a big man but not more than six feet five inches tall and not wider than a beer truck. His arms hung loose at his sides and a forgotten cigar smoked between his enormous fingers. He was worth looking at. He wore a shaggy borsalino hat, a rough gray sports coat with white golf balls on it for buttons, a brown shirt, a yellow tie, pleated gray flannel slacks and alligator shoes with white explosions on the toes. From his outer breast pocket cascaded a show handkerchief of the same brilliant yellow as his tie. There were a couple of colored feathers tucked into the band of his hat, but he didn't really need them. Even on Central Avenue, not the quietest dressed street in the world, he looked about as inconspicuous as a tarantula on a slice of angel food.

His skin was pale and he needed a shave. He would always need a shave. He had curly black hair and heavy eyebrows that almost met over his thick nose. His ears were small and neat for a man of that size and his eyes had a shine close to tears that gray eyes often seem to have. He stood like a statue, and after a long time he smiled. 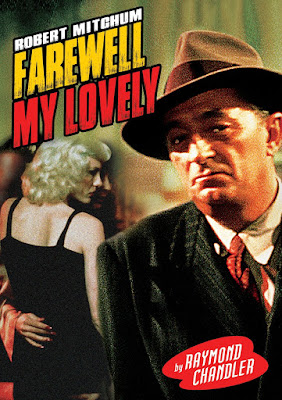 As I read this I couldn't help wondering, did Chandler actually see a huge man dressed this way? Or was it entirely from his imagination? Or a combination of real life and imagination? I always thought it a combination… surely he didn't see a real person, as huge as Moose Malloy dressed in this way, but after yesterday when I saw how a man was dressed exactly as he wanted to be. He obviously dresses like this routinely, as he seemed comfortable.

The man I saw was not big, standing probably five feet and eight inches, and from the rear looked somewhat slender until he turned around and I saw his beer belly. He was wearing a navy tank top tucked into a pair of overwashed faded blue denim farmer's overalls. The front part of the overalls had pockets for pen/pencils and I'm the sure what else the man deemed important might be stuffed inside. The overalls were rolled up to his calves, like he'd been river wading and on his feet were a pair of bright pink rubber flip'-flops. He had a silver toe ring on the second toe of his left foot and on the left ankle was a bright orange woven ankle bracelet and a wooden bead ankle bracelet. On his right ankle was another bracelet of woven material. On both wrists were bracelets, two on each side of beads and woven material.

On his head way grungy muddy-brown-rolled brim straw hat with a dark hat band. A couple of long feathers were stuck in back of the band which were knotted and had one green dice attached. Around his neck was an assortment of chains of silver or gold or woven material. He had a pair of sunglasses which he'd pushed down in order to look over them.

There's almost no way Chandler could imagine the way Moose Malloy looked or was dressed, however if you had perhaps seen some real person dressed or built this way, you could make up the rest. There's almost no way I could imagine the way the man I saw was dressed. You'd expect an editor to write you back saying this character is totally unbelievable. As I stood looking at him, I wanted to take his picture but dared not make someone angry. Yet I kept wondering, did he honestly think he looked good or okay? Maybe he was working on his Halloween costume? Had he been playing dress-up with some pre-school grandchildren and decided to make a quick trip to the store to buy something electronic for his mother? (NO, it wasn't Walmart although a picture of him would surely be voted into the Walmart you've got to be kidding, hallmark hall of fame.)

I'll admit that I love to people watch. It's great fum to sit someplace and see people and imagine them as characters in your next story or book. I've seen oddities many times. I've used a gesture I've seen someone make or the way they look. It does give you a chance to draw from those characteristics to make my characters look and act more realistic. I'm probably going to have a character looking like the man I saw eventually and I've decided he'll be an eccentric billionaire. But no one will suspect he's rich until he's dead.

Sometimes a story just writes itself, you just have to put the words in the right order.
Posted by Jan Grape at 00:01 5 comments