Although most of my writing has been mystery novels and short stories, I have also published a number of contemporary novels, as well as short stories in other genres. For this reason, I am always interested in novels that combine genres or generally break the usual compositional rules.
Erin Morgenstern's The Starless Sea, a love letter to reading, books, and stories of all types, is a fine example. Distinguished by an intricate plot that mixes myth, fable, adventure, and mystery, its greatest strength turns out to be an incredibly detailed and imaginative setting. 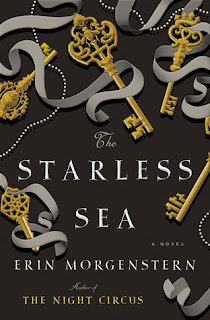 We like to say that character and plot are absolute keys to success and normally they are. In the case of The Starless Sea, however, while the plot is effective and the protagonists, likable enough, what one is apt to remember is the creation of an alternate world, dominated by books and stories, far beneath our feet.

Clearly this world, without sun or visible means of ventilation or food production has many, many implausibilities, not to mention the sea of honey, the bees, the Owl King, the seemingly wise cats, and the immortal Keeper. But never doubt the power of a good storyteller. The Harbor where Zachery Ezra Rawlins enters (via an elevator in New York's Central Park) is described with such precision and such a wealth of detail, that it is easy to suspend disbelief. And well worthwhile, too, because that alternate world is where the various stories, some no more than a page or two, some newly-invented fairy tales, and some full-fledged adventures, all come together.

Zachery is a graduate student in Emerging Media, who finds that all he really wants to do is read after a romance goes sour. Scanning his university library's bookshelves, he chances upon Sweet Sorrows, an anonymous volume from a mysterious donor, that recounts an incident in his own life. This triggers a bibliographic mystery, which, in turn, leads him to adventures with members of a mysterious society and their enemies; to Dorian, to whom he will lose his heart, and to Mirabel who may be human or may be a metaphor, but who knows her way around the starless sea and its harbors.

Zachery winds up below ground, while in the upper world, life goes on for people like his friend Kat, an aspiring game designer also enthralled by fiction. At the same time, in another dimension, one of fables and myths, various stories unfold, interesting oddities what will all be eventually pulled into the overall narrative. This complicated structure must have presented many challenges for the author, but the breaks have a useful function. They interrupt what might have become an overly claustrophobic and precious atmosphere of the vast libraries of the starless sea venues, whose very physical structures are sometimes devised from stories on paper.

The narrative spine is provided by Zachery's adventures, interwoven with the experiences of the heroic Dorian; of Eleanor, who literally fell into the Harbor as a young child and of Simon, later her lover and man lost out of time, along with appearances by the enigmatic Mirabel and her antagonist Allegra, the Painter, who wants to preserve a world that both Mirabel and the Keeper know is in decline.

The line of the novel only becomes clear in its closing stages, but the adventures of the main characters prove strong enough to support the weight of fantasy and myth and, yes, the many metaphors, that fill the book. A clue to the author's ambitions comes when Kat reflects on the type of game she would like to construct: " Part spy movie, part fairy tale, part choose your own adventure. Epic branching story that doesn't stick to a single genre or one set path..." She concludes, "A book is made of paper but a story is a tree."

So speaks the video gamer.

But in The Starless Sea Erin Morgenstern has done something similar the old fashioned way with print on paper.