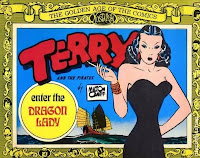 A long time ago I read a pretty good book called "The Asian Mystique:  Dragon Ladies, Geisha Girls & Our Fantasies of the Exotic Orient" by Sheridan Prasso.  (The "our" being the West, of course.)  The sleek, dangerous, powerful, seductive Dragon Lady; the submissive, elegant, sexually available geisha/concubine; the perky, young bar girl who can be saved by the right man - and if it sounds familiar, it should, because most of it is just endless repetitions and variations on the whore with a heart of gold. I can say this because each and every one of these fantasies exists in Asia, too.

But there are real characters behind them.  We're going back in time to the Tang Dynasty in China (618-907 CE), considered by many to be the high point of Chinese culture - the great age of art - painting, ceramics, poetry - and power.  Its capital, Chang'an, was the largest city in the world.  It was also a great age for Chinese dynastic conquest - as you can see from this map:

And during the early Tang, two women rose to power within 100 years of each other, two women who are household names, who once held great power, seduced emperors, and (depending on who's telling the tale) nearly ruined China in the process.

In 638, Wu Zetian became a concubine of the Taizong Emperor.  She was beautiful, smart, and mind- bogglingly ambitious.  But the Taizong Emperor died in 649 CE, and Wu, like all imperial concubines at that time, was ordered to become a Buddhist nun, complete with shaven head.  She did.  But somehow, in seclusion, drab robes, and with a shaved head, she attracted the attention of the next emperor, her dead husband's son, Gaozong, who brought her back to the palace.  His empress was not amused.  Nor was anyone else - this was completely shocking to both Confucian and Buddhist morality - a man taking his father's concubine who was also a nun?!?!?!

Anyway, he took her to the palace, and she went to work at gaining power.  She had the empress executed on the grounds that the empress had poisoned Wu's daughter by Gaozong.  (Legend has it that Wu killed her own daughter herself so that she could blame it on the empress.)  She had another concubine, a former favorite, killed.  The Gaozong Emperor himself had a series of strokes in 665 CE that incapacitated him (legend says poison administered by Wu), and Wu began sitting behind a screen behind the throne and giving orders. For the next 18 years, she ruled in his name.

When the Gaozong Emperor died in 683 CE, Wu became the Dowager Empress Wu, ruling as regent for her two sons who never quite made it to adulthood (legend has it...  you can guess).  Finally, in October, 690 CE, she officially took over.  She declared herself Emperor - not Empress - Emperor Shengshen, head of the new, Zhou Dynasty (named after her own family).  She was the only woman in 2100 years of  Chinese history to sit on the Dragon Throne itself.  She bolstered her claim by citing a Buddhist sutra (that I for one have never been able to find) that said a woman would rule the world 700 years after the death of the Buddha.  She ruled for the next fifteen years and, other than trying to wipe out the remaining Tang heirs, she was pretty good at ruling.  (She had a thing for young men, but then so did Catherine the Great.  So did Frederick the Great, but we won't go into that...)  She was finally deposed at the age of 80, and died nine months later.

The Empress Wu has gone down in Chinese history as one of the most duplicitous, salacious, lustful, evil women in history, and she's been used ever since her death as the reason why women should never rule China.

After the Empress Wu died, her son became emperor, who was succeeded by her grandson became the Xuanzong Emperor (685-762 CE).  He was a great emperor in many ways, and a major patron of the arts, but he was dominated by his favorite concubine, Yang Guifei.  This led to one of the few great love stories of China, and, like the tale of Empress Wu, was given as a reason to keep women out of politics.

Yang Guifei was the wife of Xuanzong's son when he met her.  He ordered his son to divorce her, which of course the son (as a good Confucian) did, and had her put in a Buddhist nunnery.  A couple of years passed, and probably a lot of people had forgotten about that obscure ex-wife in a monastery - but then she was brought out, brought to court, and made Xuanzong's concubine.  Which was sort of fine (Father is always right), except he was obsessed with her.


Her family all got promotions, imperial messengers traveled night and day to bring her her favorite foods, and he never let her out of his sight.  Ever.  His work suffered.  Yang Guifei's favorites were taking over administration.  Eventually, one of her favorites, a strapping young man named An Lushan, launched a rebellion in 755 CE that actually captured the capital.  She was blamed for all of it.  The rebellion was crushed, but the army forced her execution.  She was strangled at a Buddhist shrine and the Emperor was forced to abdicate.


Yang Guifei and the Emperor have had innumerable operas, plays, and, later movies and television shows written about their love, and their great disaster.  Some present her as the author of all the trouble, others as a scapegoat.  (She's also a favorite subject in Japan, where there have been Noh plays and a legend that she actually escaped to Japan.)  The most famous is the Chinese poem "The Song of Everlasting Sorrow" by Bai Juyi:
http://en.wikisource.org/wiki/Song_of_Everlasting_Regret#cite_note-20

So, a Dragon Lady and a Concubine.  The sexy bar girl?  Well, try Jiang Qing, (1914-1991) who began life as the daughter of a failed concubine, became a fairly poor film actress, and met and married the most powerful man in China, Mao Zedong.  She was his fourth and last wife; he was her fourth and last husband.  He modeled himself on the Qin Shihuangdi Emperor; she modeled herself on Empress Wu.  She called herself, after his death, when she was on trial for the crimes of the Cultural Revolution, "Mao's Dog".  She is called to this day the "White Boned Demon".  Who says that only the West has fantasies and cliches?