Interesting Books by Not So Big Names

In the book business today, a handful of big names and celebrity personalities use up most of the promotional oxygen. The result, as any writer knows, is that a host of worthy and interesting volumes get overlooked. Three concerned with crime might be worth your time, although only two of them are strictly speaking category mysteries: Donald Rae Pollock's The Devil All the Time, Karen Fossim's Bad Intentions and Lene Kaaberbol and Agnette Friis's The Boy in the Suit Case.

Easily the most flamboyant is The Devil All the Time, which got quite a bit of literary attention last year, in part because of Pollock's interesting personal history, which includes leaving school at 17 to work in a meat packing plant and thirty years in a southern Ohio paper mill. Clearly this was not someone who rushed prematurely into writing.

His earlier collection of stories, Knockemstiff, was set in the Ohio town of the same name where he lives. The Devil All the Time shares that venue with a West Virginia hamlet, and which is the more toxic venue is hard to decide. Both are full of psychopaths, often of a religious persuasion, and include a pedophile evangel, husband and wife serial killers, a World War II vet, deranged by his wife's terminal cancer, a corrupt sheriff, and a variety of lost souls, revivalists, and small town losers.

The good news about The Devil All the Time is that it is wonderfully written in a vigorous, but not stultifyingly profane, vernacular. The plotting is ingenious, and all the many plot strands and lose ends are satisfyingly, and plausibly, wrapped up. So is it just scribbler envy that produces my reservations?

Maybe, but maybe not. Folks with long memories will recall that periodically a novel about the depraved underclass -this one, the white, protestant underclass of the Midwest and the Appalachians- proves popular. I don't know if the novel's critical acclaim is related to the politics of the moment, but Pollock certainly heaps on the misery without restraint. The serial killers alone would have been a pretty rich blend. Combined with Willard Russell's blood-soaked 'prayer log,' abusive behavior in nearly every chapter, and a truly far out pair of revivalists, one does begin to think that far from being 'gritty realism,' this is fantasy of a particularly gruesome sort and that some really fine gifts have been employed with more 'sound and fury' than substance.

The other two novels are both Scandinavian semi-noir. Norway's Karen Fossum is one of those low key and subtle writers whose books aren't going to be transformed into doorstop sized best sellers. She's not nearly as flashy a writer as Pollock, but she has a real feel for grief and for the consequences of violent action. Bad Intentions is told from the point of view of the perpetrators, an unusual and tricky ploy, given that the initial, fatal, crime is over when the book begins. Fossum pulls it off nicely.

All the characters are well drawn, with the possible exception of one genuine sociopath, and surprisingly sympathetic, and, as a result, the novel is sad. Don't read this when you are in need of something bracing and cheering. For that, you're better with Alexander McCall Smith's The Saturday Big Tent Wedding. 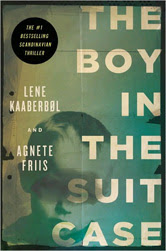 The Boy in the Suitcase is a Danish import with a plot line to give any parent, particularly any single parent, the willies. The writing is functional, using the modern style of short chapters and multiple points of view to keep the plot moving, and once the action kicks in, it's a genuine thriller. Ignore the often shaky motivation and enjoy an effective take on the familiar Scandinavian Noir features of domestic abuse, illegal immigrants and the arrogance and entitlement of top people in a wealthy society.

Like The Devil All the Time and Bad Intentions, The Boy in the Suitcase reflects our changing view of the sexes. In The Devil, almost everyone is depraved but the women are either brain dead or idealized. Bad Intentions is pretty even handed, although women are still seen as especially vulnerable to charismatic men.

The Boy in the Suitcase, reverses all this. The men are either ineffective, unreliable or brutal. The leading women are the crusaders and the avengers, and by the end, one does feel some sympathy for Nina Borg's anxious husband and children, who are left at home to worry while she attempts to save a small piece of the world.

Finally, although not a mystery or even a novel, Van Gogh, The Life, by Steven Naifeh and Gregory White Smith not only offers an enormously detailed portrait of this difficult and sad man's turbulent life but a new take on his death. According to the authors, Van Gogh's 'suicide' was more likely an accident or a homicide, and the artist, as quixotic and idealistic as he was violent and unstable, may have claimed suicide to spare the young perpetrators.

Now there's a plot any writer could get behind.
Posted by Janice Law at 00:01 2 comments