One of my Facebook groups, The Deighton Dossier (link: https://www.facebook.com/groups/deightondossier), put up a flare that The Ipcress File was newly available on a KL Studio DVD, and I immediately snapped it up.  I’m happy to report that it’s a fine color transfer, with nice, deep blacks, something the picture requires - and it’s a deal at $14 ($20 for the Blu-Ray).

It’s worth remembering that this was a ground-breaker when it was released.  Dr. No had dropped in ‘62, From With Love in ‘63, and Goldfinger in ‘64.  The Ipcress File slipped in just ahead of Thunderball, in late 1965.  Bond was a huge phenomenon – and Thunderball was the picture where Bond turned the corner toward eye-popping FX set pieces: stunts and spectacle.  Not to diminish how flat-out terrific they were, and the vigorous confidence that Sean Connery brought to the table.  I was just as ga-ga for Bond as anybody, and Bond set the bar high. 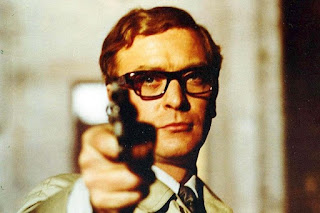 The Ipcress File is sly.  It has the confidence of the ordinary, of homely detail.  It begins with Harry making coffee.  He’s a little fussy, and fastidious.  He wears a pair of rather thick-framed glasses.  You’re not thinking some smoothie at the baccarat table, you’re wondering if he’s wandered into the wrong movie, or you did.  And then the focus begins to skew.  Otto Heller’s camera angles and Sidney Furie’s fey direction, a sort of oops, we led you to think one way, when actually you should have been looking at the fish tank off to one side (this is a rhetorical device, there are in fact no fish tanks, for which we could be grateful), and we begin to pay closer attention. The device that Ipcress File uses is to make the ordinary sinister.  Simple details seem to gain weight.  And then they don’t.  Bluejay writes a phone number down for Harry, but it’s disconnected.  Harry’s aggravated.  Dalby takes the scrap of paper, and turns it over.  It’s a program for a musical recital.  Not the number, Dalby points out, but the piece of paper it’s written on.  The tradecraft isn’t a mystery.  It’s elemental.

All of Ipcress is like this.  Half the time, it seems like everybody’s scoring points on each other.  The class issues are worn on their sleeve.  “You’ve got a good job for a passed-over major,” Ross tells Dalby.  “A word in your shell-like ear,” Dalby says to Harry, putting him in his place.  This fuels the whole story.  Ross and Dalby are offering Harry a place above the salt, and both pretending it’s of no consequence to them.  Dalby and Ross wear regimental ties, but Harry, in the end, really doesn’t give a shit.  One of them betrayed him. 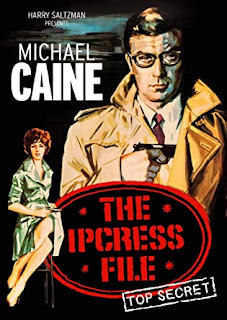 The Ipcress File made Michael Caine a star.  I know, Alfie, but that just confirmed it.  He’d done Zulu, a couple of years earlier, and he’d read for the part that went to James Booth, the slyboots lower-class enlisted, private Hook.  Cy Enfield, the director, cast him as Bromhead, the aristocratic officer.  Only because was a Yank, and didn’t know any better, Caine later said, because a Brit director would never have cast me.  Class is cast in stone.

The sound of Bow Bells.  Caine is a Cockney.  So is Roger Moore, point of fact.  He had to pretend to a kind of generic mid-Atlantic, that wouldn’t fool a Brit, but might work on the rest of us.  When the two of them worked on Bullseye! together, they were clearly having a lot of fun.  Bob Hoskins once remarked that Michael Caine opened the doors ‘for the rest of us.’  I think you might go back to, say, Albert Finney in Saturday Night and Sunday Morning.  It was a time coming.  Rita Tushingham in A Taste of Honey.

I don’t think there was any one single moment.

The Ipcress File comes close to that single moment.  It doesn’t date that badly.  The brainwashing parts are pretty lame, but the personal and political tensions are vivid.  It gives us immediate difficulties.  We might make fun of those contrived shots through the cymbals, but the revealed accidents are sudden and genuine.

In my opinion, a great movie.