Cozying Up the Facts

Melodie, here! Are you ready for Hot Crime in a Cold Climate?

In between the usual loopy columns by yours truly, I'll be introducing some of our butt-kicking, snow-loving, positively laugh in the face of Jack Frost, Canadian Crime Writers in this column.

First up is Crime Writers of Canada President, my friend and colleague, Judy Penz Sheluk. Judy has a cottage in the North-north (as opposed to the 'Near-north' as we say in the banana belt) so she is a babe to be reckoned with. Take it away, Judy!


Cozying Up the Facts

As a former journalist and magazine editor, I’m all about doing the research and getting the facts. As an avid reader of mystery fiction, I also want to learn new things from the books that I read. What might come as a surprise, however, is how much you can learn from a cozy mystery.

Let’s take the example of award winning author Ellen Byron, who includes a “Lagniappe” chapter at the end of each book in her Cajun County cozy mystery series. Included are some of the real inspirations for fictional locations, characters, and moments.

Then there’s award winning author Vicki Delany. Writing as Eva Gates, her Lighthouse Library series is set in the Bodie Island Lighthouse, just outside of Nags Head, N.C. Apart from the interior of the lighthouse, with which liberties were taken (the lighthouse is quite small), all of the geography is correct. History also factors in with Read and Buried, where facts about the Civil War era Freedman’s Colony in Roanoke are important to the story.

And of course, we all wonder how the research gets done for Melodie Campbell's mob caper comedies in The Goddaugher series!

The central theme of my latest Glass Dolphin cozy mystery, Where There’s a Will, revolves around the old Hadley house, rented out for years, rumored to be haunted, and now on the market as an estate sale. Enter protagonist and Glass Dolphin antiques shop owner Arabella Carpenter, who, along with her ex-husband, Levon, has been hired to appraise the contents of the house. Among those contents is a roll-top desk hiding more than one secret. 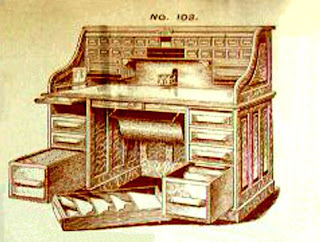 Now, I could have left the description as an “antique roll-top desk,” but what fun would that be? Instead I dug around until I discovered the Cutler Desk Company of Buffalo, NY. Not only did the company specialize in roll-top desks, they obtained the patent for the first American-made roll-top desk; in all they were granted seven patents related to the desk’s mechanism.

But wait, there’s more. During my online search, I managed to stumble onto a photograph of a Bill of Sale, yellowed in age, for a desk sold by Cutler on February 19, 1900. You can’t leave a detail like that out of a story, though, like Vicki and her Bodie Island Lighthouse, I’ve taken some liberties with the Bill of Sale that Arabella and Levon discover. Instead of the desk selling to someone in Ohio, I changed that to read T. Eaton & Co. 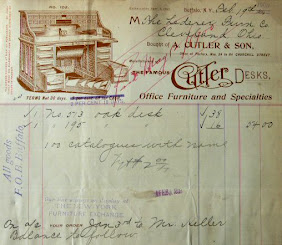 Now, I'll admit I’m not 100% positive that T. Eaton & Co. sold Cutler desks, but it’s certainly plausible: the store was headquartered in Toronto, just across Lake Ontario from Buffalo, and they do offer roll-top desks, such as the type made by Cutler, in their Fall and Winter Catalogue 1899-1900. And isn’t that a whole lot more interesting than “antique roll-top desk?”

About the Glass Dolphin Mystery Series: A cozy mystery series without cats, crafts, or cookie recipes, the Glass Dolphin mysteries follow the investigations of amateur sleuths Arabella Carpenter and Emily Garland. The books include: The Hanged Man’s Noose (#1), A Hole in One (#2), and Where There’s A Will (#3). 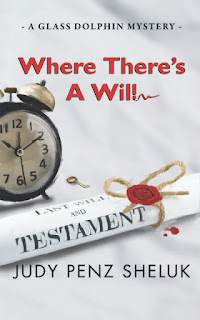 About the author: A former journalist and magazine editor, Judy Penz Sheluk is the author of two mystery series: the Glass Dolphin Mysteries and the Marketville Mysteries. Her short crime fiction appears in several collections, including The Best Laid Plans and Heartbreaks & Half-truths, which she also edited. Judy is a member of Sisters in Crime, International Thriller Writers, the Short Mystery Fiction Society, and Crime Writers of Canada, where she serves as Chair on the Board of Directors. Find her at
www.JudyPenzSheluk.com