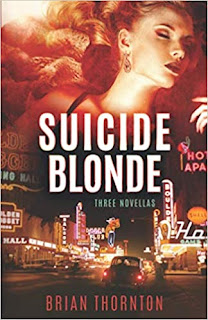 It's always gratifying to be able to announce the publication of a new work. We writers work damned hard, and as a rule we toss more than we publish. So, yes, it's nice when you can add something new to your existing body of work. It's even nicer when you can announce the publication of something on which you've toiled for a long, long time, and of which you're (hopefully justifiably) proud.
So it's with no little pleasure that I announce that on Monday, October 19th, 2020 Down and Out Books published my three-novella collection Suicide Blonde. It was the culmination of an insane amount of work over a roughly eighteen-month period, during which time I also collected and edited a pair of crime fiction anthologies inspired by the music of jazz-rock legends Steely Dan: Die Behind the Wheel, and A Beast Without a Name.
Each of the novellas in my new collection started life as a short story. Alfred Hitchcock's Mystery Magazine published the original "Suicide Blonde" way back in November of 2006. The short version of "Paper Son" found a home in the Akashic Books anthology Seattle Noir in June, 2009. And "Bragadin's Skin" was commissioned by the upstart webzine The Big Click (that rarity of rarities: a webzine that paid, and well, too!) in 2013.
So I guess you could say that these characters have lived with me for a while.
Each of these original stories managed to garner many variations of the same feedback from my loyal first readers: "I wanted to know more." "I didn't want the story to end." "I would have liked to learn more about this (or that) character." "You ought to expand it into a novel."
I decided to start smaller.
Crime fiction has a long tradition of writers publishing stories in the shorter form, only to expand them at a later date. The most famous example of this is probably that of Raymond Chandler, who developed his early writing chops by publishing in the pages of the storied Black Mask, the same magazine which helped launch the career of Chandler's idol (and mine), Dashiell Hammett. Chandler later cobbled several of these stories into longer novels which became The Big Sleep and The Lady in the Lake. In 1929 Hammett himself wrote his first novel Red Harvest as a collection of  four related novellas ("The Cleansing of Poisonville," "Crime Wanted — Male or Female," "Dynamite," and "The 19th Murder") for initial serialization in Black Mask before appearing in book form later that same year.
So I resolved to try my hand at something similar: turning short stories into novellas. 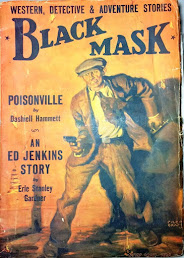 I've written in this space before about the process of expanding the first of these, the title story, into a longer work. I was (and am) quite pleased with the final result. And Down and Out publisher Eric Campbell liked it too, and agreed to publish it. He just wanted more word count in order to be able make the production costs balance out. So one novella became three.
Like Hammett I also initially intended to generate several related novellas which could be read together as a single long work. I talked about that idea here. However, I eventually abandoned the notion of expanding "Suicide Blonde"'s initial premise that far. I wanted to enhance the story, not pad it. And I was concerned padding it would be precisely what I'd have wound up doing.
And that's when I decided to give "Paper Son" and "Bragadin's Skin" the "Suicide Blonde" treatment. And a lot of writing and rewriting, sweating, proofing and swearing and starting over ensued. And now, lo these many months later, you see before you the cover art of the end result.
And I gotta say, as was the case with my other two recently published long-term crime fiction projects, it's really satisfying to finish something this long in the works. The sense of completion is hard to put into words, but tangible and no less enjoyable in spite of remaining hard to quantify.
I've got other irons in the fire: a really long-term project (a novel) I'm putting the finishing touches on; and a couple of short stories due soon to the editors who've asked for changes to them. Got a couple of other projects in the early drafting stages. And I'm going to get rolling on them pretty quickly.
But not before I take a little time and savor this achievement.
See you in two weeks!

Posted by DoolinDalton at 04:20