Evolution of a Story


by R.T. Lawton
Originally, I was going to title this one as "Three Strikes and a Home Run on a Bunt." But that is too long for a title, and as baseball fans know, technically a batter only gets three strikes and then he is out of the batter's box. He doesn't then get another chance to swing at the ball. So, pay attention here because this is the way this game went.

Strike One
Back in the 90's, another short story author proposed that he and I should write a private investigator story together, a story set in the corrupt river-town of Sioux City during the Prohibition Era. At the time, the proposing author had several more published short stories than I did, but he had also received several rejections from AHMM. So, our plan was to co-author the story and submit it to AHMM and he would then get a story into their magazine, well, at least half a story. Since he and I liked the same authors and the same type of stories, it should have been easy working together.
I wrote part of the story and passed it to him. He wrote the next part of the story and passed it back. And, so on until the story was finished. Were there any problems? Of course there were. We didn't agree on the title, the private eye's name or even his height, among some of the important issues. Consulting with other fellow writers as intermediaries resulted in evenly divided opinions or else a third suggestion which neither co-author wished to implement. In the end, there was a lot of coin flipping. I submitted the story with both author's names  for the byline to AHMM. They rejected it. The editor must've had her own coin. At separate times afterwards, my co-author submitted our manuscript to two small press magazines he had previously been published in. In turn, each magazine accepted the story, but then went toes up before a contract could be signed. The story never saw print. With all the fun I'd had on this joint project, I swore to myself to avoid any short story collaboration in the future. This worked for about twenty years.

Strike Two
Now, we move forward to the 21st Century. An author, whom I highly admire and was already in AHMM, inquired about the two of us co-authoring a short story for AHMM. I explained my prior situation and declined the proposal. A couple of years later, the inquiry came again. By the third request, I decided what the hell, give it a try, see how it goes. I then created a partial story outline proposal involving a bent cop and a gangster during the Prohibition Era, but a completely different plot than the story in Strike One. Next, I wrote about 1,000 words in the POV of one of the two main characters and passed the partial outline and story start to the other author for his turn to write about 1,000 words in the POV of the other main character. After the pass, other projects seemed to have come along and everybody went their separate writing ways. No harm, no foul.

Strike Three
A couple of years ago, I wrote a story about a gangster in 1930's New York City during (you guessed it) the Prohibition Era. Completely different plot than the ones in Strike One and Strike Two. I shipped the manuscript off to AHMM via e-mail in August 2017. The rejection came back in July 2018 with the editor's comments that it looked like I was setting the story up for a series. (Remember her comment for later.)  And, the editor was correct, I had intended for the story to become a series. 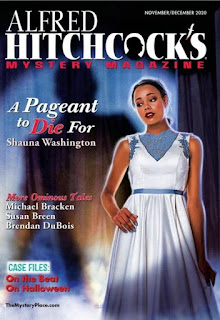 Looking through my story starts one day for something to write, I came across my old 1,000 word start from the abandoned Strike Two project. Years had passed without any progress, so I blew the dust off and continued the story. Only now, I changed the story to be written solely from one main character's POV, the bent cop. I finished the outline and the story as I wrote. The manuscript went to AHMM in February 2018 and was accepted in January 2019.

The Ball Keeps On Rolling
In the early part of August 2020, I got an e-mail from the Managing Editor of AHMM saying that I will have a story coming out in their Nov/Dec 2020 issue, but she had been on vacation and was trying to catch up, so she didn't yet know which story it would be. Since they had at the time six of my purchased-but-not-yet-published stories setting in inventory, I obviously didn't know which one it would be either.

The Home Run
In last August, Rob Lopresti e-mailed me with a link to the preview of the Nov/Dec 2020 AHMM issue. The last line in the 2nd paragraph in the Editor's Preview section says: "And R.T. Lawton introduces us to a new series in "A Matter of Values."
And yep, that's the bent cop and gangster story from Strike Two and The Bunt, but I wrote that one as a standalone story. Let's see now, one is a standalone, two is a sequel and at least three is a series, unless you count that as a trilogy, in which case it takes four. This means that in order not to disappoint the editor, I now have to come up with two or more new stories involving those same two main characters and then get contracts for each of those stories.. What a problem to have. Goes to show, you just never know how things will go in this game of ours.
Posted by R.T. Lawton at 02:01