Some Thoughts on Monuments

Art certainly doesn’t need to be pure. But public statues invite public admiration, and if we can no longer admire them, it’s right to wonder if they should remain.

And not in a good way.

More in this kind of way: 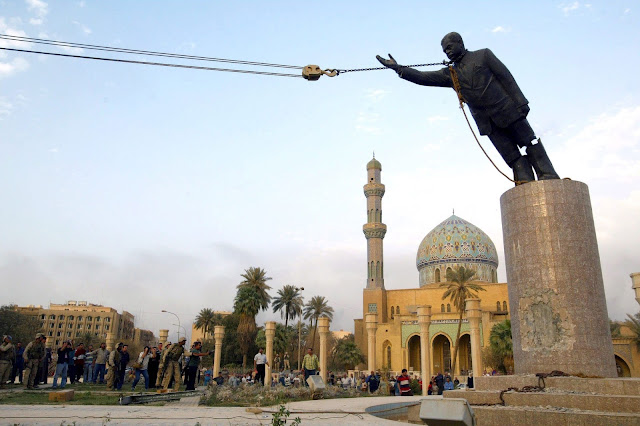 Yep, that's a pic of a statue of Iraqi "strongman" Saddam Hussein toppling, shortly after Hussein himself was toppled from power way back in 2003. But in reality it could have been any of hundreds of "great" men (and it's nearly always men, the likes of Evita Peron notwithstanding.) whose day of reckoning eventually came: Nicolae Ceaușescu of Romania, Tsar Nicholas II of Russia. Hitler. Mussolini. The list of the leaders of failed regimes, brought low by their own hubris and overreach.

And close on their heels: the monuments they erected, testaments of their enduring power. So many of the iconic moments surrounding the end of a regime involve the destruction of the talismanic physical testaments of that regime's power. It's a cycle as old as human history, and has been memorialized time and again by great artists, such as the English poet Percy Bysshe Shelley, in his immortal poem Ozymandias:

I met a traveller from an antique land,
Who said—“Two vast and trunkless legs of stone
Stand in the desert . . . Near them, on the sand,
Half sunk a shattered visage lies, whose frown,
And wrinkled lip, and sneer of cold command,
Tell that its sculptor well those passions read
Which yet survive, stamped on these lifeless things,
The hand that mocked them, and the heart that fed;
And on the pedestal, these words appear:
My name is Ozymandias, King of Kings;
Look on my Works, ye Mighty, and despair!
Nothing beside remains. Round the decay
Of that colossal Wreck, boundless and bare
The lone and level sands stretch far away.


The point, of course, being, that all such sacrifices on the altar of human vanity are doomed to eventually come crashing down.
Of course it goes without saying that where there's a rule, there's an exception. And not surprisingly, with the way Americans tend to view themselves as an exceptional people, the exception I'm thinking of to this particular rule is definitely an American one.

So let's talk about all of these Confederate monuments arrayed throughout (but not limited to) the American South. You know, the ones we've seen recently being pulled from their pediments by protesters, when they're not being removed by public workers at the order of local municipalities or state governments.

The ones that were mass-produced for profit not in the South, but in New England. Heads special ordered and matched to a previously cast body, either standing, or mounted on horseback. Losers of a brutal war which left over half-a-million Americans dead, memorialized over a thirty year period, beginning a generation after the end of that war. And all as part of a largely successful, long-running attempt to stave off many of the long-term impacts of that war: a movement romanticized as preserving the memory of a glorious "Lost Cause."

Whoever said, "The winners write the history,"never read anything by the likes of two-time Pulitzer Prize winning Historian Douglas Southall Freeman. The defeated secessionists of the American South might have lost the war, but for over a century afterward, they and their spiritual descendants worked diligently at winning the peace. And they got terrific press for it.

Think Gone With The Wind, or Hollywood heartthrob Errol Flynn playing future Confederate cavalry leader J.E.B. Stuart, in the top-grossing 1940 western, Santa Fe Trail. Or go back further, to (Southerner) D.W. Griffith's ground-breaking 1915 film, The Birth of a Nation, the first film shown in the White House for President Woodrow Wilson: Southern-born and raised, progressive in most things save race relations, single-handedly responsible for reversing the racial integration of the federal bureaucracy which had been carried out by his predecessors.

The film was truly innovative in its approach (first use of close-ups, a musical soundtrack, and "a cast of thousands") and utterly antediluvian in its subject matter. Based on a novel called The Clansman: a Historical Romance of the Ku Klux Klan (And you can guess how the Klan comes across in that one.) by a former Baptist minister and life-long bigot named Thomas Dixon, Jr., the film paints the Klan as the Good Guys, preserving the virtue of their swooning (and utterly helpless) women by wresting them from the clutches of a number of ridiculously drawn racial stereotypes of underintelligent, overly sexual blacks played by white actors in black face.

So, you know. Pretty much an early example of spin-doctoring, in service of white-washing (pun very much intended) the despicable practice of lynching.

This is the background against which the statues currently being pulled down or placed in storage across this country were financed, constructed, shipped, mounted, raised and dedicated. Art as propaganda, in service of a monstrous composite lie: the notion that the Civil War wasn't fought over slavery (it was), that the South didn't really lose (it did), and that society did not need to change in order to reflect the status of newly-freed former slaves.

As a nation we are still wrestling with that last part. And the conversations being sparked by the current round of protests are long overdue. Either we as a people will address the wounds inflicted by the vile practice of slavery and the on-going systemic oppression which sprung up in its wake, or we may well find ourselves in the same position as the great and powerful Ozymandias.

Posted by DoolinDalton at 05:04