Proofreading during a pandemic

The first paid editorial job I ever had was working as a proofreader. I was in my senior year of high school and saw an ad in one of our local weekly newspapers that the newspaper itself needed a part-time proofreader. I was managing editor of my high school newspaper, and I was beyond excited at the idea of working for an actual non-school newspaper. I called, went in for an interview that day, and was offered the job—two days a week after school and into the evening. I was so excited that I accepted on the spot. Only as I was walking out of the managing editor's office did she call after me and say, "Don't you want to know that the pay is?" Oops. The pay was $5 per hour, which I said was great. So much for negotiating. But little did she know, I was so excited, I would have done it for free.

After I went to college, I occasionally was hired for random proofreading jobs. A friend was having a book published with a small press, and I proofread it. When I was in law school, I proofread a new edition of a textbook about white-collar criminal law for the professor who wrote it. These days, I occasionally am hired to proofread novels. Of course I also proofread my own stories before I submit them and, depending on the publication, before they're published. And I proofread anthologies I edit or co-edit, though I always like to have the authors proofread their own stories too, and I rely on any proofreader the publisher provides too. It's always good to have more than one set of eyes.

I've almost always proofread on paper. I think I read more carefully on paper than on the screen. I'm not sure why that is. There probably is research on this very topic, as I'm sure I'm not the only person like this. But I don't need to know why. I just need to know that it's true, and it is true. I know that for certain because tonight I ran a little test to be sure.

I've been offered a new proofreading job. I'd rather not go to the post office during the pandemic, so I was wondering if I could proofread this book on my computer instead of on paper. So I ran the aforementioned test. A friend sent a short story to me in which she introduced a few errors, and I read it on my computer, marked the errors in track changes, and returned the story to her. 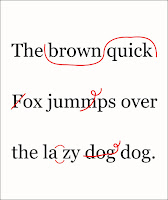 Did I catch all the errors? Nope. While I caught some she hadn't known were in there (yay!), I missed two of the ones she introduced. Two mistakes in seven pages is not a good rate. So it's back to proofreading on paper for me, and I'll have to risk going to the post office. (And yes, maybe I wouldn't have caught the errors on paper either, but my track record suggests otherwise.)

One technique proofreaders use to do their work well is to read backward, word by word, so you focus on the words, not the story. (If you get caught up in the story, you might miss errors.) That works for catching actual typos. Most of them anyway—but reading backward doesn't enable you to catch if a typo results in a real word. Sure, you can spot that this wordd is wrong reading backward. But you can't tell that this bird is wrong, as you would need the context of the sentence for that. Reading backward also doesn't enable you to spot if there are missing words in a sentence, although you probably could catch if if the same word appeared twice. (Did you just catch that?)

So I don't read backward when I proofread. And I have to guard against getting caught up in the story that I miss things, so I do different things to stay focused. Often I'll keep a sheet of paper on the page, covering up everything below the line I'm reading, and that seems to help. Sometimes I'll read out loud. When I proofread the criminal law textbook, I found myself reading it out loud in a southern accent. It forced me to read more slowly, enabling me to focus more. It's strange the tricks a person will come up with to get the job done right.

So, authors, do you proofread your works on paper? Or on the screen? Do you have any techniques you use to do a good job? Inquiring minds want to know.