Outside the Three-Mile Limit


by Paul D. Marks
As many regular readers here know, I’m fascinated with Los Angeles history. I post about various aspects of it from time to time. I use it as background in much of my fiction. And one of the most fascinating aspects of L.A. history are the gambling boats that used to anchor off the shore, just outside the three mile legal limit.

Bobby in the just-released (yesterday) The Blues Don’t Care has more than his share of adventure on one of those gambling ships. In the novel, Bobby and the band he’s in get a gig on the Apollo, one of the gambling ships off the Los Angeles coast. They find more than a little trouble there that really sets the plot in motion.

The Apollo is based on the real gambling ships that used to lay off the SoCal shore, just outside the three-mile limit. I’ve taken a few liberties with the Apollo. It’s much nicer than the real gambling ships, which, while they had their amenities, weren’t always as glamorous as you might think. But when gambling was illegal I guess they were good places to go and get your fix.

The most famous of the real gambling ships was the Rex, run by Tony Cornero, A.K.A. The Admiral. Cornero had a checkered career, to say the least. During Prohibition in the 1920s he was a rum-runner (I wonder if he knew Joseph P. Kennedy Sr.?). He moved much of his illegal booze on ships, so had a background on the bounding seas for when he decided to open up the gambling ships later on. 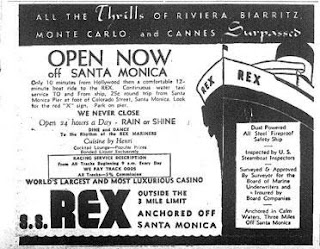 When Prohibition was repealed, Cornero made the easy slide over to gambling. In 1931 when gambling was legalized in Las Vegas, he and his brothers set up there, opening up The Meadows Casino and Hotel, beating out Bugsy Siegel’s Vegas venture by over a decade. Unfortunately, Lucky Luciano got wind of it and, since Cornero wouldn’t pay extortion money, the Meadows was torched. Hmm, no connection to old Lucky there, right?

So back to L.A. Cornero went. And in 1938 he bought two ships, the SS Rex and the SS Tango and converted them into gambling boats. By running them outside the legal limit he could skirt US law. The ships included gourmet chefs, gunmen to keep the peace, waiters, waitresses and—wait for it—orchestras. And that’s where Bobby and the Booker ‘Boom-Boom’ Taylor Orchestra come in. 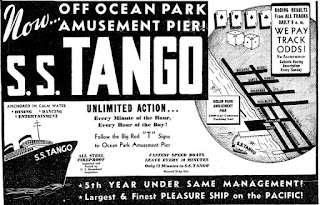 Cornero was a constant thorn in the side of authorities, but things went along swimmingly until The Battle of Santa Monica Bay—yeah, that’s a real thing. The authorities tried raiding the ships. The Rex held them off for nine days, but eventually lost and Cornero, to make a long story short, hightailed it back to Vegas, where he built the Stardust Casino and Hotel, which I stayed at many times. At the time, way back when, I knew it was mob-connected, but I didn’t know then about the Cornero connection, which I find intriguing.

And, of course, some pivotal scenes in The Blues Don’t Care are set on the Apollo, just a water taxi ride from the Santa Monica Pier:

“A fine briny mist bit Bobby’s skin as he waited in the throng of people on the Santa Monica Pier for the water taxi that would take him to the gambling ship Apollo. The little cartoon-like ‘Kilroy Was Here’ drawing glared at him from the water taxi shack. Kilroy was everywhere these days. He had to shield his eyes from the fiery late afternoon sun, wished he had a pair of sunglasses. Only movie stars and musicians wore sunglasses. Maybe he’d get a pair of shades.”

Below, Bobby describes seeing the Apollo’s ballroom for the first time:

“Bobby peered over the sea of faces in the ballroom—white faces in expensive suits and chic dresses. The Apollo wasn’t the biggest or fanciest or the most seaworthy ship in the world. But if she went down, half of Hollywood, the Los Angeles political establishment, and business movers and shakers in the Southland would disappear into Davy Jones’ Locker. That didn’t stop the people who ran her—gangsters everyone knew—from decking out the main ballroom as if it were Versailles. The ceiling was tall and sparkled with lights under a false ceiling with a gauzy, azure-painted sky. Below it, the dance floor in the center of the room, surrounded by gambling tables—craps, roulette, blackjack, and the like. And in rows behind the gambling tables, dining tables.”

Raymond Chandler talks about them in Farewell, My Lovely. In the novel, Philip Marlowe is told that Moose Malloy might be hiding out on one of the gambling ships outside the three mile limit. Marlowe sneaks aboard and persuades Brunette, the gangster who runs the ship, to get a message to Malloy. Farewell, My Lovely was made into the movie Murder, My Sweet (1944). The 1942 B movie The Falcon Takes Over is also based on the plot. And in 1975 Robert Mitchum starred in a remake.

And much of Song of the Thin Man, the last Thin Man movie (co-written by my friend Nat Perrin) is partially set on one of the ships. A benefit is happening on the gambling ship Fortune. The bandleader is murdered. Guess who has to figure it out. Song of the Thin Man should be called Farewell, My Thin Man as it’s the last in the series and unfortunately not the best by far, but it has its moments.

Another movie that takes place on a gambling ship is the Cary Grant-Larraine Day flick Mr. Lucky. Not his best, but I like it. And you can check out my close encounter of the first kind with Cary Grant at my website.
The book was released yesterday. Hope you’ll want to check it out. Here’s what some people are saying about it:

“Paul D. Marks finds new gold in 40's L.A. noir while exploring prejudices in race, culture, and sexual identity. There's sex, drugs, and jazz and an always surprising hero who navigates the worlds of gambling, music, war profiteers, Jewish mobsters, and a lonely few trying to do the right thing. Marks has an eye for the telling detail, and an ear that captures the music in the dialogue of the times. He is one helluva writer.”
—Michael Sears, award-winning author of Tower of Babel, and the Jason Stafford series

"While The Blues Don't Care is a complex, sometimes brutal, story, it also has its glimmers of beauty and joy. Those glimpses come from Bobby's passion for music, and his awe when he sees celebrities such as Clark Gable and Billie Holiday. Wander into Bobby Saxon's world in Paul D. Marks' latest book. It's a world you won't easily forget."
—Lesa's Book Critiques, lesasbookcritiques.blogspot.com 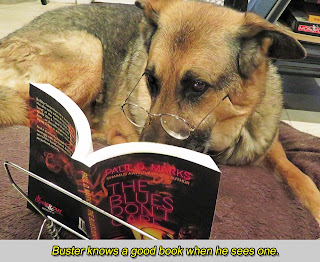