by Steve Liskow
That's the anthology coming out June 18 with one of my stories in it. John Floyd has one in it, too, along with several other people I know. Kate Flora, who founded Level Best Books, accepted my first short story for publication fifteen years ago. K.M. Rockwood suggested the name of a band that appears in one of my novels. Crime writing is a small world.

The back cover copy gives you a good sense of what's in store: 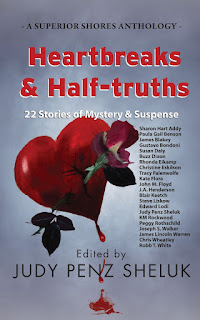 Lovers and losers. Whether it's 1950s Hollywood, a scientific experiment, or a yard sale in suburbia, the twenty-two authors represented in this collection of mystery and suspense interpret the overarching theme of "heartbreaks and half-truths" in their own inimitable style, where only one thing is certain: Behind every broken heart lies a half-truth. And behind every half-truth lies a secret.

According to my spreadsheet, "Ugly Fat" received fourteen rejections between the end of 2008 and early this year when Judy Penz Sheluk selected it for the anthology. One market told me to re-submit it--and rejected it again. That did wonders for my self-esteem. I assume another market rejected it because I sent it in April 2018 and haven't heard from them yet. That's not unusual, though. I still have seventeen unanswered queries from agents to whom I sent The Whammer Jammers in 2011. That's a major reason I started self-publishing my novels.

I've always loved short stories but never felt comfortable with the form until I attended the Wesleyan Writer's Conference in summer of 2004. Alex Chee, Roxanna Robinson and Chris Offutt were all excellent teachers. Chris also gave me helpful feedback on an early version of what eventually became Blood on the Tracks (Interestingly enough, so did Kate Flora at Crime Bake a year or two later, on a very different draft). I wrote eight or ten short stories in the months after that one-week workshop, and four stories that have seen print came from writing prompts or other suggestions I picked up there.

"Ugly Fat" is different from many of my stories, but similar to a lot of them, too.

Like many of my stories, it has a female protagonist. I worked theater with strong, organized, creative stage managers for thirty years, and most of them were women. My wife is smarter than I am, too (Yes, I grant you, that's no big deal). My novels feature strong women like Valerie Karr, Megan Traine, "Shoobie" Dube, and Svetlana Melanova. Weak or dumb women don't do it for me, and that bias shows up in my writing. 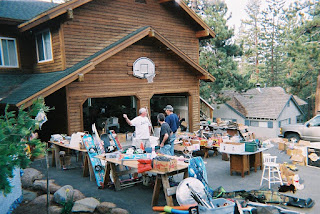 Connie, the protagonist in "Ugly Fat," has been dumped by her cop boyfriend and is now visiting the gym to get back in fighting trim. She stops at a tag sale and finds that her problems are nothing compared to the woman running the sale. Molly's husband dumped her for his secretary and they eloped to Mexico. Now Molly is selling all the guy's clothes, books, and sports gear. She divorced his sorry ass and refers to it as a great diet, in which she lost 170 pounds of ugly fat in one day. Connie sympathizes, but figures out there's more to the story than meets the eye.

The story has dark humor, which I like, and a few music references, also a staple. Telling more would spoil it.

Now, you ask, how is it different from my other stories?

If you don't ask that, you missed your cue.

Well, it's only 2400 words long, one of my shortest published stories. My comfort zone seems to be about 3500--or, if you include my two novellas--about 4300. Excluding the novellas, my two longest stories are roughly 6000 words.

I've always been a process kind of guy, maybe because I taught for so long. More often than not, I know when, where, why, and how I got the idea for a story. I've discussed that before. I try to help people in my workshops realize that ideas come from anywhere and everywhere, sometimes several places and ideas at once.

I remember nothing about when or where this story came to me. The draft I sent for the anthology is "Version S," which would be the 19th version. That's far more than usual, and I don't know why there were so many. I usually do five or six drafts over a span of three or four months. Since I sent the story out the first time around Thanksgiving 2008, I probably wrote the first draft in July, most likely after seeing a tag sale or ten within walking distance of my condo any given weekend.

Who knows? Who cares?

Connie's found a home. And she's in good company.