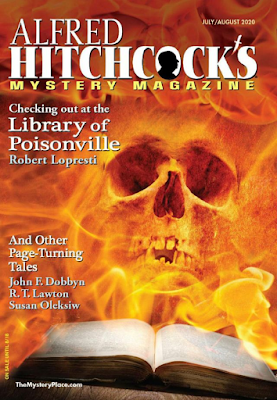 The July/August issue of Alfred Hitchcock Mystery Magazine hit the newsstands yesterday (are there still newsstands?) and I am delighted to report that I have a story  in it.  (After I typed that I saw the cover.  Wow!  AHMM has really been on a roll the last few years with great covers.  I am proud to benefit from that again.)

"The Library of Poisonville" is full of literary references, appropriately enough.  The title refers to Jorge Luis Borges' great story "The Library of Babel," which inspired my piece, and also to a work by Dashiell Hammett.  Most of the references are obvious, but I thought I would write about an author who my story only touches on tangentially.

John Collier was born in London in 1901.  He was reading Hans Christian Andersen by age 3.  As a teenager he told his father he wanted to be a poet.  Believe it or not, that was fine with dear old Dad, who never required him to get a job or even go to university.  (His work contains several  odd father-son relationships.)

By age thirty he had switched his emphasis to fiction which gave him the chance to show off his, um, unique imagination.  (In what way unique?  Well, his first novel was entitled His Monkey Wife, or Married to a Chimp.)  His story collection Fancies and Goodnights won both the Edgar Award and the International Fantasy Award.    And how often has one book scored both of those?

My favorite Collier story - which I list among my all-time favorite fifty crime tales - is "Witch's Money." In spite of the title this is no fantasy, but rather a tale of cross-cultural misunderstanding in which the arrival of an American painter in a village in southern France leads, with the inevitability of Greek tragedy, to utter destruction. 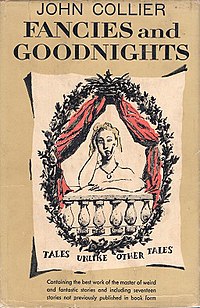 His writing style tended toward the flowery and sardonic, reminding me of Saki, Roald Dahl, Avram Davidson, and James Powell.  His work has been adapted for Alfred Hitchcock Presents, The Twilight Zone, and Tales of the Unexpected.  He also wrote screenplays for the Hitchcock show and movies; most importantly he was part of the team the wrote The African Queen.

Of all of his works the one that has been adapted for other media the most is probably "Evening Primrose," about a poet who rejects society by living what might be the ultimate consumer dream: dwelling secretly in a department store.  It was even turned into a TV musical starring Anthony Perkins, with songs by Stephen Sondheim!

"I sometimes marvel," Collier once wrote, "that a third-rate writer like me has been able to pass himself off as a second-rate writer."

Here are some of my favorite lines from this first-rate writer:

"Alice and Irwin were as simple and as happy as any young couple in a family-style motion picture.  In fact, they were even happier, for people were not looking at them all the time and their joys were not restricted by the censorship code." - Over Insurance

"How happy I might be if only she was less greedy, better tempered, not so addicted to raking up old grudges, more affectionate, with slightly yellower hair, slimmer, and about twenty years younger!  But what is the good of expecting such a woman to reform?" - Three Bears Cottage

Actress and screenwriter: "I think I'd like to play Juliet."
"It's been done."
"Not as I shall do it.  You shall write a new script, especially for me." - Pictures in the Fire

"So Mrs. Beaseley went resentfully along, prepared to endure Hell herself if she could deprive her husband of a little of his Heaven." - Incident on a Lake

"Annoyed with the world, I took a large studio in Hampstead.  Here I resolved to live in utter aloofness, until the world should approach me on its knees, whining it apologies." -Night! Youth! Paris! And the Moon!

"As soon as Einstein declared that space was finite, the price of building sites, both in Heaven and Hell, soared outrageously." -Hell Hath No Fury 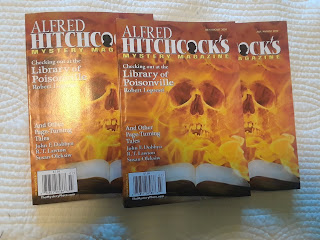 "The young man was greatly taken aback to hear a gorilla speak.  However, common sense reminded him that he was in a city in which many creatures enjoyed that faculty, whom, at first sight, or at any hearing, one would hardly credit with sufficient intelligence to have attained it." -Variation on a  Theme

"It is the fate of those who kiss sleeping beauties to be awakened themselves."  -Sleeping Beauty

"The first cognac is utilitarian merely.  It is like a beautiful woman who has, however, devoted herself entirely to doing good, to nursing, for example.  Nothing is more admirable, but one would like to meet her sister." - Old Acquaintance

If you have read this far I have an offer for you.  As I said, my reference to Collier's work in "The Library of Poisonville" is obscure, but it should ring clear to any fan of the man.   If someone can tell me which of his stories I referred to - and where - I will send that person an autographed copy of the magazine or something of equally dubious merit.  First responder only!