Here's a binge candidate I wasn't sure about, but after watching the pilot season, a couple of which I missed the first time around, I'm down with it. Miami Vice.

The show went on the air in 1984, but it didn't crack the Nielsen top thirty until the second season, which was arguably its most influential. After that, NBC began to screw around with its scheduling, and audience numbers fell off. The fifth-season finale drew 22 million viewers.

Watching it thirty-five years later is somewhat of a mixed bag. Certain aspects date badly. Not so much the fashions, as in the clothes, but the fashion of narrative tropes. (There is the matter of Marty Castillo - Edward James Olmos - wearing ties that are less than an inch wide, but that's very much in character.) More problematic is the predictability, that morally compromised good guys are unlikely to survive an episode, for example, or that any fleeting romantic interest is clearly doomed. And why are Trudy and Gina always going undercover as hookers, not even once in a while as, say, lawyers?

On the other hand, once you re-acclimate to the rhythm and conventions of the series, you find yourself moving to some familiar dance steps. You forget that the color palette was a real departure, back then, the sun-bleached stuccoes and desaturated pastels during daylight, and the heavy, deep, silken darkness of night, streetlights a hot, retinal glare. The look is a character. That, and of course the soundtrack. A little Phil Collins goes a long way, but the use of music bridges as structural was transformative.

Granted, you're shooting as many as two dozen episodes a season, they're gonna be uneven. Some of them are, to be generous, no better than pot-boilers. And then, just when your patience is running low, they serve up an episode like "The Maze" (S1, Ep18), which demonstrates how strong the show can be, without its aggravations. The other thing this particular episode points up is that Philip Michael Thomas, who I always thought was the weakest link, is a lot better than you remember, or gave him credit for. "Evan" (S1, Ep22), also from the first season, has a showcase of a scene - as written and acted - between Tubbs and Crockett, that allows Don Johnson to take all the air out of the room with unexpected discipline: the guy's got serious chops.

The idea that Miami Vice was a game-changer is part of its mystique, and it was used to promote it at the time. Was it all that different? If you compare it to Hawaii Five-O or Mannix, or even Hill Street Blues, you'd have to say yes, because Miami Vice used a less linear narrative. It also moved the goalposts for Standards and Practices, for content, and what followed. It's hard to imagine Wiseguy getting past the network censors, if Miami Vice hadn't come first.

I don't want to stake too broad a claim. American commercial broadcast television has never been known for daring, and cable has changed the environment entirely. Not necessarily for the better. The primary instinct for the lowest common denominator, for audience share, is still dominant. But in a landscape that was often vapid and inauthentic, not to mention technically primitive (stuck following the restrictions of a three-camera set-up, like the soaps, establishing shot, close-up, reverse), the surface tension, the urgency, the angles and the edits, the information overload, gave the show an invigorating edge.

In retrospect, it's probably fair to say that we get the TV we deserve. There was in fact a Golden Age, with scripts by Rod Serling and Paddy Chayevsky, directors like John Frankenheimer and Arthur Penn, and a huge stable of actors. But let's be honest, plenty of that live drama was crap. There was at the time, though, a kind of free-for-all, an open market for programing. Locals were by and large network affiliates, and they had to provide a lot of their own content.  Then the marketing challenge changed, and the Big Three dominated, and predictability and stagnation set in. I'd guess it lasted from the late 1950's to the middle of the 1970's, but that's also when PBS got legs. As the market fragmented, with UHF and then cable, the audience became more directly engaged. When there was no selection, and only three choices, ratings depended on audience fatigue, or indifference. The yardstick for the broadcast was least offensive - you didn't have to like what you were watching, but you liked whatever else was on less. It made for homogenized material. As a sort of object lesson, a show like Miami Vice could be seen as emblematic. It came along when we needed it. 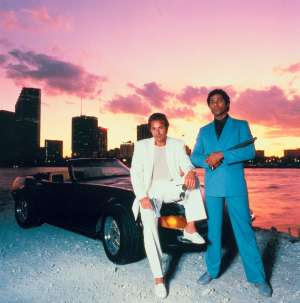 I do not remember much about most of the show. But I do remember that Leonard Cohen appeared in one episode as a major, very mysterious crime boss. A minute of his voice, a shadowy presence--I still remember that. The man was magnetic.

A great analysis of a unique show. I remember it well.

I remember the show very well - and enjoyed it, despite the fact that it was a lot like "Friends": everyone's driving, living, dressing, drinking, etc. seriously above their weight.
(And the women, as you pointed out, always had to play hookers or were hookers and even if they weren't, if they were a love interest, they got killed, often horribly.) I think one of the main reasons I enjoyed it was that it had an energy to it, and also a light - those pastel colors, that sunshine on the water - that was unique.

David, I did a few months in Miami working with Customs riding the go-fast boats off the Miami coast at night during the summer of 1980, roughly the same time depicted in the TV series. Smugglers were racing in from the Bahama Banks under cover of darkness, mother ships coming up from Colombia, the Coacaine Cowboys dropping loads in the swamps from low flying aircraft, pot dealers taking paper grocery sacks of cash to the banks, the Marielitos in Immigration camps under the Interstate, high rise buildings being built on dope money, corruption everywhere, gunfire and bodies. By the time the Miami Vice series came out in '84, it was like old home week.

The series also had great music. I've got the album in vinyl.

Your article was a trip down memory lane.

The irony is; the network had been doing so poorly that our affiliate here in Wichita, Kansas didn't show the first couple of episodes; they ran a movie! And Vice became a smash hit! AND Don Johnson had gone to high school here!

I overlapped working in South Beach at the time (not with RT), living behind the pink hotel that often showed in scenes. My opinion leans more toward style than substance, although it was decidedly a pretty show. The music was great, Godley and Creme, Talk Talk, Jan Hammer, and The Who, for example.

I mainly recall interminable scenes of angst and poignancy where Crockett stares into the sunset after having yet another one-night-stand who might have become 'the one' killed off, just like the one a week earlier, and the week before that.

A couple of notes:

• You might remember a season transition where someone launches a rocket at Crockett's car, blowing it to pieces. It was, if I remember correctly, a Ferrari clone and Ferrari hadn't been chuffed that Johnson was driving around a replicar. Negotiations ended with a win-win with Ferrari providing a car and the show getting rid of the old one… spectacularly.

• Johnny Carson interviewed Philip Michael Thomas on the Tonight Show, and it was unsettling. Carson clearly did not like the actor and he didn't bother to mask his feelings. I'd never seen Carson like that before, not could I detect anything off-putting about Thomas. Very strange. I wondered if that derailed Thomas' career.

MTV Cops. Saw an interview with the Director of the MIAMI VICE Pilot. Many have talked about how stylized the show was. Wardrobe, backgrounds, neon, etc. Nothing was accidental. Even the color of the wall characters walked past was planned. The iconic shot at the end of the episode with the black Ferrari at night the director said he'd heard Phil Collins "In the Air Tonight", was haunted by it. Shot with no dialogue. The phone booth & the CAFE sign didn't exist. They just stuck them in the shot. Emotions. Grabbed you by the gut, that show. Rockers cast in many episodes (Gene Simmons from KISS, Framk Zappa, Phil Collins, James Brown, etc.) Soundtrack of the 80’s (Phil Collins, U2, Peter Gabriel, The Damned). Powerful performances (Bruce Willis playing an arms dealer - that gets blown away as the freeze-frame final shot by his abused wife, with Crockett yelling, "NO !!!" as we hear the gunshot). I grew up in the 80's. Scarface was the peak in the Movie Theatre. MIAMI VICE was the peak on television at the time. Everybody wanted to be on it. Don Johnson & Phillip Michael Thomas were like rock stars everywhere they went. I myself dressed like Don Johnson in high school. I mean from the get go when the show 1st aired. White cotton dress jacket, grey dress slacks, black t-shirt, loafers (no socks), no belt, tortoiseshell Ray-ban sunglasses. No earth tones! Even had a classmate yell "Crockett" at me passing through the halls. I remember walking a mile to school in the snow wearing socks & loafers, taking the socks off & throwing them in my locker. Having to put on those soaking wet (freezing cold) socks to walk back home in the Winter was no fun. Stupidity of youth. :)