MGM: More Stars Than There Are in Heaven – Part II


by Paul D. Marks
We're back for Part II of my interview with Steven Bingen, co-author with Stephen Sylvester and Michael Troyan of MGM: HOLLYWOOD'S GREATEST BACKLOT.  If you missed Part I you can find it here: https://www.sleuthsayers.org/2020/01/mgm-more-stars-than-there-are-in-heaven.html .


Paul: Welcome back, Steve. What are your and your co-authors backgrounds?  Tell us a little about your personal as well as Hollywood backgrounds.

Steve: There are 3 credited author's on this book, "MGM: Hollywood's Greatest Backlot."

Years ago our agent was told by a publisher that there could never be a "unified vision" on a book with 3 perspectives.  That publisher didn't understand that we all felt exactly the same way about Hollywood's backlots and shared exactly the same odd obsessions.  Whatever the book's virtues and flaws, I defy anyone to figure out where one of our voices stops and another's starts.  Our collaborating was just like the production of most Hollywood movies.  The book's very existence is a sort of 2-Dimensional denial of the auteur theory.   Creativity by committee, if you will.

Mike (Troyan) and I both came out of Warner Bros. Corporate Archive – although his background is more academic than mine.  I have a background rooted in film production while his is more literary.  Mike is the author of "A Rose for Mrs. Miniver," about MGM star Greer Garson – which I can't recommend highly enough, by the way.

Steve (Sylvester), my other partner is in possession of vast amount knowledge and a vast collection of materials relating to MGM as a physical place.  He's the only one of us who was actually able to boast of visiting the MGM backlot before it was all destroyed.  In some ways, in visiting the studio he was able to do what I've aspired to do for my whole life. Because I was too late to see the place, the studio always seemed almost mythical, like Shangri-La or Camelot to me.  But it was real and Steve was there.  I wanted that perspective in the book.  It just seemed like a good fit for the three of us to coauthor – and it was.

Who have you contacted (MGM old-timers, etc.) and have they been willing to help?


I don't know if it was a conscious decision, but we tended to avoid talking to movie stars because their stories have been told so often, and because their worlds at the studio were so insulated.  Elizabeth Taylor was at MGM for decades, but her experience on the backlot would have consisted of being driven through the sets in a limo to her particular location.  I doubt if she would have had much opportunity or interest in exploring a place which wouldn't have seemed at all unusual to her because of the odd circumstances of her life.  It would be like asking a coal miner what was extraordinary about a mine shaft!

On the other hand we spoke to a lot of "regular people," some of whom worked on the lot for their entire careers who had amazing stories to tell, and who realized, even at the time what a bizarre and wonderful place MGM really was.  Some of our best stories were from people who grew up near the studio who used to climb the fences and explore inside as children.  I really do envy those people.

How many backlots were there?  Where?  What did they have on them?

MGM wasn't a single lot. Lot One contained the soundstages, corporate offices and post production facilities.  The backlot was literally at the rear, or back, of the plant.  As the studio grew it expanded across the street onto a property known as Lot Two.  Lot Two contained a small-town street, residential districts, railroad stations (with working trains) – the largest of which replicated New York's Grand Central Station.  It also had European and Asian villages, a jungle with a bridge, man-made lake, gardens, pools, castles, Southern and English estates, and a half dozen blocks, built full scale, replicating New York City and all its Burroughs – right down to the last street sign, man-hole cover, and fire escape.

Lot Three was itself surrounded by the satellite lots; Four, Five, Six and Seven – which collectively housed zoos and stables, more sets, storage sheds, partial fleets of aircraft and locomotives, a peat farm….   whatever there wasn't  room for anywhere else.  When L. B. Mayer, the boss, took an interest in horse racing in the 40's, people used to suggest that the Santa Anita racetrack should perhaps be rechristened  Lot Eight! 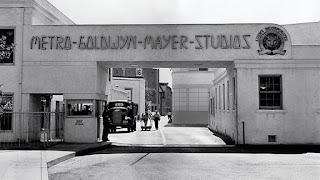 What are your philosophical thoughts about the loss of the backlots?

I've always been haunted by and interested in Hollywood's backlots in general.  The idea that there exists places in the world where there are entire phantom towns constructed to mimic the real world – and yet where no one has ever lived, could ever live, is fascinating and mysterious and a little creepy.  Backlots are supposed to duplicate our lives, our homes, and the city streets we move thorough every day, and yet although they can be as familiar to us as places we've lived in our actual lives, they remain unknowable, untouchable, just out of normalcy and of recognition.

Backlots are like the purest form of architecture.  They really are designed just for aesthetic reasons.  The backlot architect doesn't have to worry about service elevators or building codes or faulty wiring.  A backlot just has to look good and to set a mood in order to do its job.  There are no real world considerations involved. Find an architect and ask him where else in the world that happens?

During the writing of this book it occurred to me that Hollywood's backlots are responsible for an awful lot of the defining non-movie architecture of the last century as well.  Think about it.  If Hollywood hadn't started designing sets to suggest moods or foreign settings would we really have shopping malls, or theme parks, or places like Las Vegas today?  All of these places, for good or bad, came out of backlots and the people who designed them. 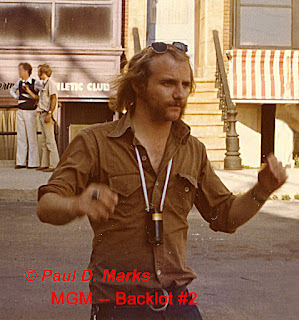 I used to give tours of Warner Bros. Studio in my capacity as historian for the company.  Once I was showing the family of some executives an artificial lake out on the backlot and describing how that lake had been dressed as India for a film which I'd seen shot there.  I was going on about how the set had looked exactly like the real India when all of a sudden it occurred to me, and I told my bemused guests this, that I'd never personally been to India at all.  That my entire idea of what India is, in fact came not from the real thing, not from India at all, but rather from movies, some of which had undoubtedly been made right where we were standing right at that moment!

You should talk to my wife, she grew up in India for a time – but yes, she does have an American birth certificate....  But changing elephants in midstream now, What is your next project?

I can't speak for my partners…but…I will.  Honestly, I'm not sure if I'll ever be able to shake off the current project!  After all, I'm doomed to see the MGM backlot every time I sit back to relax and turn on the TV!

We'd love to make this book the first volume in a series about all 7 of Hollywood's major studio lots – the Seven Sisters.  I'm just not sure if logistically, and legally it's going to be possible to do so.  To look at it from the viewpoint of the other studios I can't really blame them for not wanting someone from the outside to come around and start rooting around in their past.  We were able to "do" MGM because so many different hands have been running the company and the people who owned the copyright on the materials we needed weren't the original owners. But I don't know if that set of circumstances could come up again in regards to another studio.  We'll see…

Thank you, Steve, for joining me here at SleuthSayers.  And good luck with the book. "MGM: Hollywood's Greatest Backlot" is available in bookstores and at Amazon.  Click here: 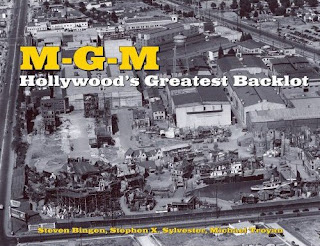 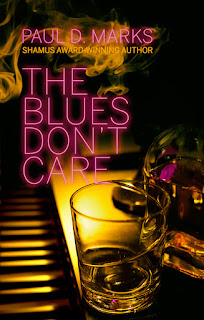