Once Upon a Time


by David Edgerley Gates
This is a quixotic sorta thing, but Once Upon a Time in Hollywood got me thinking about Who It Might Really Be. Granted, it's a counter-factual narrative, and part of its weirdness is how and where the real world overlaps the fantasy. Sharon going into the matinee and watching herself in The Wrecking Crew is an enormously charming conceit. Her murderers going to the wrong house and finding Brad Pitt stoned out of his mind is a lot more disturbing, because in real life the Manson crew did actually go to the wrong house, and Terry Melcher wasn't home.

Anyway, some of you might have noticed that Edd Byrnes died last week. He was obviously most famous for 77 Sunset Strip and Kookie. He was also from a generation of actors who caught the last gasp of the studio system. He was under contract to Warners, along with Ty Hardin, and Peter Brown, and Troy Donahue. Doug McClure signed with Universal, as did James Farentino and Guy Stockwell. They did a lot of series TV with their respective stablemates, for their specific studios, and they got feature work, but again, they were locked into longtime studio commitments. 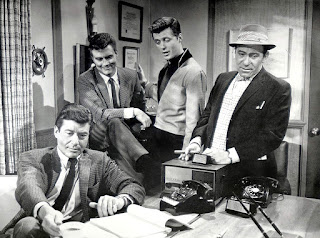 The part that Leo gets in the pilot for Lancer was in fact played by Joe Don Baker, who was in his mid-thirties at the time. Jim Stacy and Wayne Maunder, series regulars, were in that same age band. It's one of those simply odd things, that one of these guys breaks out. Steve McQueen, for instance, after Wanted: Dead or Alive, the model for Rick Dalton's show. Burt Reynolds and Clint Eastwood came out of the same Petri dish, but bear in mind that for every one of them there was a Vince Edwards or a George Maharis. 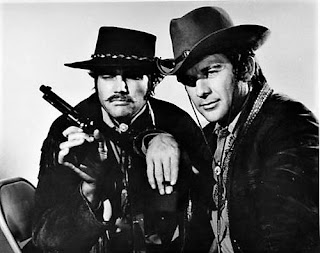 Of this group of actors, what you might call male ingenues - like Robert Wagner or Jeffrey Hunter a couple of years earlier - I've always thought Guy Stockwell was the most poignant. He got some really good breaks. So did Doug McClure, for that matter, but Guy was an actor with more range. (They worked together twice, in Beau Geste and The King's Pirate, both of them dogs.) Brad Pitt has himself remarked that there are a lot of pretty boys out there, and a lot of pretty boys who can act, but it's still purely a crap shoot. Guy did a bunch of guest shots, and then he was signed for Adventures in Paradise. A year after that, he joined Richard Boone's repertory company for Boone's anthology show, which unhappily only ran one season. Then we get The War Lord, with Boone and Chuck Heston (and James Farentino), Blindfold and Tobruk,  with Rock Hudson, and Banning, with Wagner, and Farentino again, and Gene Hackman - right before Buck Barrow. Not too shabby a playlist. 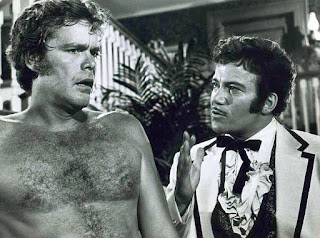 He doesn't catch fire. It doesn't help that he gets cast in some real stinkers, but he goes back to guest work in television, much like Rick Dalton. Lancer (you guessed it), Bonanza, The Virginian, The F.B.I. (more cross-collateral with Once Upon a Time), and like as not, playing a charming psychopath. As he gets older, character parts. 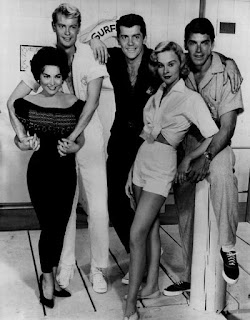 It isn't that his career went in the tubes. That's not what happened. It's that he couldn't or didn't leverage his early advantage. Maybe he was disappointed in the parts he was offered. Maybe he didn't have enough animal magnetism. He reinvested himself in theater, and was a highly-praised acting teacher. It's not like he lost his chops. It's one of those unfathomables. He should of been a contender, along the lines of Bob Culp or Brian Keith. 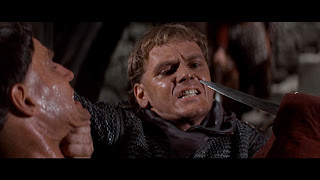 All the same, he's got a legacy, whether or not he's the real-life model for Rick Dalton or not. That's just a conceit on my part. Every time I watch The War Lord, I think, Jeez, this guy is good. And this is a picture, basically, where everybody overacts. On the other hand, it seems so physically authentic. The bare stone tower, the winding stairs. When do any of these people bathe? you can only wonder to yourself.

So there it is. My little paean to Guy Stockwell, probably over-thinking on my part, conjured up by Tarentino.
Posted by David Edgerley Gates at 00:00

Ineresting. I remember a lot of those TV shows and actors.

This was fun, David. I remember all (and liked most of) the actors you mentioned. And, as I think I've said before, I thought Tarantino did a great job with Once Upon a Time in Hollywood. Interesting post! (I don't think I ever saw Edd Byrnes in anything except 77 Sunset Strip.)

It's always interesting to try to figure out who's the inspiration behind a character. And success is such a crapshoot in Hollywood. It's a world where there's an alpha-shark level of competition. Of all the body-builders who came to Hollywood, Who'd have guessed that Arnold Schwarzenegger would be the one to break into superstardom?

This is one of those rare instances I could regret growing up without television. Almost…