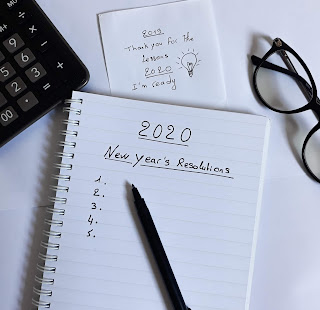 I don't know about you guys, but for me, the end of 2019 was memorable in all of the right ways. Two big publishing projects saw the light of day this year, and in the wee hours of New Years' Day, I closed the book (literally) on a third one on which I'd been way behind, and about which I'm not quite ready to talk (more on it later).

So far, and I know we're only one week in, but so good on the writing front for me, this new year. How can I make a determination this early? Simple.

It's all about goals.

Everyone comes up with New Year's resolutions, even if they don't call them that. The end of the calendar year is a perfect spot at which to recalibrate, to take stock, to shed what's not working for you and embrace what is. To try new things and see how they work as well.

If you're like me, your wake is littered with the detritus of previous failed resolutions, and for many of us, this year will likely be no different. Want to achieve your goals, specifically your writing goals, this year?

How to do this?

Incrementally. Seriously, it's all about scale.

If the goal is productivity ("I'm gonna write every day," etc.) then try this: "I am going to try to write every week. If I can get in a couple of days of writing, even for an hour, then the next week I'm going to try to work in three days/three hours, and so on, up to a realistic goal of getting five days/five hours per week."

This approach works. And as I said, it's completely scaleable.

If that turns out to be too much, scale it back. If you get discouraged and can't keep up with your goals, ratchet back that word count/day commitment until life is no longer in the way (I have a seven year-old at home and a demanding day gig which requires navigating, so I feel your pain, believe me.).

And that's another thing you can do to help stick with your writing goals: plot out the coming year. If you have a day job (which, as I mentioned, I do), and the stresses and demands of said job are cyclical, then plan for that. For example, in my day gig, September and early October are my highest impact times, so I allow that not much word count gets done during those days.

So if you know you're not going to be terribly productive during a certain time of the year, build that in to your schedule, and cut yourself a break. In fact, cut yourself a whole bunch.

Build downtime in to your writing schedule. Creativity is stealthy. It tends to sneak up you. Grinding things out is what powers outlining and rewrites. But giving your brain a break can really boost your creativity. Google it. There's a ton of neuroscience research on the importance of play in the creative process.

And on that note, with several recent writing goals more than hit and a few milestones under my belt, I'm off to do precisely that!

Got New Year's Resolutions/Writing Goals? Feel free to weigh in and broadcast them in the Comments section.

See you in two weeks!
Posted by DoolinDalton at 01:12