Your Guide to Not Getting Murdered...


by Eve Fisher
First of all, a big shout out to Janet Rudolph and her posting of one of the funniest - and truest - reads I've seen in a while:  "Your Guide to Not Getting Murdered in a Quaint English Village" by Maureen Johnson.  (Read the whole HERE)  Read it now, and then come back and  I'll continue on with some more handy tips.

When it comes to English Villages, I bow to her amazing expertise and only add one extra warning:  Don't be a spy.

Half of episodes of the 1960s TV show The Avengers were Mrs. Peel and John Steed tracking down dead / missing spies or each other in quaint English villages.  (The Town of No Return, Small Game for Big Hunters, The Living Dead, etc.)

My personal favorite was Epic (Season 5, Episode 11), where a bunch of has-been retired silent film stars kidnap Emma to make "The Death of Emma Peel" which was, from the scenes we see being filmed, a mish-mash of everything from Mourning Becomes Electra to The Perils of Pauline.  Absolutely hilarious.


When it comes to American small towns, the immediately obvious murder victims are:

The man/woman everyone hates.  And there is always at least one.

The town gossip.  These come in two types:  mean and relatively harmless.  In real life, the mean ones almost never get killed (mainly because they're very scary) while the harmless ones sometimes do when they get hold of the right information at the wrong time and pass it on to the wrong person.

The unknown ex-_________ of someone important who comes to town and pretends they're just passing through.  Next thing you know, they're dead.  If you're someone's ex, don't visit their small town unannounced.

The person on the phone who is just about to give valuable information about who / what / where / why.  (This was more fun back in the days when they got coshed on the head at a public phone booth, but cycling at the gym while on the smartphone works, too.)

There are no impoverished aristocrats.  However, there is always at least one Pioneer Family who by now has run to seed and drugs.  (See Neil Inveig, found shot to death in the opening of my own Public Immunity, who was Laskin's drug dealer among the upper crust.  There's still considerable argument in Laskin about who actually killed him, and it crops up every once in a while.)  Anyway, this feckless person is usually the catalyst, and occasionally the victim, of murder.

The pregnant girlfriend of the man everyone hates, the feckless Pioneer descendant, the sleazy politician / sheriff / officer.  This ties right into the basic American trope of:  if a woman wants to stay alive, she must not have sex with anyone outside of marriage, but even within marriage, don't marry the hero!  See my February column, Why There Always Has to Be a Virgin.

Don't be any of these.

As far as dangerous places in American small towns, there are some significant differences from English villages:

If you're in the High Plains and / or the West, "quaint" is not the term to use for many small towns.  Windswept, yes.  Desolate, even.  But not quaint.

Also, no American bar is as sacred in the same way as the English pub.  Murders happen.

On the other hand, not many people get murdered in American churches (gunned down by a mass shooter is another story), perhaps because that steeple is an obvious target for God's wrath in the form of a bolt of lightning, and most everyone truly believes in God's wrath.  After all, they've lived through floods, fires, tornadoes, (hurricanes on the coasts) massive thunderstorms, earthquakes, hail at harvest time, droughts, etc.  Most farmers and ranchers expect wrath to be unleashed at various intervals, so it's best not to anticipate it by downright blasphemy. 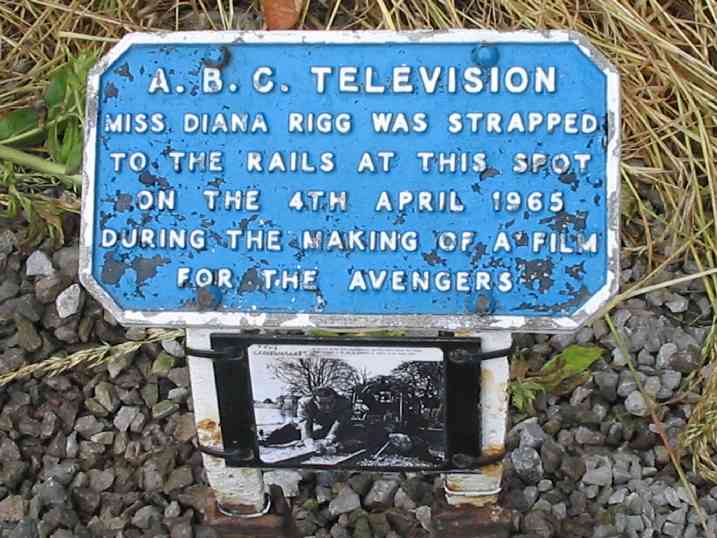 People are not nearly as fetishistic about trains in America as in Britain.  Oh, they have their fans, and most people enjoy a nostalgic ride on one, but the truth is when it comes to trains, Sheldon Cooper is far more British than American.

I think some of the reason is that Americans prefer individual transportation.  Fast cars.  Pick up trucks.  Small planes are popular.  Also ATVs, jetskis, motorcycles, snowmobiles, and anything else that can make a significant amount of noise and cover a lot of ground fast.

There are no marble busts in American small towns.  There are (more or less) bronze statues.

The varieties of death available to the average American increases dramatically as you head into the hinterlands.  Farms often have passels of hogs (which will eat anything), and other large animals that could be used to stomp someone to death, not to mention lots of heavy equipment.  Even in town, there are sheds stuffed to the gills with the odd stuff that could be used for nefarious purposes, from post-hole diggers to sledgehammers.  One of the reasons that English villages are quaint is that they apparently never need of any of these things.  Gardening shears seem to be as much as they ever use, at least on TV.

I must add the news that at least in Midsommer, the weapons of death have gotten exceedingly creative over the more recent seasons, including a cricket bowling machine, a paper cutting guillotine, a post hole digger, and yes, large animals. The relative lack of guns- except sporting rifles- has certainly led to curious minds to some imaginative solutions.

Janice, I do think that the plethora of guns in our society does lead to a certain lack of imagination when it comes to murder plots. Ah, well. We make do with what we have!

Must tell you, I got the entire Avengers DVD set awhile back, but haven't yet (re)-watched many episodes. Humming the theme song right now . . .

And I think it's worth mentioning the quaint English village--The Village--in The Prisoner. (The Patrick McGoohan TV series, not the Ian McKellen miniseries.)

John - I, too have the complete Avengers DVD set.
Don - I loved the original The Prisoner. That and the Avengers were two shows I couldn't wait to see every week. Oh, and a third, that almost no one's ever heard of: Robert Loggia in T.H.E. Cat.

I love it, Eve. Brilliantly done.

I also advise being wary of any house older than a hundred years. The older it is, the more likely the chance of demise.