by Travis Richardson
Several months ago author Simon Woods asked me if I could write a story for an upcoming collection of stories, Trouble and Strife. The concept is to take a word or 2-word combination from cockney slang and write a story about it. The Cockney slang was developed in East London back around the 1850s for criminals and street merchants to communicate to each other in a code that others wouldn’t understand. For example they would use the words “bacon and eggs” for the words legs. And then to make it more confusing they might only refer to the first word instead of the complete words. So a phrase might go something like: “Check out those bacons over there.”

Here is a video explaining the rhyming scheme better than I can:  https://www.youtube.com/watch?v=La7Tg5e547g  And you can find a list with several slangs here: https://en.wiktionary.org/wiki/Appendix:Cockney_rhyming_slang

“Cockney rhyming slang is something that’s engrained in everyday British speech.  It’s distorted our mother tongue to the point that half the time people don’t realize they’re using it.  Even Americans don’t realize it.  “Chewing the fat” is pretty common in the US but it’s rhyming slang for “chat.” My mum is technically a cockney but my dad tossed around the odd gobbet of cockney rhyming slang all the time which baffled me as a kid until he taught me.  I love rhyming slang.  I love its creativity and imaginativeness.  I like that it keeps you on your toes when you’re having to decode a conversation while you’re having it.  I especially love the colorful phrases rhyming slang kicks up.  They paint a picture—and that was how I wanted my writers to feel.” 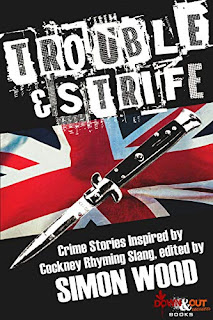 Once I understood what Simon was asking for my mind shot over to a particular scene in the 1990s Scottish film Trainspotting when the characters are actually watching trains and not shooting up heroin. One character (John Lee Miller’s Sick Boy, I believe) turns to Ewan McGregor and says he’s “fuckin’ Lee Marvin.”

I’ve maybe seen the movie twice and probably not in 15- 20 years, but somehow I recalled the moment when I heard a cockney rhyme and knew what it meant. So I wrote a revenge action story called “Lee Marvin” that would fit within the famous actor’s repertoire. The story kicks off with a tall, white haired protagonist who has been double-crossed, shot, and is starv…very, very hungry.

Here are a few more stories featured in the collection as described by their authors.

Steve Brewer
Babbling Brook (for “crook”) was one of the first Cockney phrases Simon mentioned when recruiting a story from me. I immediately thought, what if Brook was a person...

Johnny Shaw
When I put a list of Cockney slang in front of me, Dicky Dirt jumped out at me. I didn’t know what it meant, but it sounded like the nickname of a buddy back home. Gweez, Bucket, Kirch, Nuts, Dong, and Snout are all people I grew up with. Dicky Dirt would fit right in. When I learned that it was the slang for shirt, that was cool, because a couple of my friends wear shirts. You know, if there’s a funeral or wedding.

Catriona McPherson
My story "Barnet Fair" is set in a hairdresser's salon called . . . Barnet Fair. Two reasons. First, my favourite Cockney rhyming slang is the stuff I've heard and even used my whole life and didn't know was Cockney rhyming slang. I never wondered why a hairdo was called a barnet (and me a linguistics graduate!) [[just like I always thought "brassick" was the word people were saying when they had no money, because money = brass and it's sickening to have none. In my defence, how could anyone get "boracic" = boracic lint = skint = broke]]. The other reason for the story was my swooning in delight after reading Renee James' Seven Suspsects, whose protagonist is a hairdresser (note: this is not a cozy) and the way it brought back memories of my own days as a Saturday shampoo girl.

Colin Campbell
When Simon told me he wanted a short story for his anthology, Trouble & Strife my first thought was, Wife. That quickly morphed into Wife Beater and I knew that Trouble and Strife was the story for me. Trouble was, that title had already been taken so I muttered a few choice Anglo Saxon words and tried to choose something else from the list of available slang terms. But I couldn’t shake Wife Beater, which is somebody who beats up his wife in England but a sleeveless vest in America. Then Trouble and Strife became available again and I had my story. Now all I had to do was write it. The proof being, you’re reading it now.

Robert Dugoni
My story is “Pleasure and Pain.” I travelled that March with my son through Germany’s Black Forest and we came upon many small towns, with people who seemed guarded. They were friendly but there seemed to be something hidden. With the gray and the rain it added to the shroud. So I said to my son, this would be a great setting for a story about a town hiding secrets.

Susanna Calkins
I selected “Tea Leaf” which means thief. The phrase instantly evoked a burglary for me, and allowed me to explore a question I’ve always pondered. What would I do, if I were caught in a store robbery, and I suddenly realize that one of the robbers is someone I know?


Other stories in the collection are:

You can get your copy of Trouble and Strife directly from Down and Out Books, Amazon, Barnes and Noble and other upstanding vendors.


Wishing everybody a happy New Years along with extra reading and writing!

Posted by Travis Richardson at 00:00