I am delighted to have a story in the December issue of Mystery Weekly Magazine, my first appearance there.  "Robot Carson" is, I guess, the second time a story of mine began with what you might call a vision.  Not a dream, because I was wide awake.

The image that popped into my head was a woman answering the door and finding a chest freezer on her stoop.  Not literally a freezer, just an object of that size and shape.  Turned out to be a robot, working for the cops.

And as you may deduce, its name turned out to be Carson.

That's pretty much all I have to say about the story.  It's short.  Go ahead and read it and see what you think.  You can read the first page here. 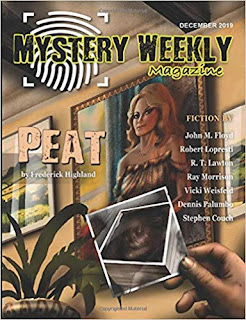 My first encounter with robots (well, barring Lost in Space and similar kiddy stuff) was in the ninth grade when I bought a paperback of Isaac Asimov's I, Robot. It's a collection of short stories   (The movie of the same name, by the way, has very little in common with the book.)

The stories are loosely connected by an interview with Dr. Susan Calvin, who appears in some of them.  She is the chief robopsychologist for U.S. Robots and Mechanical Men, Inc.

Perhaps the most famous thing about these stories is the Three Laws of Robotics.  (And by the way, Asimov coined the word "robotics."  He assumed it already existed.)   Many other authors have silently adopted the Laws or otherwise played with the concept.  Here they are:

Asimov found many clever ways to play with these rules (Example: If a robot could read minds, would hurting feelings count as harming a human being?)

Asimov went on to write a series of mystery novels featuring a pairing of human and robots, beginning with The Caves of Steel.

His robot cop appeared to be human.  As far as I know, none of his robots were ever mistaken for a freezer.  So I can claim at least that much originality.