by Lawrence Maddox
This is a complex culture, dear. The more intricate our society gets, the more semi-legal ways to steal. -Travis McGee, The Deep Blue Good-by

Why not take financial advice from a fictional character like Travis McGee? Is it possible that a made-up private eye (his business cards read Salvage Consultant, but he was cut from the same clothe as Chandler's Marlowe or Parker's Spenser) from fifty years ago still has something to say that's pertinent to our pocket book today?

It's not like the real-live experts have the greatest track record. Where were the warning bells from The Economist, Barron's, and the Motley Fools before our entire economy nearly went belly-up in 2008 in a sea of bad mortgages? Where was manic, in-your-face Jim Cramer? When the dust settled, and our tax dollars bought the whole mess with government bail-outs, only then did we learn how vast a con-job had been perpetrated on America.

At least Jim Cramer, to his credit, went on the The Daily Show and admitted that he and others should've done more to foresee the impending doom. Jon Stewart delivered a scorching rebuke, even while admitting it wasn't fair for Cramer to be the face of the burst housing bubble. "I understand you want to make finance entertaining," Stewart memorably said, "but it's not a f***ing game." It was a tiny glimmer of retribution for the financial crimes that no one seemed to be paying any legal price for. I cancelled my subscription to Barron's. They have yet to respond to my letter.

Since Travis McGee and the Busted Flush first sailed into our consciousness in 1964 with John D. MacDonald's  The Deep Blue Good-by, there's been plenty of bad faith, exploitation, and corruption in and of our economic institutions. Because of McGee's quirky ways of dealing with money, he would've skirted all of them. He likely would've avoided even the kinds of massive fraud that computers and the internet have made possible, two mainstays of modern life that John D. MacDonald couldn't have foreseen. 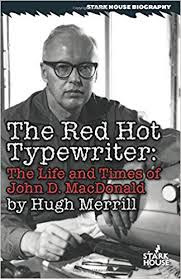 My favorite story about John D. MacDonald is what he did after being discharged from the Army in 1945 after serving in the Office of Strategic Services.  According to Hugh Merrill's excellent biography of MacDonald, The Red Hot Typewriter, MacDonald's wife Dorothy convinced him that writing would help him get over the bleakness of war. MacDonald listened, writing a 2000-word story titled "Interlude in India." Unbeknownst to MacDonald, Dorothy sent it to Story magazine. When MacDonald returned home from the war, his wife surprised him with the news that the magazine had bought his story for $25.

According to Merrill, at first MacDonald didn't think he was a real writer. Years later, MacDonald remembered thinking at the time, "My goodness, maybe I can actually be one." McDonald threw himself into being a professional scribe after his army discharge in 1946. "During his first four months as a writer he turned out more than 800,000 words and got a thousand rejection slips," Merrill writes. "He spent eighty hours a week at the typewriter and made sure that twenty to thirty stories were always in the mail." MacDonald lost twenty pounds in the process. That's amazing commitment.  MacDonald started selling stories to the pulps, and a legendary writing career was born.

It's also important to note that MacDonald graduated with an MBA from Harvard in 1939. Once MacDonald got the writing bug he turned his back on pursuing business and finance as a daytime gig, but economics played a big part in many of Travis McGee's cases. In Nightmare in Pink ('64), Travis has to unravel a gigantic financial scam run by a bank vice president. Pale Grey for Guilt ('68) involves inflated stock prices as part of a revenge plot hatched by McGee.  McGee and his partner Meyer pose as investors in The Empty Copper Sea ('80), a story involving life insurance, settling estates, and a millionaire who may have faked his death. I'd guess most of the Travis McGee novels center on elaborate financial schemes.

Meyer, Travis McGee's occasional partner in crime, is an academic, a world famous economist. Meyer's boat is called the John Maynard Keynes, after the influential British economist who said "The market can stay irrational longer than you can stay solvent." In a November 1986 article from Psychology Today, Dr. Raymond Fowler concluded that MacDonald and Meyer had nearly identical personalities. Apparently economics remained very important to MacDonald.

So what were the financial tenets that would've kept Travis McGee not only solvent, but able to pick and choose his gigs, free to enjoy boat parties and Fort Lauderdale's nightlife? From The Deep Blue Good-by:

Travis McGee could be an amiable jokester and some of this is meant to be tongue-in-cheek. I mean, who didn't love Green Stamps? I was too young to use them when they were around, but I still fondly remember sticking them all over my room. And libraries? Both McGee and Meyer had plenty of books on board their boats, though MacDonald did facetiously call McGee an illiterate. I get what McGee is really saying, though. He just didn't trust all the things honest citizens were supposed to trust. Emotion rarely clouded his judgment. He wouldn't be a sucker for emails from a Nigerian prince requesting bank account numbers and wire transfers.

McGee wouldn't be hurt by all the rampant credit card schemes that have been stalking the rest of us because he didn't use one in his name.  He wouldn't  be "skimmed" at a gas station. He wouldn't be phone-scammed by crooks who can spoof phone numbers. He'd be immune to phishing. His private info would be safe from the hackers who stole the data from 160 million credit cards in 2013. Or the Target breach from the same year. Or earlier and later breaches.

Payroll deductions were a joke to McGee. As were retirement benefits. McGee took 50% of the loot he recovered, hiding his cash away from prying government eyes in a safe aboard his boat. I pay my taxes and appreciate all the good things our tax dollars can do. Like the rest of us, I'm also outraged when our money seems wasted. McGee didn't have to worry about any of that. As far as retirement bennies, we've all heard stories about people unfairly losing their retirement plans due to heartless business practices. Enron, anyone? I have a relative who lost his benefits when Hostess folded.  Plus Zingers are now half the size that they used to be.

When the housing bubble burst, and homes in some areas stood hauntingly vacant, McGee's 52-foot houseboat would've been safely parked in Bahia Mar Marina's Slip F18. Sure, he had to scrub barnacles, but for Travis McGee boat maintenance was much more of an enjoyable work-out than actual work.

McGee wasn't totally disdainful of economic tools, he just didn't trust them. In Travis McGee's final bow, The Lonely Silver Rain ('85), McGee discovers that he has a daughter. His ultimate financial move, his last investment, is to take all the money he has on hand (minus a couple hundred bucks to live on until the next job comes along) and place it in a trust fund for her. It was a total Travis McGee move, the kind of generosity that McGee showed to others throughout his long run of adventures. He couldn't have predicted that he was done after this last act of selflessness, anymore than MacDonald could have guessed that heart surgery with an 8% fatality rate (that's what the experts told him, according to Hugh Merrill) would kill him in 1986.  Perhaps that's the final investment advice we can take from the late great Travis McGee. People first, money second.

I'm Lawrence Maddox.
My novel Fast Bang Booze is available from DownAndOutBooks.Com.
Feel free to harass me on twitter, Lawrence Maddox@MadxBooks. Or at MadxBooks@gmail.com.