I'd never seen The Breaking Point, although I'd heard things about it, but now there's an excellent DVD transfer available on Criterion. I'm here to tell you it's one hell of a movie, undeservedly neglected. 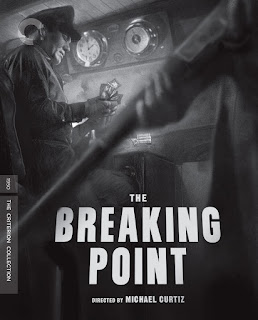 First, some background. The story goes that Howard Hawks and Ernest Hemingway are on a hunting trip. Hemingway's bitching that Hollywood can't make a decent picture out of any of the books he's sold them. Hawks says, They don't get the books. And you do? Hemingway asks him. Hawks shrugs. Sure, he says. I could take your worst book and make a terrific picture out of it. We imagine a very long pause here, and then Hemingway goes, Oh, yeah? And just which one is my worst book? Hawks doesn't miss a beat: To Have and Have Not. Okay, asshole, Hemingway says. You got the rights. Put up or shut up.

Hawks goes back to L.A. He calls in William Faulkner. Faulkner probably isn't that big a Hemingway fan in the first place. He tells Hawks the novel's unfilmable. You'd never get it past the Hays Office, for openers. C'mon, we gotta do something, Hawks says. They sit down with Jules Furthman, another longtime screenwriter, and hash out the back story, what happened beforehand. They make up so much, Hawks later says, that there was enough left over for a whole other picture. 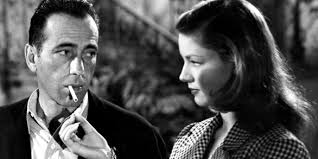 You guessed it, The Breaking Point. Which is actually credited to Ranald MacDougall, who just for goobers and grins, also worked on Mildred Pierce; The World, the Flesh, and the Devil; and Dark of the Sun. No slouch, he.

The degrees of separation - or cross-pollination - are I think significant. To Have and Have Not (1944), Bogart and Hawks. Treasure of the Sierra Madre (1948), Bogart and John Huston. We Were Strangers (1949), Garfield and Huston. The Breaking Point in 1950. Directed by Michael Curtiz, who made some zingers, but never breaks into the top lists of auteurs. Maybe that's an oversight. The Breaking Point is certainly atypical of Curtiz. It actually has a lot more in common with Sierra Madre and Strangers than it does with Casablanca. You wouldn't think of Curtiz as a noir guy, but here he delivers in spades. 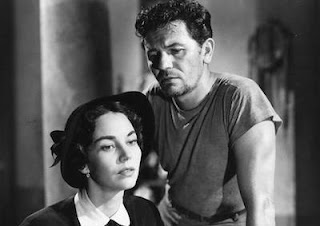 Then look at Garfield, in context. The Breaking Point was his next-to-last picture; he died after the next one. He himself thought The Breaking Point was his best and most transparent performance. You have to give a passing glance at his politics, which were resolutely Leftie. He wasn't blacklisted, but he was skating on thin ice. Maybe he died before the bastards could get to him. They would have loved to nail him, just because he was Julie Garfinkle from the Lower East Side.

Garfield never did overtly political parts. Gentleman's Agreement, mmmh, maybe. Force of Evil? The movie itself is about moral choices, and Garfield's character makes the leap of faith in the end. But he isn't represented as Everyman. It's not a Marxist fable. The closest he comes is in We Were Strangers, and even there he keeps his distance. He seems mistrustful of absolutes. He's missing the zeal of the convert. 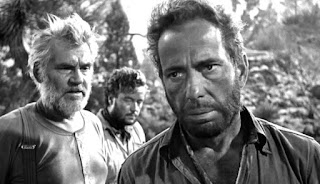 In this, The Breaking Point is completely consistent. In the most basic and classic sense, it's existential. The guy does what he does because of who he is; or put it the other way around, he demonstrates who he is because of what he does. Skip the philosophy.

Oh, and as if I had to tell you, you're never going to look at Patricia Neal the same way again. 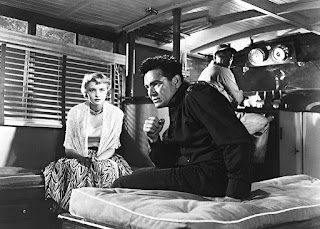 The Breaking Point, moment to moment, is tighter than To Have and Have Not. It might even be a better picture. I think it is a better picture than We Were Strangers, and We Were Strangers, trust me, ain't no dog. I'd go so far as to say The Breaking Point rivals Treasure of the Sierra Madre. No, it doesn't have Bogart disintegrating like a sprung watch, but it's got a decent guy going over the edge, and you don't know if he's coming back.  Neither does he.

Email ThisBlogThis!Share to TwitterShare to FacebookShare to Pinterest
Labels: David Edgerley Gates, Howard Hawks, John Garfield, John Huston. Ernest Hemingway, Jules Furthman, The Breaking Point, To Have and Have Not, Treasure of the Sierra Madre, We Were Strangers, William Faulkner

O'Neil - I'd put FORCE OF EVIL at the top of my own Garfield list, and WE WERE STRANGERS sneaks up and sucker-punches you, but THE BREAKING POINT ran over me like a truck. It's like Anthony Mann's T-MEN, in that sense: you can't believe it hits you that hard.

This piece reminded me of a post I read ages ago on another website written by the artist who created the cover for the DVD. I though you all might enjoy it:

Thank you, Joe. I'll check this out.

David, I've seen a sizable proportion of films you touch upon, but I feel like a freshman who wandered into a grad-level course. Whew! A lot to go through. Thanks, David.

A terrific piece, David. I agree, The Breaking Point is pretty great. I didn’t know about the Hawks-Hemingway angle. I really like Hawks. He’s probably one of the few directors who writers like Hemingway and Faulkner respected.

Leigh - I'm fascinated by connections (obviously). For example, the look of a lot of Anthony Mann noirs is because of his cinematographer, the great John Alton. The look of THE BREAKING POINT is due in large part to cinematographer Ted McCord, who later went on to shoot a deeply weird B-picture for Leslie Stevens called PRIVATE PROPERTY. A must-see.
Lawrence - Try and track down Robin Wood's book HOWARD HAWKS, out of print but I think originally part of the UCBerkeley film series: it's hagiography but well-researched and very informative. Hawks was apparently not the nicest guy, but neither was John Ford. I think the two of them pretty much shoulder everybody else aside. I like Faulkner's remark (himself a charmer but an awful shit, personally) in regard to what it takes to make a great book: "CRIME AND PUNISHMENT is worth any number of little old Russian ladies."