by Paul D. Marks
I was looking for a movie to watch and Strange Impersonation, directed by Anthony Mann, sounded interesting, so I put it on. 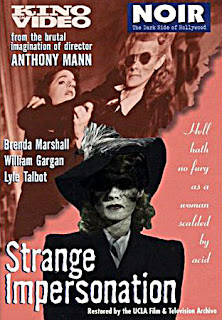 Here’s the basic plot as told by Bruce Eder on All Movie: “Nora Goodrich (Brenda Marshall) is a dedicated research scientist who is very close to a breakthrough in her field of anesthetics. She allows herself to be used as the subject of an experiment, and becomes the victim of sabotage by her jealous assistant (Hillary Brooke), who is her rival for the affections of the same man (William Gargan). Nora is scarred by the accident, but fate takes a hand when a vicious blackmailer (Ruth Ford), part of an extortion scam that was being worked on her, breaks in to her apartment. In the ensuing struggle, the lady grifter is killed and then mistaken for Nora, while the real Nora goes into hiding. Taking the identity of the dead woman, she realizes how she has been betrayed and maimed and plots an elaborate revenge, undergoing reconstructive surgery that changes her whole appearance. She then reintroduces herself into the lives of her former associates, in her new guise, and begins her revenge. Before her plans can be concluded, however, her masquerade backfires on her, when she finds herself accused by the police -- of the murder of Nora Goodrich” (https://www.allmovie.com/movie/strange-impersonation-v111934#ASyuCJD6Q4IVUJxw.99) 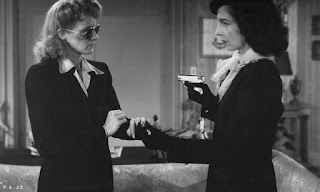 Okay, it sounds pretty convoluted, but just go with it, ’cause that’s not the point of this post.

It started going along pretty well. Nothing great, but I didn’t turn it off either.

So, after the ‘accident,’ and after the blackmailer dies and is mistaken for the scientist, the scientist leaves her fiancé and her life behind. She heads out west. Has plastic surgery to look like the woman who was blackmailing her. She then returns to the city as that person and begins on a course of revenge against her former assistant. She insinuates herself back into her former fiancé’s life, trying to steal him back from his new lover, her former assistant. Before she can pull it all together, everything backfires on her and she finds herself accused of murder—the murder of herself (though really, as we know, the blackmailer). 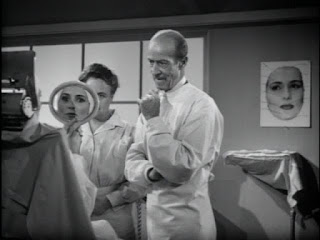 …that all of the revenge part of the plot turns out to be a dream. Everything after the explosion/‘accident’ didn’t really happen. It was all a dream in the scientist’s head after the accident. So all the emotion and excitement and concern that we invested in the character/s was for nothing. Because none of it was real. There were no real consequences. The assistant didn’t really make an explosive compound that disfigured the scientist. The scientist didn’t really get plastic surgery, return to exact her revenge, which was thwarted before should could finish it and she wasn’t really arrested for the murder of…………herself.

None of it happened. Because it was a dream.

And because it was a dream it’s a cheat. And it makes me angry and it makes me feel like I wasted 68 minutes of my life. I don’t like movies where major plot elements turn out to be dreams. I’ve invested myself, I’ve given over my suspension of disbelief. And then none of it matters.

I won’t name other movies or TV shows where things have turned out to be dreams, because I don’t want to give them away for those who haven’t seen them (with a couple exceptions below). But I can’t think of one that I like once I learn the events that took place were just a dream and didn’t really happen. There are, however, a couple of exceptions: one film noir that I like fairly well where much of it turns out to be a dream, but even that one which, if there is an exception to the rule is it, disappoints me in the end because again, there was no real jeopardy. There were no real consequences. So what did it all amount to? Nothing. The other exception is The Wizard of Oz, but that whole story is a fantasy. We’re not supposed to buy it as a real story as we are with other movies.

(Just as a side note here: I’m not talking about movies like Spellbound, where dreams are used to analyze a character and figure them out. That’s fine. I’m talking about movies where we learn that much of the action was a dream and thus didn’t really take place within the context of the story.)

Freud might have loved dreams and found them useful in psychoanalyzing people. But in my opinion, in a movie they’re nothing but a cheap cheat.

What do you think? Do you find movies based on dreams a cheat? Do you feel deceived after you’ve seen them? Let us know.

My story Past is Prologue is out in the July/August issue of Alfred Hitchcock Mystery Magazine. Available now at bookstores and newstands as well as online at: https://www.alfredhitchcockmysterymagazine.com/. Hope you'll check it out. 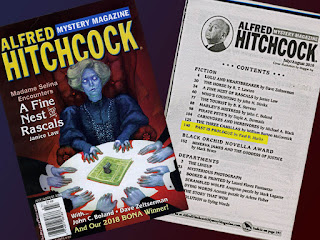