Red Dawn was released 35 years ago this August. I think it's aged pretty well. The silly stuff is just as silly as it was back then, and the good parts still hold up.

If you don't know the premise, here it is: Russia invades the U.S. Proxy forces from Cuba and Nicaragua come boiling up the middle of the country, between the Rockies and the Mississippi, the Soviets reinforce across the Bering Strait and down into the Great Plains. Caught by surprise, small pockets of resistance spring up, and in a small Colorado town, a bunch of high school kids learn evasion and ambush techniques, and take the fight to the occupying troops. If it all sounds faintly ridiculous, it is. 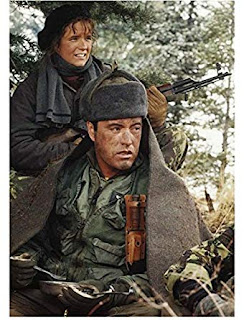 The writer/director John Milius got raked over the coals for what was widely seen as a Red-baiting, loony Right fantasy, but in spite of the fact that Gen. Al Haig loved it, Red Dawn is deeper than it seems, at first blush. It's not really about Colorado teenagers at all. To me, it was obvious from the get-go that Milius was making a picture about the Soviet invasion of Afghanistan, and the kids were stand-ins for the mujahideen. 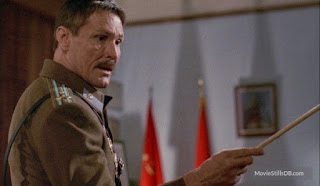 Aside from that, or in spite of it, or any and all of the above, I'm always drawn in by the sheer exhilaration of the movie-making. Once you swallow the set-up, the rest of it is inevitable, fated and austere. It's beautifully shot, by Ric Waite, the New Mexico locations framed in wide ratio. The score, Basil Poledouris. The rigorous structure, and the kinetic pacing, but at the same time a sense of natural rhythms, the movement of the seasons, the shape of silence. For an action picture, it's got its fair share of stillness and melancholy. 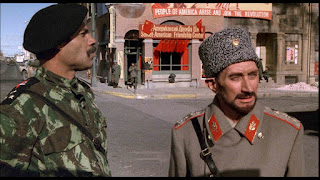 And for all that it's about the kids, it's actually the grown-ups who put it in sharper relief. Powers Boothe, the American pilot who bails out over occupied territory. "Shoot straight for once, you Army pukes," has got to be one of the great exit lines. Bill Smith, the Spetsnaz colonel brought in to exterminate the Wolverines. "You need a hunter. I am a hunter." (Bill Smith speaking his own Russian, a bonus.) Ron O'Neal, the Cuban revolutionary who loses his faith. "I can't remember what it was to be warm. It seems a thousand years since I was a small boy in the sun." 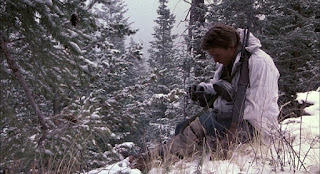 Red Dawn wears its heart on its sleeve. Its innocence, or lack of guile, is suspect, even embarrassing. But it has an unnervingly specific authenticity. It respects the conventions, and yet - I can't quite put my finger on it. The picture is subversive. It's not about glory, that's for damn sure. It's about loss, although it might be about redemption, too, but it doesn't promise us much comfort.

Some years later, I wrote a spy story called The Bone Harvest, set in the early onset of the Soviet invasion of Afghanistan. I have to wonder, the way we do, how much was I influenced by Red Dawn? Which might seem like a dumb question, but let's be honest, we pick up all kinds of stuff, attracted by its texture or reflection, like beach glass or bottle caps. Hemingway once said no decent writer ever copies, we steal. 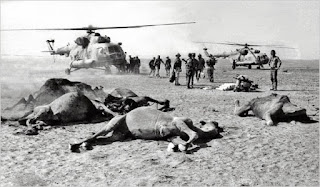 If in fact I took something away from Red Dawn for my own book, I hope it was a certain naive muscularity, the notion that you can will something to happen. I don't mean this in the meta-sense of getting a book written, I mean that the story I wanted to tell was how raw determination could put boots on the ground. Stubbornness a virtue, not playing well with others. If that's the lesson, it's not just the story arc of Red Dawn, it pretty much defines John Milius' career, but you could have a worse role model.


Posted by David Edgerley Gates at 00:00

David, I think Red Dawn has achieved a sort of cult status over the years, even to the point of being remade. And maybe I should give it another watch, as I didn’t like it much when I first saw it when it came out. I have a personal tie in to it. The original screenplay was written by my friend Kevin Reynolds. And I read and had some input on the early drafts. It was somewhat different, though all these decades later it’s hard to recall specifics. I do remember they added some characters that weren’t in the early drafts that I thought were extraneous. And I Iiked Kevin’s earlier drafts better than I liked the finished film – that much I do remember. But maybe I should give it another shot one of these days after reading your thoughts on it.

Great cult film. I hadn't thought of it as being the Mujahideen vs. Russkies, but then there is this line, which still works:
Col. Andy Tanner: All that hate's gonna burn you up, kid.
Robert: It keeps me warm.
Trouble is, of course, the mujahideen turned into the Taliban, and they're not going anywhere.

Red Dawn is a fun, non-cynical flick that needs to seen with an audience to be truly appreciated. It gets unintentional laughs for its occasionally over the top dialogue, but it’s a total original. Worthy of its cult status.

Critics slap on the word 'cult' when they can't figure out the ongoing popularity of a out-of-the-mainstream book, musical piece, or film. Sometimes they're simply enjoyed for the fun of it. That's how I remember Red Dawn, a student lounge sort-of fun 3am movie. Sometimes they even carry messages.