by John Floyd
I just finished writing a mystery/western short story which is set almost entirely on a stagecoach in Arizona in the early 1900s. To get a little extra inspiration, I first re-watched a movie by Quentin Tarantino called The Hateful Eight. It's nothing like my story, but some of that movie takes place on a stagecoach, and I wanted to see it again anyway.

The Hateful Eight (2015) is sometimes listed as The H8ful Eight, and one poster subtitles it "The 8th Film by Quentin Tarantino." (The first seven were, if you count only feature films and if you count the two Kill Bill installments as one movie: Reservoir Dogs, Pulp Fiction, Jackie Brown, Kill Bill, Death Proof, Inglorious Basterds, and Django Unchained.) I thoroughly enjoyed all of them, except maybe Death Proof, and even it had its moments--but let me say, before going any further, that you might not agree with me about the quality of these movies. A lot of folks don't. What I think you might agree with me about, though, is that they're all incredibly entertaining. And if a film is entertaining enough, I have found that I can forgive almost anything else about it. (How else could I love Blazing Saddles?)

Bottom line is, The Hateful Eight is a thrill ride, a violent, outrageous, fast-moving, wonderfully-cast, beautifully-filmed movie that could easily have been a stage play instead. Some might say it IS a stage play. The plot is completely driven by dialogue, throughout, and almost the entire film is shot in one location: a way station on a stagecoach line. There are a few scenes that take place outside the station, before and during a blizzard, but those scenes mostly involve the stagecoach in which most of the characters arrive. As usual, Tarantino plays around a little with the timeline, but in a good way.

He also uses several actors that have appeared in his previous films--Sam Jackson, Michael Madsen, Tim Roth, Kurt Russell--and the rest of the cast includes longtime favorites of mine like Bruce Dern and Jennifer Jason Leigh. In case you're wondering (I'm sure you're on the edge of your seat), the Eight are: 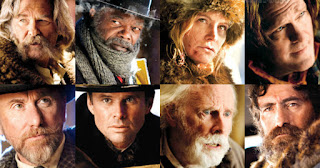 I'll let you match the faces to the names. NOTE: If you don't recognize the name Demian Bichir, you're not alone. I think he's probably best known as Mary-Louise Parker's love interest (and the mayor of Tijuana) in the Showtime series Weeds, which I really liked. If you still don't recognize him, you're still not alone, but I assure you he does a great job in this movie. Channing Tatum is also featured in a key role, but doesn't have much in the way of lines or screen time, which probably explains why it's not The Hateful Nine. 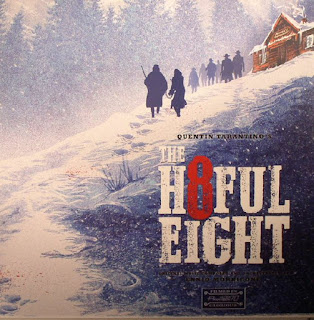 The main thing I wanted to say is that I think I learned several things, as a writer, from watching this movie multiple times. One was that the structure is almost perfect, and involves some really explosive and unexpected plot reversals. I always admire that. Another is the fact that, as I've said, well-written dialogue can indeed be enough to completely carry a film, start to finish. Not a play; a feature film. (And this is almost a three-hour-long feature film). A lot happens and a lot of folks get shot or otherwise dispatched in the course of the story, but the action is minimal compared to the dialogue. Once again, whatever you might think of Tarantino as a director (my wife wouldn't watch one of his movies if you handcuffed her to the theater seat), the characters in this film are fantastic, and are defined almost totally by what they say to each other.

They're also hateful. But I can forgive that.
Posted by John Floyd at 00:01