The Art of Memory


My pal Keith McIntosh was thinking out loud the other day, that when you're in the library, or a brick-and-mortar bookstore, and you go looking for something, you often find something associated - or even unassociated - by accident. He's not the only one to remark on this, of course, but Keith was wondering why virtual shopping can't be organized in a similar way. Amazon will show you other stuff you've shopped for or searched out recently, or stuff their algorithm suggests based on your purchase history, but it's market-driven. What about serendipity? You could be looking up the Tudors in the European history section, and stumble on some little-known thing about the Mongols, two shelves over. Same goes for learning basic crochet techniques, or high-altitude baking. It is possible to use the Dewey decimal system, say, to replicate the physical feel of shelves in digital. Or a visual, an imaginary bookstore that somehow leaves room for the accidental. I'm sure someone's thought of it before, and the question is execution: How do you design for the random, or peripheral vision? Engineering logic is linear, it's designed to filter out, to recognize pattern limits, not intuit a whole greater than the sum of its parts. 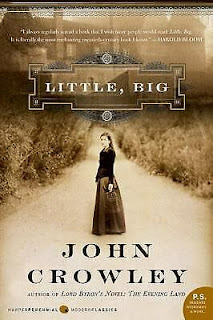 As it happens, I was re-reading yet again the John Crowley novel Little, Big, first published in 1981 and just as heartbreaking the fourth or fifth time around. Actually, this is one of those books I read all or part of every couple of years, like Mary Renault's Last of the Wine or Len Deighton's Bomber. As if shrugging into a familiar garment, yes, but always finding some new astonishment. I might be reading for technique - how, exactly, did they pull off such-and-such an effect? - but I invariably wind up getting sucked into the story, and I'm not looking for tips and tricks, I'm steering into the next tight turn. The grace and felicity is all.

Crowley develops an elaborate conceit in his book, the Art of Memory. This is in fact a real thing, the study of mnemonics, going back at least to Pythagoras, and later refined by Giordano Bruno. (Crowley has a long fascination with Bruno.) More recently still, there's the Frances Yates book titled The Art of Memory. I'm giving a sort of potted version of this, but the way Crowley explains it, you build a memory house, and people it with artifacts or avatars. You might set aside a room for Youth, a faded rose or a broken mirror to represent a path not taken, but the objects don't require literal consistency, they don't have to be an actual objective representation, they need only conjure up some specific smell, a taste or a time, a character of something, a suggestion, if only a sketch or a gesture. 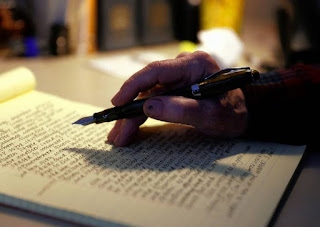 Now, supposing this house has many rooms, which you've added as needed, and some of those rooms left behind and the memory objects in them gathering dust - let's imagine we turn an unexpected corner and open a different door into that particular gallery, and see those memory objects back to front, a reversed perspective. Would we catch them unawares, surprised to see us, in a state of undress, so to speak?

In other words, what's two shelves over? Memory tends to repeat. Once we start down a train of thought, if it's well-traveled, we stop at the same stations. It may not be a straight line, but we ricochet off the same surfaces. It's almost certainly a hard-wired function. Maybe it's a protective mechanism. It's an almost impossible habit to break. Not only can we not change our personal history, we can't change how we think about it, or escape. 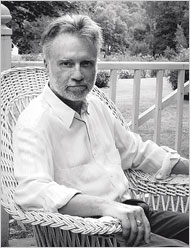 I'm fascinated by the mechanics Crowley imagines, going into the house of memory by the back stairs, and finding a different way to the front. And as you pass by them, things not quite where they're supposed to be, or not how you thought you left them. The truth is, it's not that we pass this way but once, but that we pass this way again and again, and each time we tell ourselves the same story.
Posted by David Edgerley Gates at 00:00

I'm going to have to read that book. Right now I'm re-reading (for the God only knows how many time) Renault's The Last of the Wine, in tandem with my first re-read of Sarah Bakewell's "How to Live: Or A Life of Montaigne in One Question and Twenty Attempts at an Answer". Both are wonderful.

Thanks for the recommendation David! I’ll check Little, Big out. Your comparison of memory to a house w/ rooms reminds of Sherlock Holmes’ theory of memory. He felt the same way, and that you didn’t want to fill it w/ the wrong kind of furniture.

A provocative post, David. The rooms for memories idea reminds me of A Little Course in Dreams, by Robert Bosnak, which I read back in the 80s. He discusses ways of remembering and analyzing your dreams, which I still almost never do, and he used the image of a filing cabinet or many rooms, a lot like you describe here.

David, a European television series's main character, a detective, constructs memory palaces to solve cases. After wracking my brain (French Belgian, Dutch?), I think it might be a Finnish production. I'll see if I can track it down for you.

David, the Television series is titled Bordertown in English. The original Finnish title is Sorjonen, the name of the eccentric detective. He constructs elaborate memory palaces, helped by very understanding wife and daughter. There's also a tough-ass Russian woman on the job too!