The other day I discovered, while piddling around on Amazon, a book called Dreyer's English--An Utterly Correct Guide to Clarity and Style. At first I didn't pay it much attention--I already own a lot of books about language and style. Some are worthwhile and some are not.

Then I remembered my wife telling me about a recent NPR interview with the author, Benjamin Dreyer, who is vice president, executive managing editor, and copy chief of Random House. I looked up the broadcast online and listened to it, and that made up my mind. This book sounded different from most of the others. I ordered it, received it in two days, and read it in one evening. (The book is no small, stick-it-in-your-pocket volume like The Elements of Style; it's almost 300 pages.) 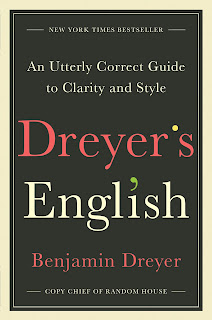 As it turned out, it was delightful. Or as close to it as that subject can be. Literary style--grammar, spelling, punctuation, capitalization, sentence structure, paragraph structure, word choice, word usage--can be a dry (Dreyer?) topic. But this book was not only informative, it was fun.

Here are just a few of the (mostly paraphrased) pointers and observations I found interesting in Dreyer's English.

- You don't always have to precede a sentence-ending "too" with a comma. It's okay to write "Me too."

- Feel free to end a sentence shaped like a question with a period instead of a question mark. It makes a statement, doesn't it.

- Always use the series (or serial, or Oxford) comma. You know this already, but the second comma in "red, white, and blue" is the series comma. Its use can prevent the following disasters:

My example: Attending the party were two hookers, Barbara Walters and Diane Sawyer. (Which implies two people instead of four.)

- Limit your use of words like very, rather, really, quite, just, pretty, and surely.

(I happily break them all the time, but it's good to hear an expert say it's okay.)

- Never use an apostrophe to pluralize a word. This also holds true for abbreviations: CDs, ATMs, IDs, SASEs.

- When a possessive apostrophe is used with a word ending in "s," put another "s" after the apostrophe. (Strunk and White agree with this.) Mr. Jones's tractor, Colonel Sanders's recipe, the boss's wife.

- If the title of a work starts with "The," include it in a possessive construction:

- Always use a comma if there's any question of clarity.

His example: In June Truman's secretary of state flew to Moscow.
My example: In time travel will become less frustrating.

(Unless such a combination looks confusing or awkward, like recreate or coworker.)

- Don't use "hissed" if what is spoken contains no "s" sounds. "Take your hand off me, you brute," she hissed.

- A tip for recognizing passive voice vs. active voice: If you can append "by zombies" to the end of a sentence, you've written a sentence in the passive voice. The floor was swept (by zombies).

Examples of our evolving language:

- Dreyer's view on internal monologue (or what he calls "articulated rumination"):

A final piece of advice:

- Sometimes it's better to just reword a sentence than to struggle with what's right or wrong or politically correct. 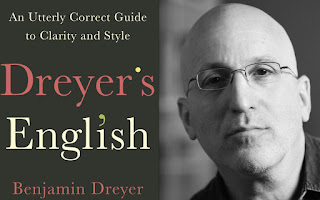 Some of his advice I didn't agree with. I prefer a.m. and p.m., he prefers A.M. and P.M.; he prefers "mind-racking" to "mind-wracking"; he doesn't like the word actually and I wouldn't be able to live without my actuallys, etc. (But my wife was kind enough to remind me that he works for Random House and my major was electrical engineering, so . . .)

To sum all this up, I haven't enjoyed a book about language this much since Eats, Shoots & Leaves, and that was sixteen years ago.

Give Dreyer's English a try.