Arthur and the Avengers


by Eve Fisher
I watched PBS' Secrets of the Dead:  King Arthur's Lost Kingdom, a couple of weeks ago, and loved it.

Now I'm an Arthurian enthusiast, which is a polite term for freaking fan!  I've read as many of the patchwork of legends and stories and (barely) histories of King Arthur as I could get my hands on, from the Historia Brittonum (around 828 CE) the Annales Cambriae (to sum it up:  Battle of Badon, Arthur v. Medraut a/k/a Mordred and a 21 year later rematch at the Strife of Camlann) to T. H. White's brilliant The Once and Future King (which invented the whole idea of Merlin living backwards) and many, many more.

The development and complexity of King Arthur's court at Camelot, his knights and their adventures, the increasing romance and chivalry combined with constant warfare and strange witches and magicians, the astounding character of Merlin, the literally bewitching Morgan le Fay and the fairly boring Guinevere (adultery and constant rescues - not my style.  Although I have to admire the aftermath in Tennyson's Guinevere, which has one of the saddest lines in all of poetry:  "Will no one tell the king I love him though too late?"),,,  The Arthurian legend is so old, so multi-cultural, and written over time by so many authors, that is perhaps one of the greatest legends in all of history, with immense mysteries, tangles, and knots that have never been solved, and perhaps cannot be solved.

Just the other day I saw a press conference, surrounding by a lot of trailers, for the new Avengers movie, Avengers:  Endgame.  Now I can't be the first to have noticed that everyone in the entire Marvel Universe is apparently turning up in what were stand-alone comics/movies, and there are more and more of them all the time.


NOTE: And before that, in everyone else's comic books. I remember Batman and Superman duking it out, at least on the cover. (I was never into either of them. My personal favorite comic book as a teen was Killraven, but that's another story.)

The Fantastic Four have hosted the Hulk, Ant-Man, Spider-Man, Wolverine, Ghost Rider, and the Silver Surfer. The Avengers originally consisted of Ant-Man, the Hulk, Iron Man, Thor, and the Wasp.  That changed over time, and by the time we get to the first movie version we have Iron Man, Captain America, the Hulk, Thor, the Black Widow, and Hawkeye joining forces to save the universe.  I remember when the first four all had their own comic strips. Now they work together. The next movie - more superheros! The Guardians of the Galaxy! Black Panther! Scarlet Witch! Falcon! Winter Soldier! God only knows how many more superheroes are going to join in the latest one.

Yes, I know, obsessive comicons know each and every character and their backstory, future story, occasional love interest(s), quirks, foibles, weaknesses.  I have sat in a van with a bunch of college students who discussed when/how Superman's cape changed for four hours.  So I get that.  But still, 16 superheros out to save the universe still seems like a lot, compared to the old days (yes, I'm getting old and nostalgic) when one - or at most four - were all that was needed to save Gotham, the planet, the universe, and whatever else was out there.

But wait!  It finally occurred to me that the Arthurian universe is exactly the same!  Not in armor or superhuman powers.  But in the fact that over the long, long, centuries and multiplicity of writers, every hero from almost every European culture got included in the Legend.  So here are some highlights from the major players:

King Arthur begins as straight Briton legend and moves on to become the Great King.  But his wife, Guinevere, is Welsh, according to the medieval Welsh Triads.  Her name in Welsh, Gwenhwyfar (or Gwenhwyvar), can be translated as "The White Enchantress", which would indicate that somewhere along the line, she had a story of her own.  And old one.  And perhaps - since Arthur as Christian king goes back to the Historia Brittonum, when he carried an image of St. Mary on his shoulders (or on his shield) - it could be a record of the Christian Briton King marrying the Welsh Pagan Princess.

We'll get into Guinevere's fling with Lancelot in a minute, because there are a lot more Welsh Pagan Princesses out there, including Morgan Le Fay.  She and Morgause are Arthur's older half-sisters.  Morgan is a witch, and (before some later legends made her evil) was Merlin's ally and friend.  She's also one of the ladies who take the dying Arthur to the Isle of Avalon, where he is waiting for his time to come back to save Briton.  (Note to Arthur:  Brexit needs you now.)

Morgause is much more problematic from the get-go.  Oh, the hell with political correctness:  she's a villain.  Married to Lot, the King of Orkney (one of the northernmost islands of Britain, and a far piece from Wales or Cornwall), they have four sons:  Gawain, Agravain, Gaheris and Gareth, all of whom become knights of the Round Table, most of them heroic.  She also has a fifth son with her half-brother, King Arthur, under circumstances that allowed them both to declare they didn't know their relationship at the time.  This story-line is proof, BTW, that
(1) Alcohol and darkness are a very old plot device to make sure the wrong people end up bedding each other and
(2) In the great sagas, ignorance never equals innocence.  Or at least, not freedom from consequences.  That fifth son is Mordred, who will eventually come to Camelot and destroy it.

But Gawain is a noble knight, one of the great heroes of the Arthurian sagas.  Pure Celt, but is he British?  There are indications that Gawain was co-opted from the early Welsh superhero Gwalchmei.  Or it could also be  - as Sir Bors says in White's The Once and Future King, "I suppose, they would have pronounced it Cuchullain in the North? You can't tell with ancient languages." Cuchullainn is, of course, the great Irish superhero of the Táin Bó Cúailnge ("Cattle Raid of Cooley").  Either way, there's a definite crossover.  Gawain stars in many adventures of his own, the best being Gawain and the Green Knight.


There's nothing quite like a green giant showing up at Camelot at Christmastime, demanding - as a boon - a beheading contest with a knight.  Gawain takes him up on it, and after being beheaded, the Giant picks up his head and demands that Gawain show up at his castle to reciprocate.  Adventures ensue.  It's one hell of a tale.  Among others, Dorothy Sayers and J. R. R. Tolkein did wonderful translations of it.

Kay is one of the oldest characters in the legends.  Arthur's foster-brother and seneschal, i.e., steward, he's kind of the Arthurian Hulk/Bruce Bannon:  sometimes he's boorish, violent, rude, and sometimes he's a great warrior. He has superhuman powers: no one is able to brave fire or water like him, he can go nine days and nine nights without the need to breathe or to sleep, he can grow as "tall as the tallest tree in the forest if he pleased" and has the ability to radiate supernatural heat from his hands.

Meanwhile, Lancelot is probably a then-modernization (yes, every age has always thought we're the most modern on the planet, and we've always been right) of a tale that has been told for millennia:  A royal infant, stolen by a water fairy (du Lac), grows up, and is presented to the world of warriors at a tournament (war games), where he fights three consecutive days in three different disguises, wins every time, and later, he rescues the queen (or princess) from a prison.  The love affair with Guinevere is a later addition, probably was introduced in the 12th century, perhaps at Eleanor of Aquitaine's Court at Poitiers (well known as the haven for troubadors), where they practically invented romantic love.

Sir Percival, a/k/a Parsifal, is the original Questor for the Holy Grail.  Chrétien de Troyes wrote his saga (while on the First Crusade, apparently), basing it (he said) on an older manuscript belonging to his patron, Philip I Count of Flanders.  The original manuscript is the first mention not only of Percival, but the Quest, and the Fisher King (which is a whole, mysterious, and beautiful legend in and of itself). 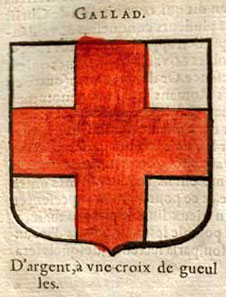 But the true Grail hero is, of course, Sir Galahad - the illegitimate son of Sir Lancelot and Elaine.  Some people think that Sir Galahad comes from legends of the Cistercian or other monastic orders (although I'd say he sounds more like a Knight Templar), with his absolute virtue and great martial skills.  "My strength is as the strength of ten, because my heart is pure" (Tennyson, Idylls of the King).  Galahad is the greatest knight, the purest knight, and he is the one who not only sees the Grail but is accepted by the Grail:  he gets to take it to heaven and neither ever come back.  (Sorry, Dan Brown.)

And Merlin.  Merlin Ambrosius, in Welsh Myrddin, enchanter, wizard, conceived by a demon, born of a woman, who sees the future, who perhaps goes mad, who lives backwards in time, who knows what will happen and cannot stop it, who has superhuman powers, and who is seduced and locked away by a woman, Nimue...  There are many traditions about him, and each author chose only a few.

And that is only a handful of a huge, multi-national, multi-ethnic cast, with powers that range from simple military ability to supernatural powers.  Each new writer, Geoffrey of Monmouth, Chretien de Troyes, Thomas Mallory, Tennyson, Charles Williams, T. H. White, Marion Zimmer Bradley, and on and on and on have added a new layer, and often new characters to the Arthurian Universe.  See the Camelot Project at the University of Rochester, King Arthur and the Knights of the Round Table, and King Arthur and the Holy Grail, for a nice combination of starter sites.  Oh, and read the books.

Sadly, imho, most of the movies about Camelot and Arthur have been pretty lame.  Mostly because, instead of embracing its richness and complexity, they try to contain the entire King Arthur story in 2 hours.  No, no, no.  What we need is a Peter Jackson version.  Three, four movies at the very least, maybe endlessly, like the Star Wars saga, the Star Trek saga, the Marvel Universe saga.  It would be wonderful...