by Steve Liskow
I've had a few weeks to adjust to Daylight Savings Time now. I like driving to and maybe even home from an open mic with some light in the sky. At my age and with cataract surgery several years behind me, night vision isn't one of my strengths. And getting up in the morning isn't an issue because our bedroom isn't on the sunny side of our condo. 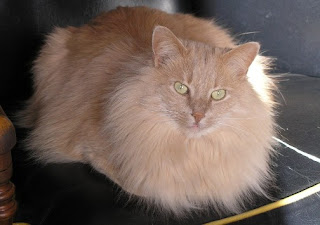 Besides, the time on the clock isn't an issue. We arrange our lives around our cat.

Ernie came to us as a rescue nearly ten years ago, along with his adopted sister Jewel. Ernie was just over a year old--he'll be eleven in April--and Jewel was seven months older. They were a bonded couple and amused each other--and us--constantly with their telepathy. Unfortunately, as often happens, they both had health issues. Jewel died about sixteen months ago and Ernie, who had been with her since he was eight weeks old, was even more devastated than we were. He's a Maine coon, which means he pretty resilient, but he needed about a month to reinvent his bearings. Fortunately, he's also creative and social.

Now, even more than before, Ernie decides when it's time to get up. During the night, he'll knock my alarm clock off my nightstand because it's redundant, and he walks across me and chirps when he wants attention. He doesn't need that clock or sunlight to know when it's time for breakfast because his stomach is more accurate than the Naval Observatory. At 6:45, he tells me he's hungry, even though it's not true. 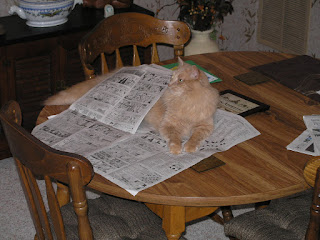 He munches on prescription dry food all night so the dish is practically empty when I go downstairs. I'll refill it and put out prescription canned food (He has stage two kidney disease, which he's held at bay for two years now), but he won't come downstairs until my wife does so he can help her read the newspaper. Since he's a guy, he prefers the sports section, but he'll settle for the comics.

After that, he wants me at my desk writing. 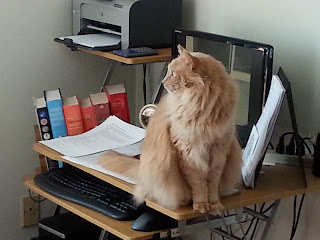 That's not negotiable. An hour later, he wants me to run a cup of water for him in the bathroom. Yes, he has a fountain downstairs, but now's not the time for that. He wants me at my desk for between 60 and 90 minutes, then he want either me or Barb to lie on the bed so he can cuddle for about 15 minutes. It recharges both of us.

In the afternoon, if I'm typing, he'll try to crawl into my lap between 1:50 and 2:10 because that's snack time. No argument. He may not have even been downstairs all morning, but now we put out dry food. He wants his non-prescription canned food (Which contains the cleverly-crushed blood pressure pill) at 4:30, but we try to stall until 5:00.

After that feeding, we get by without further guidance or supervision. He'll hang out in the office if one of us is at the computer, or he may come down to join us if we're watching TV (He doesn't get the point of women's basketball at all), but the evening is basically our own. 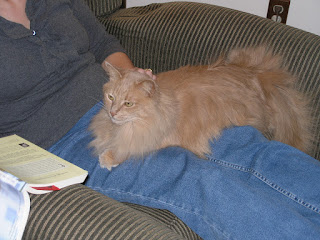 The plus side of this, besides having a very affectionate cat who likes to take care of us, is that we've learned to work in increments of 75 to 90 minute and then take a short break to replenish the energy. Granted, if I'm in the middle of a scene, I don't want to stop, but he's trained me to keep thinking about what I'm writing while he walks across me, and sometimes that few extra minutes gives me time to think of that snappy comeback that you always think of after losing the argument. If I'm not going to the health club or an open mic or shopping that day, I can do five or six 60-to-90 minute stretches of writing. Getting out of the chair to move helps my less than pristine back, too.

When Barb is rehearsing lines for a play (She averages about five productions a year), he's willing to sit and listen to her. He never gives her direction, but if she can't hold his interest, he'll curl up, tuck his tail over his nose, and go to sleep. Tough critics, cats. 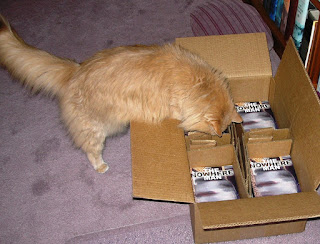 But they train us well.

I know O'Neil has a cat or cats, and I think other writers on this blog have dogs, cats, or both. How many of them help you write?