by Stephen Ross
I had a conversation with a robot the other day. Well, I think it was a robot. I have a Facebook page (for me "as a writer," separate from me the person), and every now and then, via the writer page, I get a message from someone I don't know. Sometimes the messages are casual: "Do you go for Father Brown mysteries?" Yeah, love him. Sometimes, they're kind of odd: "Are you feeling okay?" To which I rely, Yes, I am. Thanks! To which the guy replies, "That's wonderful!" and, I'm not kidding, sends me about 30 photos of himself hiking in forests with his friends.

Last week, I got a "Hi" from a girl; her user photo was blurry. I said hello. Blurry girl asked me, "How are you?" I asked her if I knew her, had we met at a recent writing event? She didn't answer; instead, she asked me if I really was a writer, like my Facebook page said. She asked: "Is that really a thing?" I replied that being a writer really was a thing. I asked her how she had found my page. She didn't answer. She asked several more random questions (with increasing randomness), writing in perfect English, with perfect punctuation (writers notice these things). Do I like where I live? How tall am I? I asked her if she randomly picked me to start talking to. I added a smiley face.

Blurry girl got defensive. She said I was hurting her feelings and she was starting to feel uneasy; she asked if that was my intention.

My face, staring at the monitor, was the raised left-eyebrow version of WTF? It then occurred to me... Was I right there, right then, taking a Turing Test?

Years ago, for amusement, I made a website. You could ask it a question and it would give you an answer. It was a rudimentary chunk of logic programming (in Perl), picking up on words entered and matching them to "answers" in a database of possible responses:


Q "How are you, today?"
A "Today is another day, much like yesterday."

Garbage in. Garbage out.

I replied to blurry girl by entering in a line of random gibberish, then a message in German about how I love jam donuts (Ich liebe Berliner!), and then a string of my best expletives in English, German, and Spanish. And a smiley face. She ignored all of it, forgot about feeling hurt and uneasy, and asked me if I preferred red wine to white.

Yeah, baby. I got your number. And it's ones and zeros.

I checked out her Facebook profile. She had been on Facebook for three weeks. She had fifteen friends. All guys. Her posts consisted entirely of reposts of articles about wrestling and gridiron. Fake? Almost certainly. Robot? Almost absolutely.

The internet is a weird place, and lately, a laboratory for A.I. testing. To quote John Lennon, Nothing is real (and nothing to get hung about).

In short, to quote William Carlos Williams, There are a lot of bastards out there. One of the internet's greatest virtues is the connectivity it provides: We all have access to the electronic playground. We can all come out and play together, regardless of our physical location. Sleuthsayers is an excellent example. However, that same connectivity also provides a certain type of persons, shrouded in near anonymity, with a medium to open the sewer of their souls to freely pour out their bile. 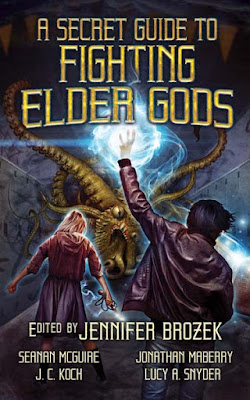 Anyway. Last year I wrote a Lovecraftian tale about how someone taps the negativity of the internet and uses it as a power source. The story is called The Tall Ones, and it appears a new anthology titled The Secret Guide to Fighting Elder Gods. I read a lot of Lovecraft when I was a kid; I was delighted to be asked to write a story for the book.

And in other news, I also have a story coming out this month in the new Mystery Writer's of America analogy, Odd Partners (edited by Anne Perry). That story is called Songbird Blues, it's noir, and there's a movie-type trailer for it below...

I'm thrilled to be in both books!