I lived in Paris too short a while, but it's still vivid. It was a lucky time, for me, even if the ferment and fever of that unquiet age didn't give us much breathing room, the political furies, the war. That spring the French decided to shut their own country down, and late in the summer, the Warsaw Pact dropped a heavy hammer on Prague. The larger world intruded, and I certainly wasn't indifferent, but all the same, I was under a protective enchantment.

I know what Hemingway says. I think he works it too hard, but he's right. Paris is completely magical. We of course bring a great deal with us, all that excess baggage - the Lost Generation the least of it. Be that as it may, you can shed your skin there, you're not confined by previous incarnations. I imagine we all discover our own Paris. I know that isn't a terrifically original observation, but my Paris was my own discovery.

Paris at night is hugely different from Paris during the day, just as Paris in the rain is completely different from Paris in sunshine (think black-and-white as opposed to color, Rififi instead of Gene Kelly, the photographs of Brassai, the streetlights and dive bars). I used to take the Metro down to Notre Dame at two or three in the morning, it surely being the mark of a great capital - New York, Berlin, Paris - that the subways run all night. This is back when Les Halles were still in the middle of town, now it's Place Pompidou, and the wholesale markets are out in the sticks, Les Halles were two enormous metal buildings, like giant Quonset huts, with arched girders inside, forty or fifty feet high at the peak. One was for meats, poultry, fish, the other for produce, flowers, and fruit. The vendors had stalls, and there were cobbled alleys in between. Birds nested in the upper eaves, All the Paris restaurants shopped there. getting an early start. Close by were the bars for the working stiffs, in their blue coveralls, knocking back black coffee and an anisette. I took a lot of pictures, color transparencies but usually black-and-white, Tri-X at 400 ASA, which at the time was fastest film readily available.

Just as often I didn't take a camera at all. Another big difference, between documenting an event, self-consciously a witness, and simply absorbing it. I loved coming into the square below Notre Dame and looking up at it in the dark. I'd been during the day, and climbed it. At night, you felt something else altogether. The face wasn't lit, the rose window was in shadow, the stone was cold.

Time for a black coffee and a Ricard, un petit verre, standing at the zinc bar, scrubbing your hands together for warmth. 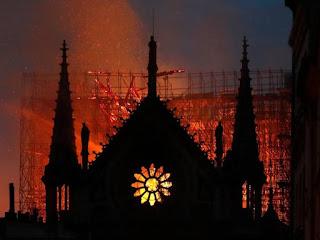 Here's a heartening thing. The bees on the roof outlasted the fire. Rooftop bee-keeping is big in Paris. Notre Dame, l'Opera, the d'Orsay, the Grand Palais. It's a small reward, but reassuring.

How wonderful that you got to experience living in Paris... Thanks for an evocative picture.

The husband went to Paris on a French class trip when he was about 15, around 1974. The chaperone let him leave the group all by himself for the afternoon, to visit his grandmother who lived there. This would never be allowed now. Before the trip he saved his $$ to buy a Ricoh camera, which someone stole from him before he even took the first photo. He did get to see Notre Dame Cathedral & the Louvre. I hope to visit Paris eventually myself & glad you had the chance to live there for a while.

David, some might read your article like an ode, but methinks it's more a love letter to an old flame, pun not intended. Beautiful either way.

When most North Americans visit in Europe, they target Britain or Ireland. Once you live in Europe or spend extensive time, you begin to realize our spiritual hone isn't the British Isles, but France. It's more than just an historical alliance– the wars of 1776, 1822, and the Civil War. It's more than the Statue of Liberty. It's a way of thinking, of feeling, and especially an outlook and sense of the future.

Thanks so much for your firsthand account of seeing the Cathedral! When I heard it was burning I thought it was like what would happen if someone had knocked down one of the pyramids.