"You know that's my ought-six - look at the size of that hole!"
(The Wild Bunch)

There's a longstanding disagreement in gun circles about how much gun you need, which is basically unanswerable. Talking about caliber and magazine capacity, bullet weight and muzzle velocity, is like talking to fly fisherman about lures. Everything's relative, and in the end, it all comes down to whether or not you catch the fish.

The benchmark people generally use is the one-shot stop. In point of fact, a .22 short in the back of the head will kill you, and it's conventional wisdom that mob hitters like it because the .22 short is subsonic, so you can use a suppressor. On the other hand, if we're talking about a person of large body mass charging at us with a sharpened screwdriver in their hand, and possibly whacked out on Angel Dust, many law enforcement personnel would choose the .45 ACP, which has a solid, immediate impact.

More than a few things come into play here, not least adrenaline and endorphins. FBI studies indicate that the average number of rounds fired in a close engagement are two-point-something. Obviously, this means some people empty a full magazine and some people never get a shot off, but for the sake of argument, let's simply say that if you're lucky, you'll have time for two shots. Your range instructor will tell you to aim for center body mass - but he or she won't say 'aim,' they want you to point and shoot, they want you to acquire the modified Weaver with muscle memory, don't second-guess yourself, let the reptile brain lock it in.

The rest is kinetic energy.

In the 1870's, during the Indian Wars, the U.S. Army issue sidearm was the Colt single-action, chambered in .45 Long Colt. These were replaced in 1892 by a double-action revolver, with a swing-out cylinder for the faster reload, in .38 caliber.  In the Philippine Campaign, the .38's proved ineffective, and eventually the Army adopted the .45 ACP autoloader designed by John Browning, the 1911.

Cop shops follow fashion, of course. For many years, everybody carried .38's. Revolvers, usually Smiths or Colts, the Model 10 or the Police Positive. And they shot off-hand, body at right-angles to the target, the shooter's arm fully extended. The two-handed stances, Isosceles and Weaver, were a later development. Same with the ammo. Sometime in the 1960's, the .357 S&W Magnum, developed some years earlier by Elmer Keith, hot-loading the .38 Special, found new favor with state troopers and highway patrol. With a muzzle velocity of 1200 to 1500 feet per second, the .357 readily penetrated an unarmored vehicle.

Then, in the 1980's (and I may not have the dates exactly right - or maybe the shift isn't all that exact, either), a lot of big-city police departments went to semi-autos, Smith, Sig, and Glock. They were primarily high-capacity nine-millimeters: Glock furnished a 17-round magazine. Not everybody was a fan.

One cop I know told me a story. He and his partner had a felony traffic stop. They approach the car on either side. His partner's over by the driver's door. The passenger points a weapon at him. My buddy's taken up position by the right front fender. He draws his gun and fires. And misses, from no more than five feet away. Because the curve of the windshield deflects his first shot. The muzzle velocity of the 9MM is 1500 fps, but the bullet weight is too light. Heavy and slow is more effective.

For all I know, this story is apocryphal, or exaggerated for effect. When cops tell war stories, they tend to tell the self-deprecating ones, where they're the butt of the joke. I think the story's true, though. You hear GI's say similar things about the Beretta nine - it underperforms. You want something that puts the other guy down flat on his ass.

To this end, the FBI cozied up to the 10MM, a pet project of Col. Jeff Cooper, who was also an enormous influence on combat pistol shooting generally (he founded what later became Gunsite). The first pistol chambered for it, the Bren Ten, was essentially a boutique gun, but Colt came out with the Delta Elite, and Smith with the 1076. It turned out the 10MM had too much felt recoil for a lot of shooters. and the grip frame was cumbersome, a consequence of the oversize magazines. (In the event, FBI Hostage Rescue and SWAT teams use the 10MM, but it's a specialty weapon.) Smith & Wesson shortened the cartridge case and came up with the .40 Smith, now one of the most widely used commercial loads in law enforcement.

There is, in all of this, an orphan. Back in the late 1920's, the .38 Super was introduced, a pistol cartridge designed for the recoil-operated 1911 automatic, based on the .38 ACP but loaded to higher pressures. It was hot. It would go through a car, it could penetrate a bulletproof vest. John Dillinger is said to have carried one.

Now, truth be told, I didn't know from the .38 Super, because it had fallen from favor. It got knocked off its perch by the .357 Mag. The first I heard about was when it made a cameo appearance in Stephen Hunter's Black Light - a shoot-out in a cornfield with Bob Lee Swagger's dad, Earl - and it was characterized as a real pistolero's weapon. Come to find out, Steve Hunter hadn't been conversant with the .38 Super, either. He found out about it when he was reading up on The Wild Bunch, and it turns out they couldn't use .45's in the movie, because the 1911 wouldn't cycle .45 blanks. You could only fire one shot. The workaround was that they bought surplus .38 Supers down in Mexico, and the guns ran all day.

I know you're rolling the tape back - why Mexico? Because in Mexico, and a number of other countries in Central and South America, they restrict the heavier pistol calibers to military and police. You can't legally own a .45, for example. (We're not talking about the cartels, we're talking about legal civilian use.) The heaviest chambering allowed is the .38 Super, and there's a big after-market. 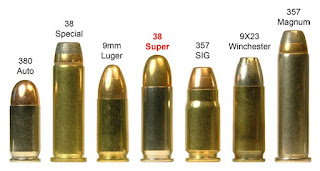 I know much of this is only of interest to gear nuts like me (or Steve Hunter), but it has to do with getting things right, which means knowing what questions to ask. I love picking up odd details, and often as not the collateral information is every bit as interesting as whatever your original focus was. We're magpies, distracted by something glittery in our peripheral vision.

My preference - the .357 magnum revolvers. I shoot more accurately with my S&W model 66.

Good stuff, David. And, as you say, it helps to know what questions to ask.

I'm very unknowledgeable about guns, other than I used to attend parties (down South), where everyone would go out back and drink beer and fire whatever weapons everyone else had brought. Met some interesting weapons there, and what I learned was
(1) a 120-pound woman (my weight at the time) will get kicked backwards a few feet by certain types.
(2) I was damn accurate with an AR-15.
(3) A shotgun is still a damn fine weapon against a person of large body mass charging at us with a sharpened screwdriver in their hand, and possibly whacked out on Angel Dust. For us lightweight types, aim for the knees, because the kick will carry it up to the body.

O'Neil - I might not have this exactly right, but the story I was told is that there was a hellacious gunfight back in the late 60's or early 70's, where so much ammo was expended people had to borrow from each other, and of course .38 will chamber in a .357, but not the other way around, and it led to standardized issue: back in the day you were responsible for buying your own duty weapon. (This might be urban myth.)

Well done! Tightly written but loaded with information here. I'll be re-reading this many times for research. Thanks David!

A friend, who knows some unusual people, told me a little anecdote about someone she knows who prefers to use a .22. He allegedly said, "I don't want to kill anybody, I just like to watch them dance a little bit."

Yes, we bought our own weapons, including the .9 mm I bought in 2006. It was not until @2015 did our agency issue 40 calibers. Only then did we all carry the same weapon and same ammunition. We had department issued shotguns in our police cars. Each department has its own rules and regulations.

I agree, David, getting things right is important.

I've gathered a variety of opinions over the years. When I was a kid, hunters tended to be tacitly contemptuous of overarmed city hunters, the kind that use a deer rifle to bring down a bunny, and an elephant gun to bring down a deer. In particular, .22s are surgical, soft-nose .45s are for utter destruction.

Shotguns particularly disgusted my father. Years later, both European and domestic police comment that fully automatic weapons are designed for people who don't know how to hit a target.

David, the hellacious gunfight you mentioned isn't mere urban myth, which ranged across a swath of the city. I vaguely remember watching it, perhaps somewhere in California. Some of the news camera positions above the bad guys would have made great angles for police snipers.

The bad guys were heavily armed and heavily armored, which prompted politicians to seek military-grade weapons for civilian deployment. I don't know about borrowing, but officers entered gun shops, requisitioning shelves of ammunition.

Yes, essentially a sack that is hung up to catch ejected casings.