Questions, I Get Questions

I've known SJ for close to thirty years. I had read her first published short story with Lydia Chin and Bill Smith in a little magazine, the name escapes me now. PI Magazine, maybe? Then her first book came along and I was blown away again. She not only writes a Lydia Chin book, then a Bill Smith book, she also writes stand-alone thrillers. Her books are as different as Lydia and Bill are, yet you know when you pick one up you are likely going to stay up all night reading.


Questions, I Get Questions

I have a book coming out this summer.

People – non-writers and new writers alike – tend to assume two things at once. The first is, as someone once put it to me in the form of a question, "Do you figure everything out in advance, or do you sit down and it just flows?" Er, neither.

I don't outline, except in the vaguest of terms. In SHANGHAI MOON, for example, I knew what and where the jewel was, and that the situation went back to the Jewish Ghetto in Shanghai during World War II. Those two things were the foundation of my interest in creating the world of SHANGHAI MOON. What I didn't know was the nature of the person who had the jewel, or anything else about the actual story that became, in the end, the book. I had to write the book to find all that out.

On the other hand, it certainly doesn't just flow. Oh, no, it doesn't. My process – and I believe this is true for many, many writers – is start-and-stop. When E.L. Doctorow famously said that when you're driving at night you can only see to the end of your headlights but you can get all the way across the country that way, he didn't mention how sometimes in a heavy fog you can't see anything at all and you have to stop and wait for it to clear. Or that you can take a totally wrong turn and find yourself at the edge of the swamp, and then you have to U-turn and go look for the road again.

But that's me: I'm a headlights-at-night writer. The way I deal with it is to have something in mind – say, the truth about the jewel, and what that means to the people around it – that glows through the fog and the dark like a neon sign up ahead. I aim for it.

The second thing non-and new writers tend to assume that it gets easier. Come on, the book I'm working on now is my 17th. It's called Paper Son, and it's in my Lydia Chin/Bill Smith series, of which it's the 12th, and though the publisher Pegasus Books, is new to me, I've worked with four previous publishers, so even this new-publisher thing is something I'm having to get used to. Each book is as hard as the first one. You just have to work through it. 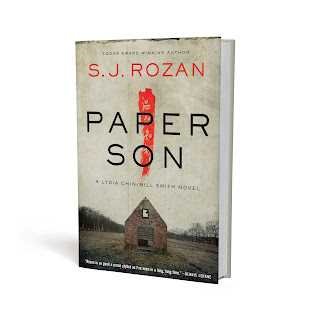 Think of it this way: if you insist, as I do, upon driving across the country at night again and again, why would any trip be easier than the one before it? There's still the fog. There are still the wrong turns and the swamps. There's still each mile to be covered, no shortcuts – the distance doesn't change, nor the hills nor the blizzards, just because you've done it before.

But here's what has happened: I've learned not to panic. As bad as the weather, the road, or the wrong turn is, I've made this trip before. I can't get in any trouble I haven't been in already, lions and tigers and bears oh my, and somehow I've always managed to get out. Whatever the wall I've just hit (and in fact I've hit more than one in this book) there's a way over, around, or under it – or it'll dissolve when the fog lifts. That's what I've learned, and it's the most encouragement I can offer new writers: There's always a way. You just have to find it.
Posted by mystery guest at 00:30