A month ago, I blogged here about the agonizing decision I faced: What to write next? And you know what? I'm still agonizing.

My new book is out, I don't owe a publisher another one, and I haven't promised anyone a short story or script. I'm totally free. And I'm totally paralyzed.

Well, not totally paralyzed. I am capable of making up my mind. The problem: I'm too capable. I make up my mind what to write every three days. Which moots whatever decision I made three days before. I'm like the Flash playing tennis with himself, batting the "What to do?" ball back and forth until it's a scrap of ragged rubber and there's a flaming trench worn into the asphalt.

The closest I come to writer's block, I think, is the twenty or thirty minutes I stare blankly at the screen, motionless except for the occasional slurp of coffee, when I'm trying to get my brain in gear and start a blog post. I already went through that this morning before I began writing this and, man, did it suck.

Some writers actually experience that excruciating paralysis for weeks? Months? Years? No wonder we have a reputation for emotional stability and clean living. Or not.

Actually, people don't tend to think of writers as mercurial drunks anymore. The reason: Most people don't think about writers at all. We're like Santa's elves -- the behind-the-scenes suppliers of fun and magic -- except even more overlooked. Like if Santa's elves had elves. The kind who never even get to sit on a shelf because they're not allowed out of the workshop basement.

Wait...why do we do this to ourselves?

If only writing a story were as easy as declaring "end of story." "It was a dark and stormy night," you type. "End of story." And then two months later a check for $500 shows up in your mailbox. Unfortunately, it requires a bit more work than that. The first step, as established above: deciding what the hell you're gonna write about. Which is usually kind of exciting but sometimes feels like slow-roasting your brain with an apple cider reduction and farmer's hash. 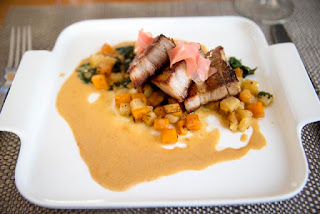 Looks like the kind of thing Hannibal Lecter would enjoy with a nice chianti, doesn't it? Me, I'm tempted to serve it with something a little stronger.

Come back in thirty days for my next column, when I'll either announce that I've finally decided (definitively!) which idea to turn into a book or that I'm checking into the Betty Ford Clinic.