Ever painted yourself into a corner? Writers obviously set targets, like a page count or a due date, or decide on a specific setting or circumstance, maybe a card game, or Elizabethan London, or a child's narrative POV - and then of course we move the goalposts. I'm thinking more particularly of stepping into a snare of your own devising, creating a problem you didn't know you had.

Writing's an obstacle course. And one of the things you learn early on is that you can't leave stuff out, you can't skip something because you think nobody will notice. This is obvious if we're talking about forensic detail, say, but less so when it requires us to bring more to the game. We all play to our strengths, and have lazy habits of mind, or avoidance mechanisms. It's about the comfort zone.

For example. I first blocked out my spy story "Cover of Darkness" a very long time before the end result saw print. We're talking years. Partly, it was cold feet. I wasn't even entirely sure I wanted to write about the Cold War, and my time in Berlin, and I had a handy alibi, because I knew I was crossing the line between inside information and actual classified material. But the real stumbling block was my own skill level. The set-up for the story - the rainy tarmac, the stuffy car, the security, the briefing - was all very fluent. The  problem was, once the story really starts, once McElroy makes the dive into the icy river, everything takes place underwater. It was claustrophobic, there was no dialogue, it was all physical description. I broke it up a little, of necessity, but the basic story is one long action scene. It was a toughie.

Another story, "Winter Kill," stopped me a third of the way in, because I'd written myself into an impossible box. I had a murder victim, a cold case, skeletal remains, but no ID on the victim. How do you pin it on somebody? Doyle claimed that the Holmes stories were written back to front, he knew going in what Holmes would deduce, so it was a matter of reversing the plot. In my case, I don't think I've ever known going in how a story would turn out. The work-around, in "Winter Kill," is that I blinked. I realized it couldn't be made to happen, and I came up with a way to narrow the possibilities, and put a history to the bones. In other words, I fudged it.

I've talked before about the sex scene in my novella Viper. This is an example where there wasn't any work-around. I put my head in the lion's mouth. I hadn't planned it that way, by any means, but as the story took on shape and momentum, the inevitability loomed. And it had to be full-frontal, it couldn't happen off-stage. I've speculated previously that I did this accidentally on purpose, just to see if I could navigate the rapids.

I'm wrapping a Benny Salvador story now called "Second Sight," and I've hit a snag right at the end. The question isn't what happened, but how to explain it - more exactly, how not to explain it, how to paper over the details because the truth will do more injury than a comforting lie. There's the moral issue involved, Benny being pretty much a straight arrow, and a part of him knows he owes an honest account, but the lie will own him. And then we have the actual mechanics. How do I manage this convincingly?

This last is a different kind of obstacle from the ones I've outlined above, and of course that's the point, that each of them presents a new, and individual, difficulty. The specific, not the generic. I'm perfectly ready to entertain the notion that we're testing ourselves, pushing the boundaries, raising the bar. That it's a contest, or even a contact sport, hand-to-hand combat, wrestling an intransigent syntax to a weary draw. Or is it simply the quiet satisfaction of getting it right? No. There's more to it than that. There's that place we all know, where you get to say it out loud. Gotcha, you bastard. 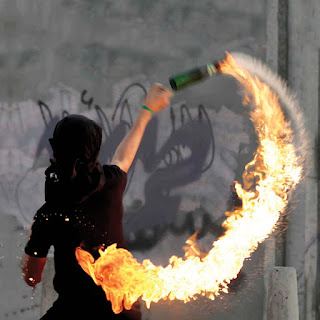 Oh, yeah. I'm in a corner right now myself - but I'm gonna write my way out of it, no matter what. Thanks for letting me know I'm not alone!

Years ago I wrote a short story that used a young girl as the narrator, and the whole story depended upon her not understanding the significance of what she was telling. That meant I had to leave one detail out of the story. It still worked, but I've had a few people ask me which of two solutions is true. Either one works, so it's not a real problem.

I also spent lots of time researching psychological details for a book the was originally going to be the third or fourth Woody Guthrie novel. I developed an outline, but by then it was clear it would work better as a Trash & Byrne book. When I finally started writing, I realize that two pieces of research actually nullified two different parts of my premise. The OCD killer wouldn't have come up with such an elaborate plan because there was a much easier way to get the same result. That destroyed the whole point of the book. I was able to recycle some of the minor characters into another story, but that original idea is still on a flash drive and I don't think I'll ever be able to use it.

Writing yourself out of a corner. Oh, yes. Been there. You are correct "Writing's an obstacle course." Sometimes it feels like the US Army infiltration course we ran with live ammo in preparation of going to die in Vietnam. If writing was easy, everyone would do it. Wait. Everyone is doing it. The older I get, it seems the less I know. Good posting.

Yeah, it always makes me feel good whenever I figure out how to write my way out of a corner. I figure I taught myself something, even if it turns out to be something I can't actually use at that particular time. Years ago I collaborated on a nonfiction book that we never finished because my co-author died. I had to write a sex scene between two people who were related. Of course it was yucky, but it taught me a little about writing sex scenes.

Been there, as they say, done that.

I've sometimes wished someone would invent a 1st to 3rd (and back again) person translator. I've sometimes going back months later and found the wrong pronoun, overlooked when I rewrote it. My brain seems to recognize the original text and removes it from the critical eye.