Social Issues in Crime Fiction, and a Farewell


I agree with Mr Lehane and it is one of the reasons I chose crime fiction as the method to tell my stories. That and realizing that I wasn't finding stories about my family or the people I knew in "literary" fiction, except on rare occasions. I don't think you can write about crime without staking your position on many social issues. Even if you don't comment on them directly, you are affirming the status quo in one way or another--stating that "all is well" or "what ya gonna do, that's the way things are." Even the definition of crime is a social issue statement. At Bouchercon, I attended the criminals in fiction panel, and during the Q&A I asked, "How do you define a criminal?"

I asked the question because first of all, actual questions are rare at any writer panel. Most of the time they are manifestos or statements twisted into the form of a question, such as "the unpublished novel about my pet squirrel's ghost solving crimes would be bigger than The DaVinci Code, don't you agree?" So I wanted to give the writers something to chew on, but unfortunately I didn't get any good answers.

One writer used the legal definition, which means anyone never charged with a crime--either because they eluded police or their status and privilege acted as a Get Out of Jail Free card--isn't a "criminal." Which makes no sense at all. Jack the Ripper isn't a criminal, he was never caught. Is someone who is pardoned a criminal? Are you a criminal for life if you've done your time, but an upstanding citizen if you've been acquitted because your victims signed NDAs or disappeared? Our heroic protagonists often break dozens of laws, but they're okay. The most popular genre today, superheroes, act as vigilantes, above the law either by government sanction or their own moral code, and we cheer them on. They are criminals. 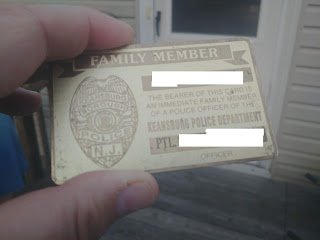 As for Get Out of Jail Free cards, police unions give out paper or gold cards to their members to give to friends and family for preferential treatment, and badges to put on windshields to avoid traffic stops, so I guess anyone who's good friends with an American police officer is unlikely to be a criminal by the legal definition, "just don't kill anybody," one recipient was told. We permit this and think it won't lead to abuse. I'm sure the strict moral codes of all involved come into play.

People from the "underbelly of society" as Lehane calls it don't get these too often, they are the hidden tax base that American municipalities leech for revenue, keeping them in a cycle of probation to give jobs to our bloated drug-war-fueled criminal injustice system, but whenever I read about corruption it's about a few "bad apples" like the guys in Don Winslow's The Force. We always forget the other half of that adage: they spoil the whole bunch. I know that's sacrilege these days, saying that our warrior caste of Heroes are complicit in a corrupt system and anyone who says "I hate bad cops! They make my job harder!" but can't produce a list of cops they got jailed for corruption is helping rot the barrel, but yes, that's what I'm saying. And when we write stories about police that ignore that unarmed black men are shot in their homes and turned into criminals, that prosecutors withhold evidence to make their cases, that judges take kickbacks to send kids to private prisons, we are the bad apples, too. Oh, that's unpleasant? That can't be entertainment? The fantasy section is over there.

Am I without sin? Hardly. I've been that cowardly guy who chuckled nervously when a man with power over me said something terrible about women and confessed to mistreating them. It's the same thing. We perpetuate it. It's our problem, not women's. I've tried to do better. I've helped train police to constrain violent people without having to shoot them, tase them, or choke them to death for selling cigarettes. I've tried to write that whether you wear blue uniforms or prison sweatpants, that you are human and have your reasons for what you do, whether those reasons are for the greater good or for personal gain, and make it entertaining in the process. They are not mutually exclusive. If you think they are, take it up with Lehane, Hammett, Hughes, Himes, Chandler, Paretsky, Mosley, and Block--who gave us openly corrupt cops in both Scudder and his cozy Burglar series.

The young bloods in crime fiction are not shoving "social issues" down your throat. It has been the crux since Hammett "took murder out of the Venetian vase and dropped it into the alley," as Chandler said. Even cozies today take on social issues. It is in crime fiction's DNA. Maybe we don't quote scripture, maybe we prefer Lil Wayne. He's sold 100 million albums, do you know who he is? Big as George Harrison (RIP, my favorite of the fab four). If you think "kids today" are stupid when they are the most active young generation in politics since the late '60s because you saw some edited crap on the Jay Leno show, my suggestion is to get out more. Take your head out of the Venetian vase and put it on the streets.

Thanks for listening to this rant. It will be my last for SleuthSayers. Thank you to Robert and Leigh for letting me speak here, and for all of you for reading and commenting. Fare well.
Posted by Thomas Pluck at 00:00