by O'Neil De Noux
The subject of the latest MYSTERY READER'S JOURNAL, the Journal of Mystery Readers International (Vol 34, No 2, Summer 2018) is SPIES AND SECRET AGENTS. It features articles by a number of writers, including me. I thought I'd share the gist of my article here on SleuthSayers.

When I realized I would never play centerfield for the New York Yankees (too small, too slow, no athletic ability) I turned to books and decided I'd be a south seas adventurer or maybe an archaeologist. Then I stumbled across Ian Fleming, Len Deighton, John Le Carré, Adam Hall and others, which began a life-long fascination with secret agents. I wanted to be one. That did not turn out for me either. Ever hear of a 5'6" leading-man secret agent? I'm not cool or suave, not multilingual. Hell, I'm barely lingual. 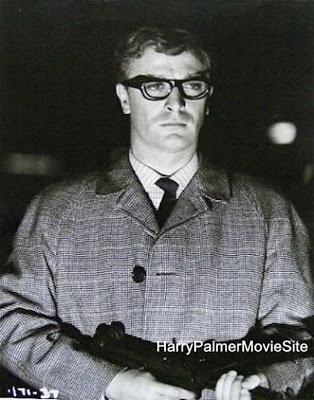 I became a police officer instead, an intelligence analyst and a homicide detective before becoming a private investigator. Along the way I found my true calling to be a writer. I wrote about what I knew – police and private eye stories before penning historical novels (I have a history degree).

The secret agent lingered in my mind, tapping my shoulder, asking when it would his turn. So, I created two secret agents and gave them a little help – superhuman powers – and let them loose in 1936, in a world on the brink of war.

So far I've had two novels published in the series:

LUCIFER'S TIGER (Big Kiss Productions 2017) introduces American agent Lucifer LeRoux in search of a mysterious stone only to run into a group of trigger-happy Japanese and Nazi agents and an alluring brunette who needs rescuing. Or does she? The audacious brunette is Catrin Allaway and like Luce, she has hidden powers and the chase in on as Japanese spies and German thugs pursue the American secret agents. Against a backdrop of exotic locales – from a giant casino in Macao, aboard ship through the South China Sea and the Strait of Malacca into the Bay of Bengal to India and to the Arabian Sea to battle Nazi SS troops and evil scientists. Enmeshed in a struggle between good and evil, the two Americans are drawn to one another on a lush, tropical island. What diabolical plan do Nazi scientists have for tigers? The perilous adventure becomes a dangerous game of cat-and-mouse in the realm of the ultimate predator – the tiger. 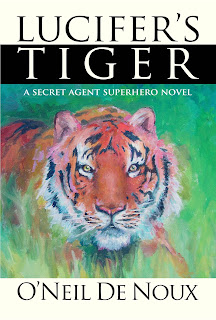 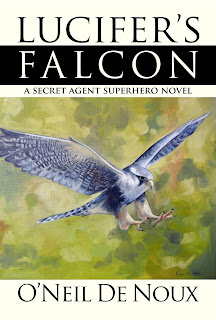 LUCIFER'S FALCON (Big Kiss Productions 2018). It is still 1936 and newlyweds Luce and Catrin are on a mission to rescue two men from two European castles. From the coast of Spain to the French Riviera to a high castle in snowy Bavaria, the American agents tangle with Spanish fascists, Nazi fanatics and monstrous men with superhuman powers. Can Catrin and Luce pull off the rescues and make it out alive to continue their honeymoon? With the unexpected aid of a rapacious falcon, they just may get out alive.

In creating these larger-than-life secret agents, I made them Advanced Humans whose ancestors evolved differently than regular people. It also gave me the opportunity to create superhuman villians. It is great fun to write and for a little while, I get to be a secret agent.

I'll save y'all the trouble. I know I'm a mess. My writing's all over the place. My brain just works that way.

That's it for now.