by Robert Lopresti
Two weeks ago I wrote about visiting New Orleans.  This time I am going to explain why I was there.  The American Library Association holds its annual conference in late June and this year it was in the Big Easy.

Truth to tell, the main reason I went was that the Government Documents Round Table of ALA was giving me the Lane/Saunders Memorial Research Award for When Women Didn't Count.  But I went to a bunch of professional meetings too.

I am not going to tell you what I learned about the current research on reference work and the shocking changes in Canadian government information trends (email me if you are dying to know), but will stick to things more relevant to SleuthSayers.

Believe it or not, there was a panel of mystery writers, and none of them were librarians.  Here's what I remember about them:

Robert Olen Butler is a Pulitzer Prize winning writer and a collector of old postcards.  The latter is relevant because he wrote a book called Had A Good Time, in which each story was inspired by a postcard, and told in the voice of the person who wrote the message.

The great editor Otto Penzler read the book and promptly offered him a contract for two mysteries about one of those characters, an early twentieth century reporter named Christopher Marlowe Cobb.

"Being of a literary turn of mind, I believe my exact words were 'Oh boy, you betcha!'"  There are four books in the series so far.

Ellen Byron writes "Cajun country mysteries," complete with recipes.  She
says she is so afraid of writing sex scenes that she won't even read the book on how to write sex scenes.

"I have a scar on my forehead where I walked into a tree because I was reading.  I was 25 at the time."


Jude Deveraux  has written dozens of popular romances but her new agent wanted her to try something different.  He proposed vampires or zombies; she countered with mysteries. He asked for outlines for three books; she replied with nine outlines, one of them 20,000 words long.  (That's not an outline; that's a novella.)

Debra LeBlanc writes horror - see her many books with Witch in the title -  but her Nonie Broussard novels are about an amateur sleuth who gets (annoying) help from the occasional ghost.

"I am to literature what Walmart is to department stores." 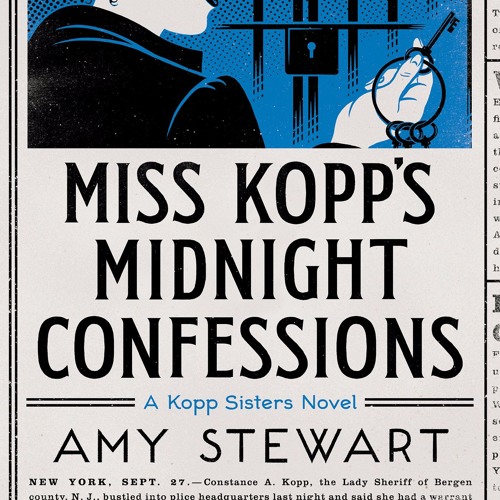 Amy Stewart has written several quirky nonfiction books.  While researching The Drunken Botanist, about the blessed plants that give us booze, she stumbled on the true story of the Kopp sisters who, in 1915, got into a feud with a drunken mill owner in Paterson, New Jersey.  The eldest, Constance Kopp, became the first female deputy in the state.  All four novels are based on her actual adventures.  The title of the first, Girl Waits With Gun, was an actual newspaper headline.  I can testify the book is a lot of fun.

"My characters are all six feet underground.  I'm like, 'Could y'all wake up for five minutes?  I've got some questions.'" 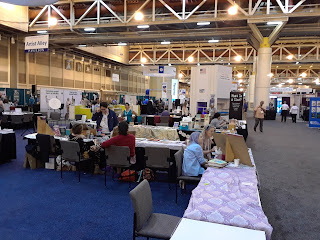 But there are more reasons to attend ALA than the panels, wonderful as they are.  Above you see a picture of the exhibitor's room.  There is no way I could capture more than a sliver of this joint, which had roughly 700 vendors in it.  That included everything from an author with a card table hawking a single title, to most of the major American publishers with displays the size of a grocery store aisle, to companies trying to sell computer systems, furniture, etc.

It is stunning and bewildering.

One company brought in an espresso cart and had a professional barista mixing up free lattes for the crowd.  "I like Baker and Taylor a lot more than I did an hour ago," said one happy imbiber. 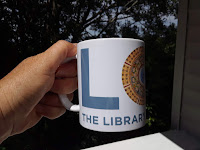 Oh, one big exhibitor was the Library of Congress.  Besides giving away coffee cups they had had an hour when you could have your picture taken with Carla Hayden, the Librarian of Congress.  Dr. Hayden is triply unique being 1) the first female, 2) the first African-American, and 3) the first librarian to hold the office.  There was a very long line so I passed up the opportunity for the pic.

Now, I have a crazy suggestion.  If the ALA conference is ever held near you, you might want to attend.  (Midwinter will be held in Seattle this January.  The bigger summer conference will be in Washington, D.C. in June.) No, I'm not suggesting you shell out hundreds of bucks to attend panels on cataloging and the learning commons.  But for a lot less ($75 in New Orleans) you can get access to the exhibitor's hall.  And the seven book covers you see here?  They are advance reader copies I picked up for free.  They are just the mysteries; we took home at least as many other titles of different types.  The only limits were our interests and what we wanted to ship them home.

Speaking of which, the photo below shows the post office branch in the exhibitor's hall where librarians were packing up swag to mail home.  We shipped home two boxes.  How many  advance copies would you consider worth the entrance fee?

Enough talk.  I have books to read. 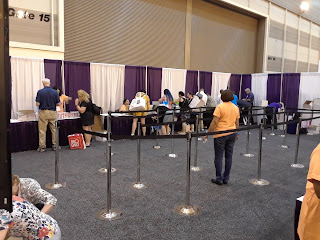