In June my wife and I visited New Orleans for the first time.  It was great fun and quite a change from  my Northwest home where we were still celebrating what we call Juneuary.  (As I write this it is Febjuly.  The temperature is 64 degrees and it is drizzling.)

One of the highlights was meeting O'Neil De Noux in person for the first time after years of digital friendship.  O'Neil was kind enough to take us on a tour of the city where his family has lived for hundreds of years.  Boy, was that great.  He is quite a raconteur.

But here was the best part.  O'Neil stopped the car in front of one building and announced that this is where Lucien Caye had his office.  Caye is one of O'Neil's series characters, a post-war private eye. 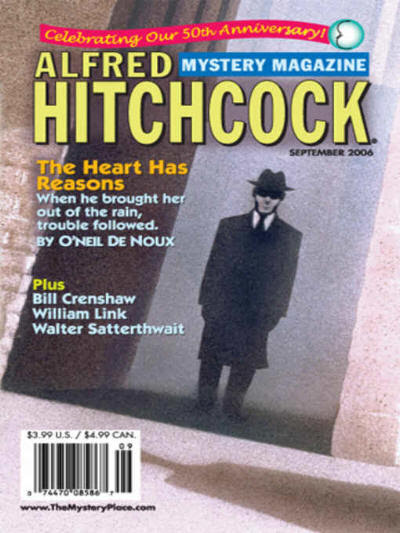 Just beyond the building there is a park and I immediately remembered the beginning of O'Neil's Shamus-winning short story "The Heart Has Reasons."  Lucien Caye looks out his window and spots a girl sitting in the park.  And that was the  park.

I actually shivered.  It is weird how fiction can do that to us.  It explains why fans have put up marking locations of Baker Street, West 35th Street, and the Reichenbach Falls.

Several friends assured us that the best thing about New Orleans was the music so when my wife and I had a free  evening we decided to see what was on offer.  I'm not a big fan of jazz or Cajun (sorry) but there was one performer listed as folk.  Through the miracle of Youtube we were able to check her out and I would say she was more Bonnie Raitt than folk, but that was fine.

So we strolled over to the French Quarter to the bar where she was playing.  There was nobody and nothing on the stage.  Not so much as a piccolo.  We were greeted by a man at the end of the bar who appeared to be the owner.

"When is the music supposed to start?" I asked.

So we strolled about the Quarter for half an hour.  No sacrifice, I assure you.  Coming back at 9 PM we found the stage was still empty.

I looked up the singer's Facebook page and found a notice to her fans that the gig had been cancelled.  I showed it to the apparent-bar-owner who was quite astonished by the news.

So, on the whole, I was not that impressed by the music in New Orleans.

I have to get serious now.  That weekend was the 45th anniversary of a famous crime in the city: the UpStairs Lounge arson.  A gay bar was burned and thirty-two people died horribly.  While no one was ever convicted, it is considered pretty certain the culprit was a gay man who had been thrown out of the bar earlier.  (He killed himself a year later.)

A tragedy without doubt.  But the main reason it might be of interest today to those who knew no one involved was the response.  The news media generally ignored that it was a gay bar.  Radio shows made jokes about it.  No government officials mentioned the death of thirty-two citizens.

Many churches refused to hold funerals for the victims.  One Episcopal priest did and was criticized by his parishioners and bishop.  (Unitarians and Methodists stepped up too.  More power to 'em.)  Some families never claimed their deceased's remains.

If there is a positive side to that story it is comparing it to how the nation reacted to the Pulse massacre of 2016.  Looks like we had matured a little since then.

I haven't mentioned the actual reason we were in New Orleans, which was the American Library Association conference.  That's the topic for next time.