Being a slim-ish (off and on) white dude (always) with a mild disposition (usually) and a closet full of cardigans, I've been compared to Mr. Rogers more than once over the years. Even in my early twenties, when I picked up the cardigan habit thanks to a frayed maroon sweater inherited from my grandfather, I didn't take this as an insult. My mom likes to tell the story of my older brother's reaction to the first episode of Mister Rogers' Neighborhood as a 3-year-old -- he turned to her at the end and said, "He's a nice man" -- and I always felt the same way about the guy after I came along. He was a nice man, and Princess Leia and I are simpatico on them.

As an American dude, though, I didn't always get the feeling I was supposed to like nice men. Nice guys finish last, remember, and the guys who came in first, the culture sometimes seemed to say, where macho hard-asses. Your football players, your professional wrestlers, your no-nonsense businessmen, your posturing politicians, your tough-talking pundits, your action heroes, your Mike Hammers, your Batmans.

All the same, I tried to Han Solo it.

And like Han, I can't always pull it off. For him, being "nice men" is tough because he's actually a lovable scoundrel (and, let us not forget, a scruffy-looking nerf herder). For me it can be tricky because even though I have Fred Rogers in my heart I have Larry David in my head. As much as I try to do the right thing, like the anti-hero of Curb Your Enthusiasm I often put myself on that road good intentions are known for because I'm paranoid I've done something very, very wrong. At least once a month I find myself giving some exchange on Facebook or Twitter the patented Larry David Look because I can't quite tell if I was rude, someone was rude to me or everything's hunky dory.

And sometimes it's not paranoia. As a writer, I agonize over every word. But that's not an option when you're dealing with people who aren't figments of your imagination. In the real world, everything that pops out of your mouth is a first draft you had to write on the fly. Many, many, many times I've wished I could go back and edit something I said -- give it a polish so it's not so, you know, stupid -- but c'est la vie. Or c'est my la vie anyway. Hopefully yours doesn't feel so fraught.

What would Mr. Rogers have to say about all these neuroses? "It's alright," probably. "I like you just the way you are." Or maybe "Meow meow chill out, man, meow meow" (if he had his Daniel Tiger puppet with him). He'd keep it positive, in other words. No matter what.

I think that's why Mr. Rogers is having a bit of a cultural moment. There's a new documentary about him, for one thing, but even before that came along I was seeing him pop up in my Facebook feed at least once a day. If it wasn't the clip of him testifying before Congress it was a meme about him suing the KKK or meeting Koko the gorilla (a big fan -- literally). Forget Joe DiMaggio. Where have you gone, Fred Rogers? Our nation is turning its lonely eyes to you. Woo woo woo.

Like painter/zen master/squirrel enthusiast Bob Ross, who had his own moment a couple years ago, Mr. Rogers represents a gentleness, kindness and all-around goodness that seems so rare these days -- so diametrically opposed to the current zeitgeist -- it's practically revolutionary. And "Viva la revolucion!" I say. I know the moment will pass, but in my own small, flawed way, I hope I can help it last just a little bit longer.

Now if you'll excuse me, I have to go finish my latest book about theft, blackmail and murder. 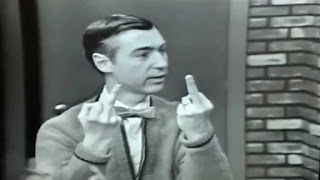