The President Is Missing


by John Floyd
No, this isn't a newsflash--Trump's still there. This is just a quick review, of sorts, of the recent novel by James Patterson and Bill Clinton, called The President Is Missing. By the way, never doubt the power of name recognition: I probably would never have bought and read this book otherwise.

Surprisingly, though, I enjoyed it. If you're willing to overlook the (expected) moralizing, I think you might find it to be an interesting--and sometimes thrilling--thriller. It has all the suspense of a typical Patterson novel, plus some insider facts about the White House, congressional dealings, and the Secret Service that I suspect came from the former President. 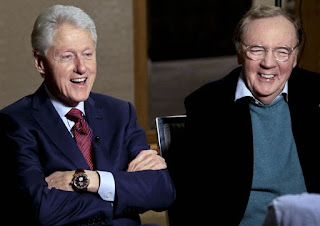 A confession, here: I like Bill Clinton, despite his faults, and I truly like James Patterson (he once said kind things about one of my stories, so he'll always be a saint, in my view)--and I'm sure my fascination with the co-authors helped me like this book. But I honestly do feel that there's plenty to enjoy about it, for almost anyone who likes a fast-moving, hi-tech, plot-twisty novel.

Some quick facts. The protagonist in TPIM is the current president, Jonathan Lincoln Duncan (he seems loosely based on Clinton--surprise, surprise), who discovers a cyberattack plot to cripple the United States, to the degree that all records and files on all computers everywhere, even personal phones and tablets, would be infected with a virus and permanently deleted. This would be an unprecedented disaster, shutting down the health-care system, finance, transportation, Social Security, welfare, every level of infrastructure, and so forth. Anyhow, the President leaps into action to save the nation. He doesn't actually "go missing," or at least not for long--much of the story, after all, is told in his POV--but he does go off the public grid to the extent that he sneaks away from most of his Secret Service guards and is dodging explosions and terrorist bullets by the time the reader can get properly settled into his easy chair. (Unlike Bill Clinton, President Duncan did serve in the military; in this aspect he reminded me more of John McCain--a war hero and former POW.) 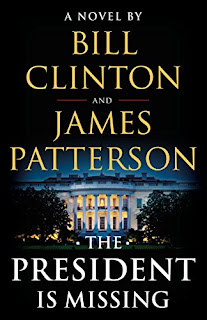 I won't give anything away here, but there's plenty of conflict, both external and internal. The plot includes gunfights, professional assassins, political posturing and turf battles, right vs. wrong soulsearching, and cyberterrorism galore. POTUS even has a rare blood disorder that threatens to kill him before the bad guys do. And--since you might be wondering--yes, there's a mystery featured in the plot: one of the Prez's inner circle at the White House is a traitor whose identity is revealed only at the very end.

Part of my reason for reading this was curiosity, and for Patterson fans, there are plenty of hints that he's steering the ship. Most of the chapters are short, many of them no more than two pages, and there's nonstop action with a lot of plot reversals throughout. The only real drawback I found to this novel was the fact that the entire final chapter was a preachy speech about what makes America great. Overall, though, I liked the book and would recommend it. Even at 500 pages, it's a fast and entertaining read.

How about you guys? Anybody else read this novel yet? If so, what are your thoughts? Are you Patterson fans, or not? Did you think this was up to his usual standards?

The President Is Missing is available everywhere, I suppose, and can be found on Amazon here.

Now I'm waiting for the novel by Trump and Putin . . .