by Eve Fisher
I just heard that Paul Giamatti, Paul Rudd, and Jeff Daniels are all joining in a movie about Moe Berg (1902-1972), professional baseball player. He played pro for 15 seasons (1923-1939), mostly as a backup catcher. But he was called "the brainiest guy in baseball," and I can see why.  An Ivy League graduate, attorney, and baseball player who spoke nine language?  Well, of COURSE he would be a prime candidate for a spy with the OSS. 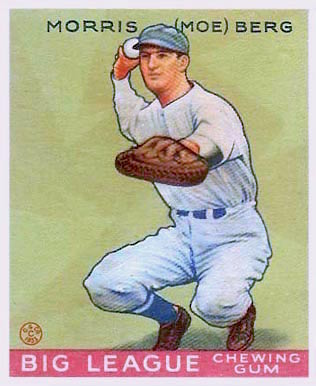 Berg began his work in 1934, when he was touring Japan with the American All-Star team. In 1943, he parachuted into occupied Yugoslavia to determine which of the resistance groups was the strongest.  (He decided for Tito, and he was right.)   He was also sent around Europe in the 1940's to collect intelligence on Germany’s efforts to build an atom bomb. If he believed the Germans were close to developing nuclear weapons, he had orders to shoot the lead physicist, Werner Heisenberg. He decided they weren't. He was awarded the Medal of Freedom in 1945, but declined.

Things changed, though.  In the early 50's he worked for the CIA, very briefly, because they quickly decided he was "flaky". For the next 20 years, he lived with his brother, Samuel, reading and snarking and unemployed. Sam evicted him, and he lived with his sister Ethel in Belleville, New Jersey until he died.


There's a long list of unlikely spies, if you think of spies as being a specific, separate job, as in a Le Carré novel or Ian Fleming novel.  But the truth is, writers (including Le Carré and Fleming) and entertainers have been the first choice to hire for years.

The first recorded one is Thessalus, a tragic actor in Hellenistic Greece, who accompanied Alexander the Great on the long expedition to conquer the Persian empire (and, as far as Alexander could, the world). He served as an envoy (and probable spy) for Alexander to Pixodarus of Caria (southwestern Anatolia, current day Turkey) in 336 BCE. 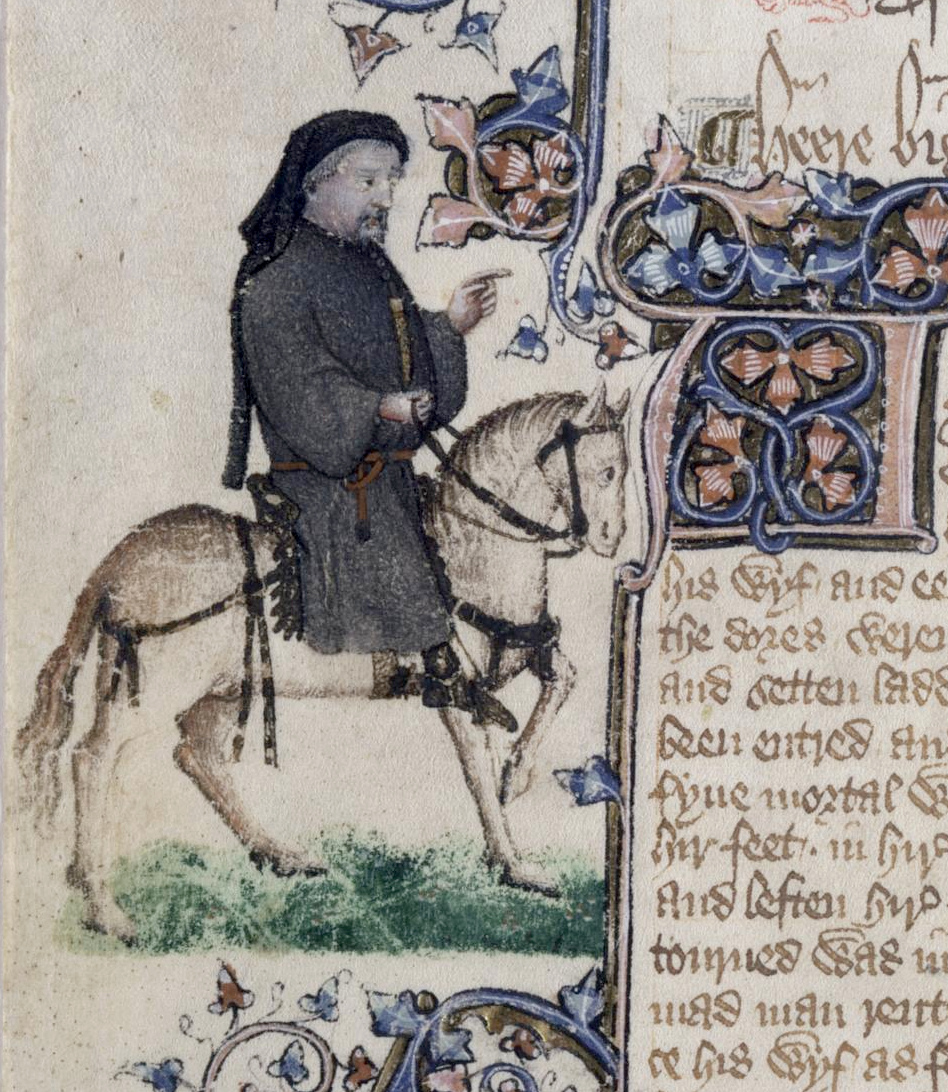 Geoffrey Chaucer was another one.  He has a surprisingly well-documented life for the medieval son of a vintner.  Let's put it this way:  vintners were simply wealthy peasants in the view of the aristocracy.  And being a poet - well, anonymity was the order of the day for artists of all kinds.

But somehow, Chaucer got placed a page in the house of the Countess of Ulster.  He married Philippa de Roet, the sister of John of Gaunt's 30 year mistress Katherine Swynford, who eventually (through what many people of the day believed had to be either witchcraft or a miracle of God) became John of Gaunt's third wife.  In other words, Chaucer had connections:  and besides becoming one of the great poets of the English language, he became a courtier, diplomat, soldier, lawyer, and civil servant.  And spy.

He spent a tremendous amount of his life traveling on either King Edward III or Richard II or John of Gaunt's shilling:  France, Spain, and Flanders, the Italian states, perhaps in pursuit of a princess for the young Richard to marry; and/or to negotiate peace; and/or to borrow money from the Visconti and/or Sir John Hawkwood in Milan; and/or for who knows what?  We're all guessing when it comes to what medieval potentates (or modern potentates) really wanted.  (For a great study of the actualities and possibilities of Chaucer's role as diplomat and spy, read Monty Python alum and medieval scholar Terry Jones' Who Murdered Chaucer?  Mesmerizing.)

Some other writers are more surprising.  Graham Greene, John Le Carré and Ian Fleming make sense, because they all worked for British intelligence at one point or another.  But Roald Dahl?  Julia Child?  Harry Houdini?

Both Scotland Yard and the American Secret Service used Houdini's escape artistry for their own ends.  Houdini was notorious for going into police stations around the world - including Russia (hint, hint) - where he insisted on being locked up so that he could prove he was the greatest escape artist in the world!  The locals were wowed!  He did it again!  And he left town with his reputation intact (he always escaped), and a lot of information.  (No, I don't know what kind.)

Roald Dahl was a three time Edgar Award winner, who wrote the classic "Lamb to the Slaughter" (short story and immortal "Alfred Hitchcock Presents" episode), as well as dark children's masterpieces like Charlie and the Chocolate Factory, The BFG, and The Witches.  During WW2, he worked with Ian Fleming and others to write propaganda to help the war effort.  He also was attached to the British Embassy in Washington, D.C., where he was stunned by American luxury: "I'd just come from the war. People were getting killed. I had been flying around, seeing horrible things. Now, almost instantly, I found myself in the middle of a pre-war cocktail party in America." Dahl later said: "My job was to try to help Winston to get on with FDR, and tell Winston what was in the old boy's mind."  (see Wikipedia)

And then there's Julia Child, who started out as an OSS research assistant and definitely moved up the ladder.  According to Wikipedia, 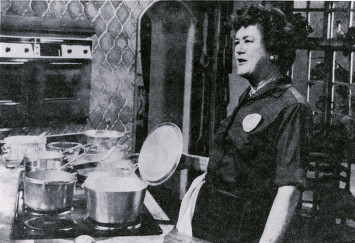 "In 1944, she was posted to Kandy, Ceylon, where her responsibilities included "registering, cataloging and channeling a great volume of highly classified communications" for the OSS's clandestine stations in Asia.[9] She was later posted to Kunming, China, where she received the Emblem of Meritorious Civilian Service as head of the Registry of the OSS Secretariat.[10] When Child was asked to solve the problem of too many OSS underwater explosives being set off by curious sharks, "Child's solution was to experiment with cooking various concoctions as a shark repellent," which were sprinkled in the water near the explosives and repelled sharks.[11] Still in use today, the experimental shark repellent "marked Child's first foray into the world of cooking..."

While I couldn't find a playable video of The Bobs' "Julia's Too Tall" song about her, I did find a couple of lyrics: "She's too tall to be a spy. But not too tall to bake a pie..."  But I disagree. I think her being too tall made her a perfect spy.  No one ever thought of Chaucer, Child, Houdini, Berg or Dahl and instantly went, Spy! which is probably part of why they were so successful.

Which raises the interesting question of why Ian Fleming - who certainly knew better - made James Bond so damned obvious.  Apparently, on November 29, 2016, Anthony Horowitz and David Farr got into a 90 minute debate as to who was the greatest spy novelist of all time, Fleming or Le Carré.  (Full Transcript.)  Horowitz' summation was that ‘George Smiley is a fascinating character. James Bond is an icon. That’s the difference.’

And that's largely true, despite the fact that James Bond was actually a horrible spy. Think about it:  He uses his real name.  All the time.  He blows his cover, every time.  He gets captured.  All the time.  And he destroys everything he touches...  There's a whole lot of things get blown up, run over, caved in, and I'm not just talking about the women.   (10-reasons-james-bond-worst-spy-.)

I don't know if John Le Carré and Ian Fleming ever met, but I do know that Le Carré had his own problems with James Bond.  In an interview in 1966 with BBC's Malcolm Muggeridge, he said, "I dislike Bond. I'm not sure that Bond is a spy. I think it's a great mistake if one's talking about espionage literature to include Bond in this category at all. It seems to me he is more of some kind of international gangster with, as it is said, a licence to kill...  he is a man entirely out of the political context.  It is of no interest to Bond who for instance, is president of the US or the Union of Soviet Republics."

Reflecting on the interview in 2010 he said : " These days I would be much kinder. I suppose we have lost sight of the books in favour of the film versions, haven't we ? I was a young man and I knew I had written about the reality in The Spy Who Came In From The Cold and that the Fleming stuff was a fantasisation of his own experiences written from the safety of New York."  (Citation) 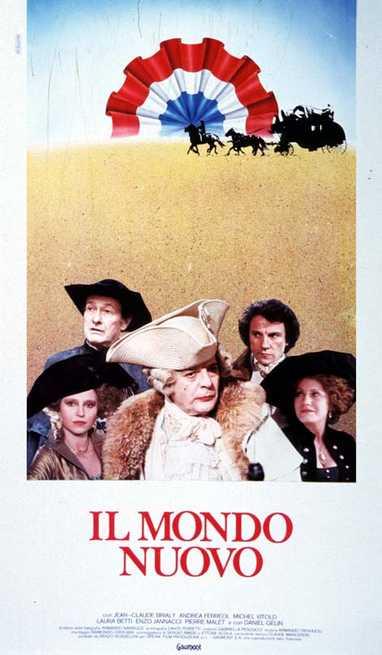 Then again, maybe it's not all fantasisation.  Fleming was notoriously heavy drinker, smoker, and womanizer.  Or perhaps he was channeling another great spy, whose womanizing, gambling, style, and sheer effrontery made him welcome everywhere, even after it was known he was a Venetian spy.  Who else, but Casanova?

It's amazing that, of all the spies, Casanova has the worst movies made about him.  With one brilliant exception.  If you get a chance, beg, borrow, or steal a copy of La Nuit de Varennes, where Thomas Paine, Restif de la Bretonne (pornographer, journalist, and philosopher, often called "the Voltaire of the chambermaids"), and Casanova and others all chase down Louis XVI and Marie Antoinette as they desperately try to escape Paris and their coming doom.  It is comical, philosophical, sexual, historically accurate, beautiful, horrific, and constantly entertaining.  The highlight is Marcello Mastroianni as Casanova in old age - still stylish, still courteous, still gallant, still arrogant... and ruefully, wearily truthful, even to himself.

I'd love to see a movie with James Bond in old age - see if he has the same grace and presence.  But then, icons don't change.  Fascinating characters do.

Oh, and yes, that's a young Harvey Keitel as Thomas Paine - it's a hard movie to beat.  Enjoy!