Dietrich Kalteis and the Process of Writing 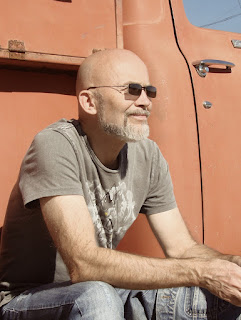 One of the things I really enjoy in the writing game is the process of writing. Both my own and other people’s. Everyone seems to do it just a little bit differently. Of course, there’s the big stuff like pantsters vs. outliners, but there’s also things like whether you try to write a specific number of words a day. And, whether I’m on a panel or reading a blog, I always find these little subtleties in the way various writers work interesting. I also often pick up pointers, so I might change how I do something or at least try something new. If it works fine, if not that’s fine too. But there’s always room to learn and grow.

To that end, I thought I’d talk to Canadian author Dietrich Kalteis about his process and his new book. Dieter’s fourth novel House of Blazes won this year’s silver medal for historical fiction in the Independent Publishers Awards. Kirkus Reviews hailed it a cinematic adventure. And Publishers Weekly called his third novel Triggerfish high-octane action that keeps readers on the edge of their seats. Crimespree Magazine said it satisfies the need for all things dark and leaves the reader breathless. The National Post called The Deadbeat Club a breakout for Kalteis, and his debut novel Ride the Lightning won a bronze medal for best regional fiction in the Independent Publishers Awards, and was hailed as one of Vancouver’s best crime novels. Nearly fifty of his short stories have been published internationally, and his screenplay Between Jobs is a past-finalist in the Los Angeles Screenplay Festival. He lives with his family in West Vancouver, British Columbia, and is currently working on his next novel. His upcoming novel Zero Avenue was released just this week through ECW Press.

So here goes, and maybe there’s something new here that will help your writing too:


Paul D. Marks: Did your new novel Zero Avenue end up as the book you anticipated writing from the start?

Dietrich Kalteis: I started with an early scene where the main character Frankie del Rey walks into Johnny Falco’s club. We learn she’s an aspiring rock star who runs dope for a dealer named Marty Sayles, and that Johnny’s club’s in financial trouble. Sparks fly between Johnny and Frankie which leads to a major conflict between them and Marty Sayles. From there, the first draft just flowed out scene by scene.

I don’t plot a story out ahead of time, so during the early chapters I never know where the whole thing will end up. As I’m writing and the story takes shape, ideas drift in for what’s ahead, and those ideas are better than anything I could come up with if I plotted the whole story ahead of time. Working this way makes writing more of an organic process for me. And these ideas can come from something I’ve experienced, or something I read or saw somewhere, and with just the right twist they find their way into the story.

It’s not the only way to write a story, but it works for me. Once I’m through a first draft, I create a timeline to make sure the sequence of events makes sense. I guess it’s a little like outlining in reverse.


Zero Avenue is your fifth standalone novel. Have you ever considered writing a series? 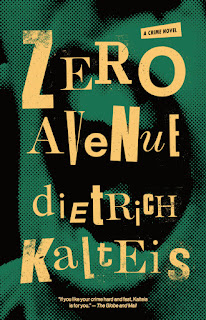 I love a good series, but I haven’t come up with one that I want to write. Right now I’m working on a story set in the dustbowl days of Kansas, and I have a first draft for the one after that: a present-day story about a guy on the run up in the Yukon. Usually by the time I finish one novel, I have the next one in my head, ready to go. I love creating new characters and dropping them in different settings and situations. Having said that, I did borrow a minor character from my first novel, and she became a main character for my second story, The Deadbeat Club, although I wouldn’t call that a series.


Your characters often come from the wrong side of the tracks, do you like taking an outlaw’s perspective?

My characters have been bounty hunters, cops, ex-cops, criminals, ex-cons and then some. They often end up in that gray area — not all good and not all bad  — no matter what side of the tracks they’re from. Some don’t follow any rules while others bend them to get what they want, or catch who they’re after. I find this helps make the characters less predictable and somewhat more realistic.

Just like in real life, nobody is all one thing. And when I drop characters in a scene, I let them take their own course and develop as the story progresses, and I try not to interfere by imposing my own values or principles.


Being a prolific writer, do you set a daily word count?

I never have a word count in mind. Typically, I pick up where I left off the day before. Sometimes I back up and rework some of the chapter I was working on the previous day, and by the end of it I may only have written a couple hundred new words. Other days I charge through a couple thousand words. The only thing that matters is that the words that end up on the page are good ones.


Do you cut and save your unpublished gems?

I used to keep a file for scenes and ideas I cut, thinking I might be able to use them down the road. That’s never happened so far, so I stopped keeping the file. Sometimes when I’m doing a second or third pass through a story, I find something that isn’t working and needs to be cut, and it’s not always easy to throw something out, but I’ve come to realize there are always fresh ideas coming.


You’ve written crime novels set in present time and some that are historical. What determines the setting?

It comes down to what suits the story. For Zero Avenue I liked the anger of the punk rock scene, and Vancouver was this sleepy backwater town back in the late seventies. And that combination just seemed the perfect setting for the story I had in mind. Also the late seventies was a time before Google Earth and satellite imagery, making it easier to hide some pot fields, which was necessary to the story.

I’ve written stories set in present-day Vancouver, and I like the setting since it hasn’t been overused in crime fiction. Also, the city’s a major seaport sitting on the U.S. border, and that’s just begging for a crime story.

For House of Blazes I set the story in San Francisco in 1906 at the time of the big earthquake. It was a time of debauchery and corruption, and it also had a wild west meets a modern city feel to it. Some people rode into town on horseback carrying sidearms while others drove cars wearing three-piece suits. After the earthquake hit, the fires that swept the city for three days took on a character feel as they raged and forced people to run for their lives.

I’m pleased to have a story included in the upcoming Vancouver Noir, part of Akashic Books’ Noir Series, edited by Sam Wiebe.

The next novel to be released is Poughkeepsie Shuffle, due out next year from ECW Press. It’s set in Toronto in the mid-eighties and centers on Jeff Nichols, a guy just released from the Don Jail. When he lands a job at a used-car lot, he finds himself mixed up in a smuggling ring bringing guns in from Upstate New York. Jeff’s a guy willing to break a few rules on the road to riches, a guy who lives by the motto ‘why let the mistakes of the past get in the way of a good score in the future.’

Thanks for stopping by, Dieter. And good luck with the new book.

Please check out the interview Laura Brennan, writer, producer and consultant, did with me for her podcast, where we talk about everything from Raymond Chandler and John Fante to the time I pulled a gun on the LAPD and lived to tell about it. Find it here: http://destinationmystery.com/episode-52-paul-d-marks/