"She picked me up in the mornin' And she paid all my tickets.
And she screamed in the car,
And left me out in the thicket.
Well, I never would have dreamed
That her heart was so wicked.
Well, I'm goin' back tonight,
'Cuz it's so hard to kick it."

"It was nearly summer,
We sat on your roof.
Yeah, we smoked cigarettes,
And we stared at the moon.
And I showed you stars
You never could see.
It couldn't have been that easy
To forget about me."

-Tom Petty, "Even The Losers"

Someone a whole lot more articulate than I once said, in effect, that art was simply stepping into the spotlight and telling the truth. By that definition, rock icon Tom Petty, who died Monday at age 66, defined "art."

Petty probably wouldn't have cared for that description. Not a pretty face, uninterested in cultivating either connections or an artist's image, Tom Petty died counting the likes of Bob Dylan, Bruce Springsteen, Stevie Nicks, Jackson Browne, Roy Orbison (until his death), George Harrison (ditto), and many, many others as friends and collaborators. It was an irony worthy of a Tom Petty song.

And it was a long, long road from his origins in Gainesville, Florida as the son of an alcoholic and abusive father who beat him mercilessly throughout his childhood. A brush with fame in the person of a meeting with Elvis Presley (who was in town to shoot a movie) during his early teens is supposed to have provided the spark that lit the fuse on Petty's towering ambition. Petty scoffed at the notion in later interviews.

This is not to say that Tom Petty was not ambitious. On the contrary, bandmates in the late-60s blues-rock outfit Mudcrutch marveled years later about how Petty had more ambition than native musical talent. Petty himself was known to joke about how as a lead guitarist he was actually a pretty good rhythm guitarist. He didn't play a solo on any of his albums until he laid down the lead track on "You Don't Know How It Feels" for his 1994 album  Wildflowers.

None of that mattered, though. Tom Petty's art was in the songs he wrote, and in the crystal clarity of how he envisioned them sounding in the final cut. In service of that vision he surrounded himself with musicians possessed of a particular set of chops. Two key players in Petty's long-time band The Heartbreakers were guitarist Mike Campbell and keyboardist Benmont Tench.

It's Tench whose swirling organ kicks off the iconic "Refugee" on 1979's Damn the Torpedoes, considered by many to be Petty's breakthrough album. Campbell's searing guitar leads provide the counterpoint of a call-and-response with Tench's keyboards, and hovering over it all is Petty, whose trademark wail both sells and punctuates the lines:

"Baby, we ain't the first.
I'm sure a lot of other lovers been burned.
Right now this all seems real to you, but it's
One of those things you've got to feel to true."

Petty's music contained on-going homages to the likes of country-rock stalwarts such as the Byrds (whose lead-singer Roger McGuinn, tapped Petty to collaborate with him on his 1991 "comeback" album, Back From Rio.), the Buffalo Springfield, Bob Dylan (another frequent collaborator, and not just with The Traveling Wilburys), Del Shannon (Ditto), and yet still managed to be strikingly original. And his lyrics dealt with universal themes usually having to do with the personal consequences springing from one's life choices.

"Refugee," his most recognizable song, is about not being a victim. Petty the child abuse survivor was many things, but never that. Other songs such as "You Got Lucky," "Change of Heart," and the above-referenced "Even the Losers" are often bitter ruminations on the cost of relationships. Still others, like "The Waiting," and "Deliver Me" are the exact opposite: hopeful, even optimistic: 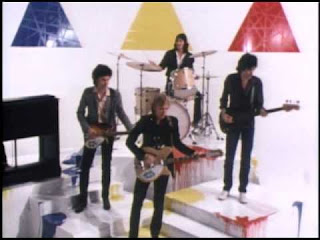 
And Petty knew about fights. After suing his first record company over the disastrous deal he'd made with them (he won), he went on to immediately piss off his next one by nearly naming his latest album The $8.98 Record Album in order to keep the record company from jacking the price of his records to $9.98 in the wake of the success of Damn the Torpedoes. The record company caved, and the album (which contained "The Waiting") was eventually released as Hard Promises.

And his fans loved him for it.

When he died on Monday, Tom Petty was fresh off a 40th anniversary tour with The Heartbreakers. At 66, he had survived abuse as a child, exploitation by rapacious record companies, the destruction by fire of his large Southern California home, and the disastrous spiral of his first marriage downward into serious drug addiction for both himself and his ex-wife.

He had always come back with an answer to these big life challenges: leaving his parents' home at seventeen and decamping for California while "Runnin' Down a Dream," Damn the Torpedoes for his first record company. Rebuilding his burned-out house. And finding sobriety and love with the second wife who now survives him.

And when he was found in full cardiac arrest late Sunday, it even seemed as if he might pull back from the brink yet again, as reports of his death were initially hotly contested when they broke on Monday.

The refrain from the last song on Petty's 1982 album Long After Dark runs like this: "Don't have a wasted life." Looking back on his impressive body of work, it's pretty damned clear that Tom Petty took his own advice.
Posted by DoolinDalton at 03:00