Now It Gets Personal

Two weeks ago, I discussed Connecticut crimes that span our country's history. Several were grim "firsts," and they prove that you don't have to set a crime story in the Big Apple or LA.

But when people ask--as they invariably do--"Where do you get your ideas?" I have answers that hit closer to home. Postcards of the Hanging grew from a crime in the town where I attended high school half a century ago, but today I want to talk about other crimes that shocked Connecticut. I know or knew people who were involved in all of these, and even though I changed every possible detail, two of them have inspired novels...so far.

It's probably an urban legend, but New Britain, CT claims to have more package stores (liquor stores to you tourists) per capita than any other city in the United States. On October 19, 1974, Ed Blake felt ill and closed his Brookside Package Store early for the first time anyone could remember. It probably saved his life.

Two career thugs decided that holding up a New Britski packy would mean good money on a Saturday night. When they found their target closed, they went next door to the Donna Lee Bakery, where a customer called one of them by name. The men could have turned around and walked away, but instead they forced all six workers and patrons into the back room and shot them. They raided the cash register and fled, gaining less than twenty-five dollars for their efforts.

Passersby noticed their car and license plate, and police tracked them down within hours. They served long terms in Somers, Connecticut's maximum security penitentiary (one died of cancer a few years ago), but it didn't bring back the victims. One was the cousin of my assistant principal. Two others had a son in my junior English class. Ed Blake's son was a former student, too.

I've never used that story. You don't always gain insight by trying to analyze a horrific event. Evil is simply banal and stupid, and sometimes it comes down to unfortunate people being in the wrong place at the wrong time.

By the early nineties, NBHS, designed for 1600 students in 1973, had an enrollment of 2800. It also had turf wars between the Latin Kings, Los Solidos, and 20 Luv, all of whom wanted to control drug sales in the area. The President of the Latin Kings, Miguel deJesus, was no scholar but he caused no trouble in my fifth period comp & lit class, aside from doing no work. Other teachers had less luck with him, and his guidance counselor told me they were less sociopathic than I was.

On November 4, 1993, a car dropped Miguel off at the Mill Street entrance, directly below my classroom's window (circled in red). 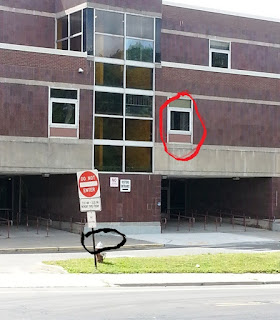 He came early to be readmitted after a ten-day suspension for fighting. As he approached the double doors, a stolen car pulled into the driveway and a man wearing a hoodie put a handgun against the back of Miguel's head and shot him six times (the black circle on the picture). Dozens of witnesses saw the car, which was later found abandoned, but it took nearly two years of detective work before the shooter and driver were caught. Two members of rival gangs died in the next week, and police barely managed to contain an all-out gang war. Miguel was the first of three gang members I lost over the next three years. 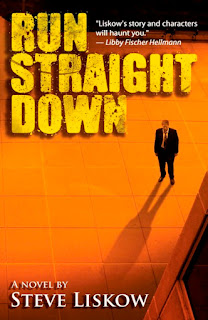 Run Straight Down changed every detail, but it grew from that shooting. I focus on the teachers who had to go back into the building the next day and make it safe for the kids...when we all knew damn well that everything was broken.

After retiring from teaching, I read newspapers to the blind for several years, but in summer of 2007, a federal trial took place in Hartford without a word about it appearing in print. The jury eventually convicted Dennis Paris, alias "Rahmyti," of assault, drug trafficking, extortion...and over 2500 counts of trafficking under-aged girls along the Berlin Turnpike. 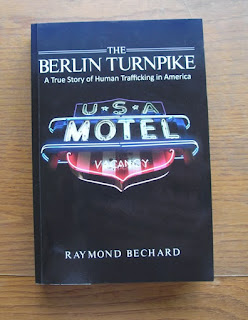 Raymond Bechard's book about the case includes transcripts in which the women are asked over and over if Paris knew they were between 14 and 17 while he forced them into as may as ten liaisons a day. They said "yes" over 300 times. The case convinced the federal government to rewrite the existing law so that if the person was underage, it didn't matter whether the trafficker knew that or not.

The Berlin Turnpike had been notorious for decades (I live less than a quarter-mile from the highway), and I revising Cherry Bomb when I bumped into Bechard at a signing and discovered that his girlfriend was a cousin of one of my former teaching colleagues (and another sister who had been a student). Through him, I got to do a phone interview with one of the "witnesses" to clarify details of prostitution from the woman's perspective. 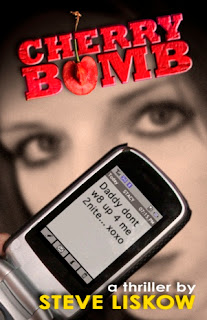 Dennis Paris's defense counsel was Jeremiah Donovan. His trial was in session when two men invaded the Cheshire home of Dr. William Petit, a case I mentioned two weeks ago. Donovan later defended one of those men, too.

In March of 1998, disgruntled worker Matthew Beck, on leave for emotional problems, returned to the CT Lottery headquarters in Newington, armed with two handguns and a knife. He killed four workers. Lottery President Otho Brown lured Beck away from the building to give other workers a chance to take cover and call for help before Beck trapped him in a fenced-in parking lot. Survivors called Brown the hero who saved their lives.

Others weren't so lucky. Beck shot Linda Blogoslawski Mlynarczyk, formerly the first female mayor of New Britain, in her office. New Britain had a 21% Polish population, third in the nation at that time, and Linda literally walked through neighborhoods knocking on doors to talk with residents. She met her soon-to-be husband Peter when he helped her run her campaign. Over 1000 mourners attended the woman's funeral during a cold heavy rainstorm, the same day Mlynarczyk's farewell to his wife appeared on the front page of the Hartford Courant. It hurt like hell when I realized he now wrote even more eloquently than he had years before...as another student in my class.

Playwright Marsha Norman advises writers to write about the things in your life that still hurt, that still feel unfair and make you angry.