The Writer and the Dragon


by Melissa Yi
I don’t want to write.

It’s a strange thing for me to say. I have been writing stories since I could hold a pencil. I remember transcribing stories for my friends in grade one, in self-taught cursive. When the teacher realized what I was doing, she said, “I don’t know what I’m going to teach you,” and walked away.

I realize that my reluctance to write at the moment is largely dependent on my energy levels. On Saturday, I penned an unexpectedly popular Facebook post about how doctors are getting cut to the bone. For example, on any money I manage to save for my own retirement (because I have to fund my own maternity leave, sick leave, retirement, the whole shebang), the Canadian government now wants to increase its taxation rate to 38%. After that post, I wrote 500 words, did a bit of yoga, and popped in to the ER for my day shift.

When I came home, I was so tired that my daughter was reading me interesting facts about bugs, and I fell asleep. It was the first time that my six-year-old read me to sleep.

On Sunday, I didn’t write, procrastinating for hours, until finally I described a fictionalized case I'd seen, and then I shut my computer down and asked who wanted to come with me to see a gigantic dragon-horse and a spider battle in the streets of downtown Ottawa.

“I don’t want to drive for two hours,” said my son. Actually, it’s more like three. 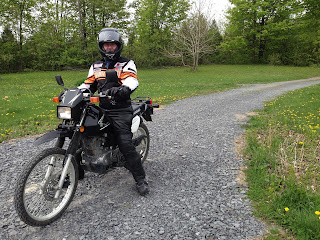 “I want to mow the lawn and get my motorcycle put back together,” said my husband.

“After I eat,” said my daughter. Score!

We were super late, and the real battle was finding parking and trying to wade through thousands of people streaming in the opposite direction while Anastasia and I held on to each other, a stuffed sheep, a lunch bag, and my purse.

When we finally caught up to Long Ma, the dragon-horse, we were walking its wake, in the hot sun, while bathing in its exhaust.

It was nice to see it spread its wings and bawl and emit smoke from its head, but I was pretty sure Anastasia was hot and tired and couldn’t see much of anything. (“Do you see the wings?” “No. Oh. Oh, yeah.”)

Unfortunate. I was stoked about witnessing the North American debut of La Machine, the street artists from Nantes, France, headed by François Delarozière, but we ended up hot and tired and facing the exhaust from its hind end. 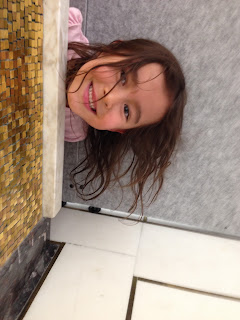 So we stopped, and Anastasia drank her milk, and it turned out the Library and Archives Canada was open, in all its air-conditioned glory, so we could refill our water bottles, use the facilities, and listen to recordings of “Sweet Canada” and “Jack Canuck.”

Mostly, Anastasia hid in a crevice and played with a magnetic board game, but it made me realize why tourists love coming to Canada: it’s safe, it’s clean, and so many things are free. I relaxed, sitting with her, playing her game, instead of worrying about writing. Anastasia had plenty of stories of her own. After about five minutes of playing the game the prescribed way, she called one of the peg people Donald Trump and booted him into the ocean. 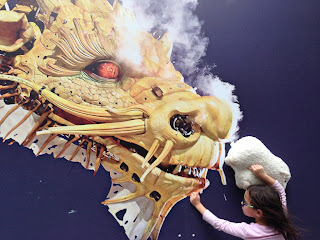 Then she wanted to eat at Tim Horton’s. I found one on Queen Street that was open 24 hours, and I people-watched the entire time, from little kids running in the street to a homeless-looking man buying food and giving it to someone else.

I realized that this whole trip was a metaphor for the writing life. You launch your books/stories/articles. You’re hoping for something like La Machine’s crowds, where 750,000 people cheer you on. This is unlikely.

But you try. You keep building. And in the meantime, you try to enjoy the small pieces and pauses around your art, like your daughter pretending to punch Long Ma in the face. Because there are no guarantees in writing, or in life in general, so you might as well relish the ride.
Posted by Melissa Yi at 00:00