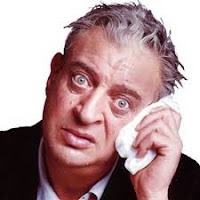 Whodunits sometimes seem like the Rodney Dangerfield of the mystery world: They don't get no respect. When people want to make fun of mysteries, they usually make fun of whodunits (probably because these people don't actually read mysteries, so they think all mysteries are whodunits). Even people who do read and enjoy mysteries often look down on whodunits, seeing them as hopelessly formulaic and old fashioned, as not nearly as smart or daring as their cool noir cousins. How often are unabashed whodunits nominated for Edgar awards? To be honest, I can't answer my own question, because I don't keep careful track of such things. But most of the Edgar winners and nominees I've read aren't whodunits. (I've wondered if some of them were really any sort of mystery--but that's a subject for another post, one I'll probably never write.)

Well, I'm unsophisticated enough to admit I love a good whodunit. Most of my favorite mysteries are traditional whodunits--and most of them were written many years ago, back when more people took whodunits more seriously. When I come across a new whodunit that tells an absorbing and believable story, plays by the rules, and still manages to deliver some surprises at the end, I'm both delighted and impressed. And, partly because I love well-done whodunits so much, I get seriously irritated by ones that don't play fair, ones that make things too easy for the detective (and the writer). Here are some of my pet peeves. I won't claim they're anything more than pet peeves, won't try to argue I'm objectively right. I'm simply going to list some things that get on my nerves. Maybe they get on your nerves, too.


I could go on. I love good whodunits so much that I have lots of other pet peeves about lazy ones. I'd better stop here, though. I may have already reinforced the stereotype that whodunits are hopelessly formulaic and old fashioned, governed by rigid rules set down nearly a century ago. But some of the rules Van Dine, Knox, and others proposed no longer hold writers back (if they ever actually did). The rules saying whodunits shouldn't have a "love interest" have faded from significance, for example, as have the ones forbidding "subtly worked-out character analyses." The rules whodunit purists still cite with approval are the ones that helped shaped the genre, and they boil down to two simple principles: Be reasonably realistic, and play fair. A whodunit, when it's done right, presents detectives, writers, and readers with difficult but possible intellectual challenges. We're cheating if we make our detectives' job too easy, and we're cheating if we make our own job too easy, too. We shouldn't shower our detectives with unearned clues. And while misleading and surprising readers are essential parts of our job, we shouldn't accomplish them by bombarding readers with completely irrelevant red herrings, or by withholding vital information until the last possible moment. We should treat the whodunit form with more respect. If we do, maybe, just maybe, others will respect it more, too.

Do you have pet peeves about whodunits, or about other kinds of mysteries? I'd love to hear them.
Posted by Unknown at 00:00