The Black Orchid Award and the Rebirth of the Novella


So, come to find out that not one, but two of my fellow Sleuthsayers have not only successfully
written and sold novellas, they are both winners of the prestigious Black Orchid Award handed out annually for one lucky novella writer by the official Nero Wolfe fan club, The Wolfepack. These intrepid Sleuthsayers, Rob Lopresti and Steve Liskow.

Now, who better to ask about their process for writing novellas than successful, award-winning novella-ists?

Read on for the first part of the interview, conducted completely by email, and tune back in for round two in two weeks!

First off, why a novella?

Rob: The Wolfe Pack and Alfred Hitchcock’s Mystery Magazine co-sponsor the Black Orchid Novella Contest, which intends to promote the form in which Rex Stout wrote so many Nero Wolfe tales.  My friend James Lincoln Warren asked me to be a first reader for his entry which I was happy to do.  He won.  It’s tempting to go for an easy joke and say “So I decided anybody could do it,” but I knew better. I had never written anything in that length, and besides, James is beaucoup talented.

I should say that Rex Stout is one of my favorite mystery writers (the other being Don Westlake) but – dirty little secret – I have never cared for most of his novellas, which feel like ghostly imitations of his novels.  But I certainly know his plot structure and I decided to give it  a try.  And I won.

Steve: I've only tried two novellas and they both won the Black Orchid award, but they came from opposite directions. Novellas used to be popular, and they're slowing coming back, maybe for a number of reasons and advantages.

First, they demand less time to write than a full novel. You're looking somewhere between 20 and 40 K words, and my novels are usually low 80K, so there's less time to plan, write, and revise. Second, since people are often on the go, they like a story they can read in a shorter time, such as on the plane trip for business round trip. And with the advent of eBooks, you can sell a shorter separate work without the production costs that would make unit pricing a problem in the old days. A friend of mine has published six or seven eBooks, all novellas between 120 and 160 pages over the last three years. They're about five bucks each and if she published them on Create Space (I don't know if she did), she's making 70% royalties. That's a nice return for a lesser effort. I know Rex Stout used to produce books with two or three novellas and maybe a short story for a standard-length book. They're a problem for magazines because they mean fewer other stories have room, but the advantages are becoming more evident to more people. And someone pointed out on Sleuthsayers a few days ago (maybe John Floyd?) that there are now a few publishers producing novellas.

(Interviewer's note: That was me. And I interviewed one of those publishers a couple of weeks back. You can find that interview here.)

Did you initially set out to write a novella full-on, or did you decide to expand a short?

Rob: As I suggested above, I set out to write something for the Novella contest.  The hard part was: what did I know enough about to write a long story about?  Libraries?  Not interesting enough.  Archaeology?  Love it but I don’t know enough.  Folk music? I already wrote a novel about that, set in Greenwich Village in 1963 and- hey!

I had my idea.  Go back a few years in Greenwich Village history.  Create a beat poet who solves crimes for pay.  And – this was the part that sold me on it – in the inevitable Wolfean gathering-of-the-suspects at the end – my hero would do his revelation in improvised free verse.  “The Red Envelope” won the BONA and was published in Hitchcock’s.

Notice that title, by the way.  It is a hat-tip to Rex Stout’s The Red Box.  I hope to write more 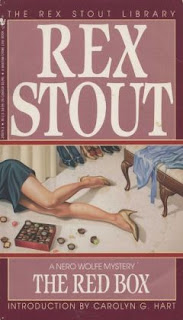 novellas about Delgardo the poet, and my plan is to name each one after a different Wolfe novel or novella.  Chronologically I  want to move ahead one month each time.  “The Red Box” is set in October 1958.  The next one, which is most of the way through a first draft, involves something that really happened that November.

Steve: Neither of my novellas started that way. "Stranglehold" was a 6800 word short story that didn't quite work. There were too many characters at the beginning for readers to keep track of. When I tried to cut some of them (and the word count), the story fell apart. The story was longer than a lot of markets would take (this was about 2007-8), so when they turned it down, I had a story I couldn't sell anywhere. Then in 2008, I heard about the Black Orchid Novella Award. I'd read a lot of Rex Stout because he was one of my mother's faves, and remembered liking the voice and tone, so I wondered if I could expand the story and introduce the characters more gradually. I only added a couple of scenes and expanded everything else, and it worked. In fact, I remember adding 9000 words in less than a week because the whole thing seemed to be a novella waiting for me to recognize it. Once I added the length, I didn't do much other revision. By then, the earlier version had gone through about 20 drafts so I knew pretty clearly what needed to be there and what could go away. The more I look at my novellas, the more I understand how much Stout's and Archie Goodwin's voice influenced me. I grew up in the Midwest (Michigan), and if I remember correctly, Archie supposedly did too. Maybe that's why the form felt comfortable when I tried it.


"Look What They've Done To My Song, Mom" came from the other direction. "Stranglehold" was supposed to be a short story continuing the adventures of Chris/Woody and Meg, who had already shown up in at least two unsold novels (I later self-pubbed one and changed the other to the Zach Barnes Connecticut series, where it worked much better), and I was actually trying to come up with a novel as a sequel for the winning novella. I had the possible plagiarism plot but was stuck on subplots that really interested me. Valerie the ex-stripper/receptionist would have had a bigger role, but I wasn't sure exactly how or why. The vague idea sat around in my files for about three years, and then Alfred Hitchcock published one of my other stories and I received my author's copy within days of receiving a rejection from them for something else. I was really hoping they'd take the story, so I was pretty disappointed. BUT I saw the announcement of the Black Orchid again and thought to myself, "well, I've got a sequel to a winner I haven't been able to flesh out, so maybe I can do it as another novella."  I think I wrote the first draft in about a week and only did about three or four more drafts--very few for me. Something I'm beginning to understand about novellas is that you can work with about one subplot instead of several, and if you have five or six rich scenes with a lot going on, you're pretty much there. My theater experience working on low budgets meant I was drawn to plays with few set/scene changes (director, producer, frequent sound design, rare light design). That helps a lot when you're trying to be concise because it shows you how many or how few locations you really need. And I still write cheap: cut the locations, cut the props, cut the extra characters. Get to the end, then go back and figure out what's missing that people will ask about.

See you in two weeks!
Posted by DoolinDalton at 00:55